Bitcoin drops below $10,000 again, hitting lowest in a week 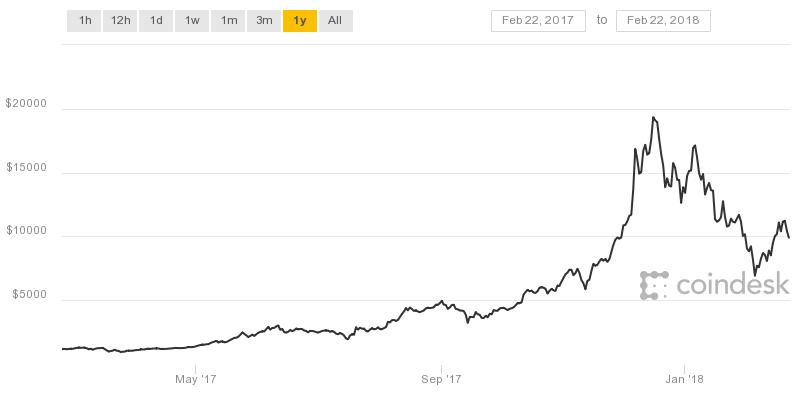 The cryptocurrency fell below the psychologically key level Thursday, failing the latest attempt to recover from a sharp sell-off in the last several weeks.

Bitcoin dropped about 5 percent to a low of $9,878.72, its lowest level in a week, according to CoinDesk’s bitcoin price index, which tracks prices from four major cryptocurrency exchanges.

This is the second straight day of declines and the first time bitcoin has dropped below $10,000 since last Friday.

Nick Kirk, quantitative developer and data scientist at Cypher Capital, a cryptocurrency trading firm, said there was no specific reason for Thursday’s decline.

Some analysts have predicted that recovering a level such as $10,000 would bring in more buyers.

Bitcoin briefly fell below $6,000 earlier this month but has since recovered. Earlier this week, the cryptocurrency broke above the $11,000 mark for the first time since late January, helped by better regulatory sentiment out of South Korea. There were fears of an outright ban in that major market for bitcoin but new measures announced were less strict than investors had anticipated.

The price of bitcoin has roughly halved since its climb to almost $20,000 in December. The cryptocurrency is down nearly 29 percent in 2018, but remains more than 740 percent higher over the last 12 months.

In its latest action to crack down on cryptocurrency fraud, the Securities and Exchange Commission charged former cryptocurrency exchange BitFunder and its founder with fraud. The commission alleged that BitFunder and founder Jon E. Montroll ran the operation as an “unregistered securities exchange” and defrauded users of that exchange, according to a statement.

The charges highlight uncertainty surrounding whether or not bitcoin and other cryptocurrencies should be classified as securities, and it’s unclear whether the coins are utility tokens or securities that would fall under the SEC’s oversight.

Other headlines earlier in the week added to negative sentiment. On Tuesday, Japanese cryptocurrency exchange Zaif said an error with its price calculation system allowed seven users to buy some digital coins for zero yen.