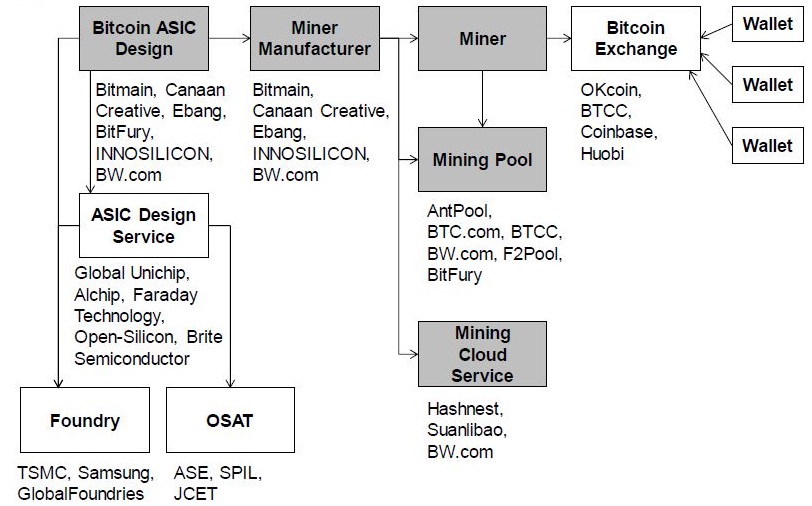 A secretive Chinese start-up called Bitmain that dominates the bitcoin “mining” industry likely made as much as chipmaker Nvidia did last year, Bernstein analysts estimate.

Based on conservative estimates of gross margin of 75 percent and operating margin of 65 percent, the analysts calculate that Bitmain made $3 billion to $4 billion in operating profit in 2017. Bernstein’s U.S. semiconductor team estimates Nvidia’s operation profit was $3 billion during the same period.

“But Bitmain achieved this in merely four years, while it took Nvidia 24 years to get here,” the Bernstein analysts said in a report published Wednesday.

Beijing-based Bitmain was founded by Jihan Wu and Micree Zhan in 2013. The company has since grown into one of the primary firms involved with bitcoin mining, the process of using computing power to generate bitcoins. Wu is also a widely followed figure in the bitcoin world.

In the early days of bitcoin, enthusiasts could use ordinary video graphics cards to profitably process computations needed to mine the cryptocurrency. But a Chinese-based company turned bitcoin mining into a specialized process in 2013 by selling application-specific integrated circuits, or asic, computer chip cards that could mine bitcoin 50 times faster than traditional video graphics cards.

Today, Bitmain sells Antminer bitcoin mining rigs that can cost several hundred dollars to a few thousand dollars each. The company also operates “mining pools” in which participants collaborate on bitcoin mining in order to cut costs. As a result, Bernstein estimates Bitmain has 70 to 80 percent of market share in bitcoin miners and asics.

The analysts estimate that most of Bitmain’s revenue was generated by selling miners powered by the company’s chips. “The rest was largely generated by mining itself and, to a much lesser extent, by collecting management fees from the mining pools it operates and renting out the mining power of its mining farms through cloud services.”

Much of the growth in mining revenue came from the exponential rise in bitcoin prices, the Bernstein report said. Its analysis also indicated that “Bitmain shrewdly adjusts the prices of miners according to bitcoin prices.”

So as bitcoin skyrocketed toward $20,000 late last year, the price of Bitmain’s AntMiner S9 climbed near $5,000 while production costs remained the same, according to Bernstein’s estimates.

To come to the final $3 billion to $4 billion operating profit figure, the Bernstein analysts also looked at Bitmain’s purchases from Taiwan Semiconductor Manufacturing and estimated the start-up contributed 2 to 3 percent of the chipmaker’s total revenue last year.

“In the year 2018, Bitmain will likely lead the cryptocurrency asic industry and migrate some of its chips to 10nm and the most advanced 7nm,” the report said. “That will make the company one of the top five users of TSMC’s 7nm in 2018, with demand comparable with Qualcomm’s, HiSilicon’s, or AMD’s.”

But longer-term growth is not guaranteed, especially in the fickle cryptocurrency world. Bitcoin has lost half its value in about two months amid worries about a regulatory crackdown.

Chinese authorities have taken some of the strongest actions so far by banning initial coin offerings and causing local bitcoin exchanges to close.

Bitmain has taken strategic steps to stay ahead of the game.

The company launched a mining pool subsidiary last April in Israel, and is opening mining farms in Canada and Switzerland, and regional headquarters in Singapore, the Bernstein report pointed out. Bitmain is also expanding its business to other cryptocurrencies such as ethereum and monero.

The Bernstein analysts say the Chinese company also has a “massive cash position” that should help it through sluggish periods in the industry. And in its main bitcoin mining business, Bitmain protects itself from losing too much to investor speculation by selling chips to miners, rather than doing all the bitcoin mining itself.

“Some money is left with customers, but so are a lot of risks,” the report said. “The results, in our view, have been remarkable.”