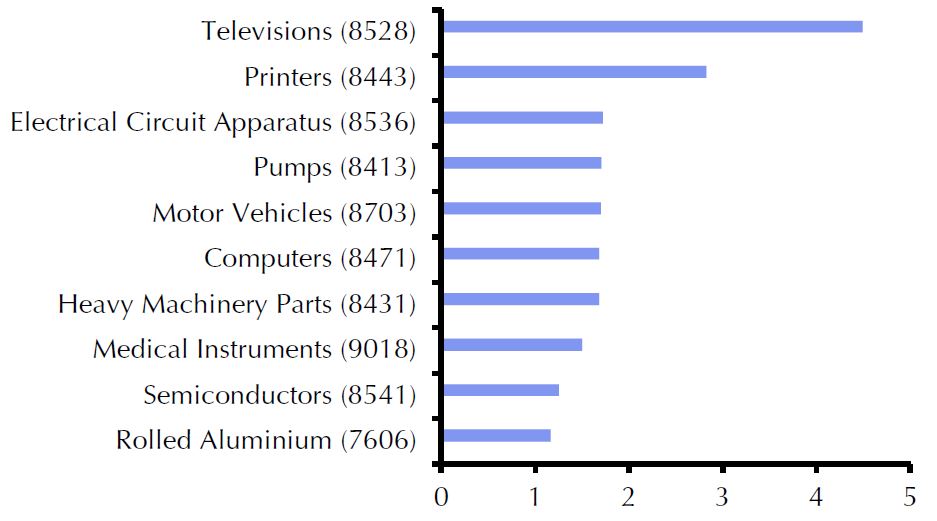 Prices for big-screen televisions and some household appliances could go up significantly if the Trump administration’s proposed tariffs on Chinese imports are enacted.

“On a $4,000 TV … the tariffs might have a several-hundred-dollar price impact,” said David French, senior vice president for government relations at the National Retail Federation, an advocacy group.

“We’re still assessing the list,” French said. “There is machinery involved in consumer goods. … There are chemicals listed that we believe are components of cosmetics and toiletries.”

US imports from China of goods subject to proposed tariffs ($ billions, 2017)

The Office of the U.S. Trade Representative proposed late Tuesday an additional 25 percent tariff on an extensive list of Chinese imports, valued at $50 billion for the year and ranging from aircraft parts to vaccines. A public hearing on the list is scheduled for May 15, and filing requests to appear and comment are due April 23.

Here are some of the consumer-related goods that appeared on the list:

“Some goods won’t be imported at all with a 25 percent tariff, but prices of domestic goods will go up the full amount of the tariff,” said Nicholas Lardy, a senior fellow at the Peterson Institute for International Economics in Washington.

But he and other analysts pointed out that for a U.S. economy roughly $18 trillion in size, 25 percent tariffs on $50 billion of Chinese imports will have a relatively small effect overall on consumer prices.

For example, it is not clear the extent to which tariffs would affect imports of dishwashers.

Chinese manufacturer Haier, which acquired GE Appliances in 2016, “only imports a very small number of niche dishwashers designed for small spaces,” spokesperson Kim Freeman said in an email to CNBC. “We make about 95 percent of our dishwashers in the U.S. in Louisville, Kentucky.”

“At this point we are not sure what the impact on consumers will be,” Freeman said.

The National Retail Federation estimates that access to imported goods through free trade agreements boosts the purchasing power of the average American family by $18,000 a year.

“It’s going to be very difficult for the retailer to manage their supply chain in order to handle these tariffs,” French said. “Consumers may be price sensitive enough that they may slow their holiday purchases. These may be ‘Grinch’ tariffs.”