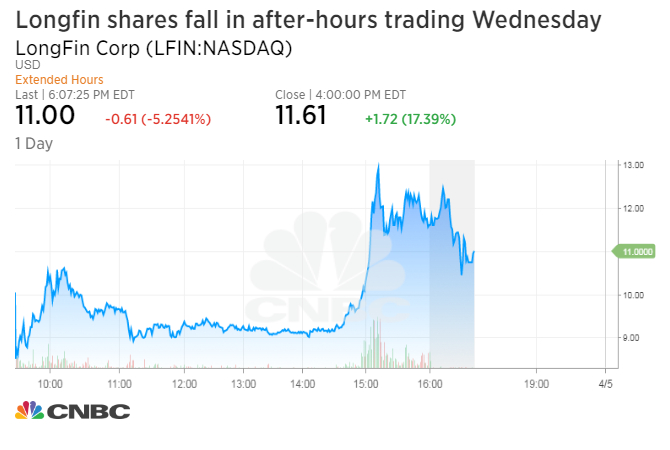 The head of a small company that has attracted controversy over its ties to cryptocurrency said that he is not going to sell his shares while he is fighting $1.4 billion in bets against the stock.

“I’m not going to sell [for] the next three years,” Longfin CEO and Chairman Venkat Meenavalli said Wednesday on CNBC’s “Fast Money.” “I’m standing on [sic] my statement.”

Shares of Longfin (Ticker: LFIN) briefly fell more than 5 percent in extended trading Wednesday following Meenavalli’s comments. The stock has fallen more than 90 percent from an all-time high hit in December, and volatility has picked up in the last two weeks following several negative headlines, including a tweet from noted short-seller Andrew Left’s Citron Research.

Short sellers look to profit on a decline in prices by borrowing and then selling shares in expectation they can buy them back cheaper later. About 14.6 percent of Longfin’s shares available for trading are sold short, according to FactSet.

“I’m going to write to SEC and FINRA because of the shorts,” Meenavalli said, referring to two major U.S. financial regulators.

“We got information, we have a special investigation. … According to us there are 28 billion shares shorted of $1.4 billion dollars bet against me,” he said. “The guys are going to destroy us. I’m fighting here.”

Ahead of the show, Longfin shares had closed nearly 17.4 percent higher at $11.61 a share. Trading was briefly halted for a volatility circuit-breaker in the afternoon following CNBC’s announcement that Meenavalli was set to appear on “Fast Money” later that day.

The stock is still down more than 30 percent this week. The company disclosed late Monday in an 10-K filing the SEC’s Division of Enforcement is investigating trading in the Longfin’s shares and has requested documents related to its IPO and acquisition of Ziddu.com, which says it’s a microlending company using the same blockchain technology as bitcoin.

Shares at one point in December had a market value north of $3 billion. That “market cap is not justified” and “is not a reality,” Meenavalli said the day it hit that valuation in December on CNBC’s “Fast Money.”

Last week, shares dropped 75.7 percent after the Citron tweet and news that FTSE Russell was removing Longfin from its benchmark Russell indexes due to insufficient free-floating shares. Meenavalli told CNBC in a phone interview last week the company is “reapplying” for inclusion in the indexes and it would “take legal action” against Citron after filing its 10-K.