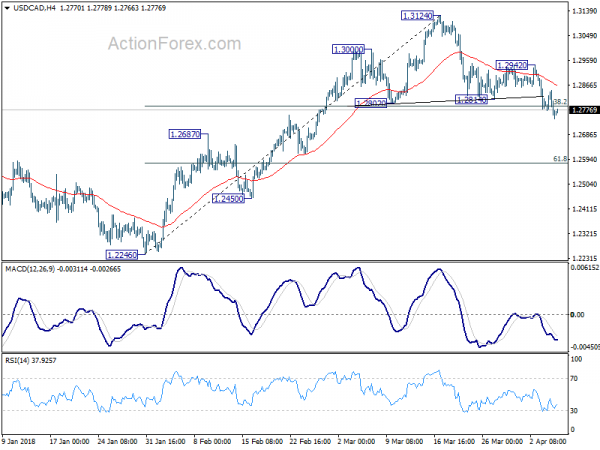 While the initial selloff in US stocks were steep, they quickly recovered and didn’t look back. DOW made a massive 700 pts come back from session low at 2523.16 to close at 24264.30, up 230.94 pts or 0.96%. Nikkei followed and staged a strong 1.5% rebound. For now, the first set of the first battle of US-China trade war is done. The Donald Trump led government and China have both unveiled their cards. But no implementation date for the tariffs are set as US will need to go through the process of public input till May 22. China certainly won’t have any drastic action before the US concludes the Section 301 tariffs. Hence, it’s now time or the markets to focus back on other issues first.

In the currency markets, Canadian Dollar is lifted by positive NAFTA news and is trading as the strongest one for the week. The Loonie is maintaining gains throughout Asian session. Swiss Franc and the Japanese Yen are the weakest ones on flip-flop of market sentiments. While Dollar recovers today, it’s staying mixed for the week.

Technically, USD/CAD’s break of 1.3065 fibonacci support should confirm near term reversal and more downside should be seen ahead. EUR/USD is still on course for 1.2238 support and below despite yesterday’s recovery, as it’s held well below 1.2344 resistance. There are two main focuses for today. Firstly, USD/CHF is going to take on 0.9626 key fibonacci resistance. GBP/JPY will also has another test attempt on 150.92 cluster resistance too.

St Louis Fed President James Bullard said yesterday that now, federal funds rate at 1.50-1.75% is closer to “neutral” than in previous years. And it’s “no necessary” to raise policy rate further as “inflation is already below target”. And the surprised growth in 2017 has “stalled so far in 2018”. Regarding US trade policy with China, Bullard said it “increases the uncertainty around the forecast”. Nonetheless, to him, it’s ” too early to tell what the actual impact will be on the U.S. economy.”

Fed Governor Lael Brainard also said yesterday that trade policy is a “material uncertainty” to the economy outlook. She added that “it’s very hard to say now, how that could evolve — but it’s certainly something that I take into account, in thinking about risks.”

According to research paper by the Dallas Fed, the 232 steel and aluminum tariffs would likely “trim a quarter percent” from the US GDP over the long run. While the “metal industries would likely expand”, heavy industries like machines and equipment would “probably contract along with aggregate capital formation.” It warned that the main risks lie in the potential for “retaliation” and the possibility of a “trade war”. Full research here.

Canadian Dollar strengthens again on positive news regarding NAFTA renegotiation. It’s been reported repeatedly that Trump is pushing to have a draft NAFTA agreement by next week. For now, there are so many outstanding issues that it’s impossible to have a full agreement that soon. But there is a chance of a “symbolic agreement” signalling some consensus, as soon as next week.

Comments from officials were also positive. Canadian Foreign Minister Chrystia Freeland said yesterday that “we’re making good progress on NAFTA … having said that, we’re not there yet.” And that’s seen by the markets as positive comments. She will meet with US Trade Representative Robert Lighthizer today. White House top economic advisor Larry Kudlow also said that there would be “some positive news on NAFTA … and I think the stock market is going to love that.”

Australia trade surplus narrowed to AUD 0.83b in February, above expectation of AUD 0.72b. German factory orders rose 0.3% mom in February, below expectation of 1.5% mom. Swiss CPI, Eurozone Services PMI final, PPI and retail sales will be featured in European session. But main focus will be on UK services PMI.