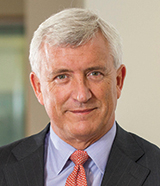 When he meets Euromoney in September, Clydesdale chief executive David Duffy is just back from a health check, and full of warnings about the risks of too much caffeine and sugar.

Given his bank’s £1.7 billion merger with Virgin Money – which Clydesdale’s shareholders approved on September 10 – Duffy might have little need for more stimulants for his blood pressure. The fast-talking Irish banker, who appears fighting fit, orders a coffee anyway.

In truth, even without Brexit, this is not the most relaxing time to be running a UK challenger bank, especially one going through a transformational event like this.

After all, earlier in September, Paul Pester – chief executive of TSB, the bank previously the closest in size to Clydesdale – stepped down after a disastrous data migration from its former parent, Lloyds Banking Group, to its new owner, Banco Sabadell.

Duffy is understandably keen to downplay fears that there could be similar problems in his own all-share acquisition (Virgin shareholders will get 38% of the combination).

The source of most complexity in integrating banks, according to Duffy, is current accounts, of which Virgin only has about 100,000. Clydesdale is already used to transferring over about 10,000 a week. Mortgages will stay on Virgin’s platform until they come up for renewal.

“This is not an IT integration,” he emphasises.

Duffy also dismisses speculation that Clydesdale, encouraged by an enthusiastic market reaction to the Virgin merger, could prey on a crisis-hit TSB – and certainly not in the next year.

A shift to internal risk-weighting models will likely leave the group far above its capital targets. But he sketches out a three-year timeframe to integrate Virgin, and prove to investors it can handle mergers like this.

“You’ve got to talk about regulatory risk, customer harm, execution capacity,” he says. “If I tried to talk to our investors about another big acquisition, regardless who it was, I don’t think it would be received well.”

Nevertheless, with only months to go until the UK could crash out of the EU, the former Allied Irish Banks chief executive is already leading Glasgow-based Clydesdale through what he says is the UK’s most important bank merger in a decade.

After the merger is complete, Duffy plans to shift all his retail and possibly later small and medium-sized enterprise customers onto the Virgin brand, for which the bank will pay a royalty fee of between £12 million and £15 million to the Virgin Group.

The real story here is how do you create new competitors to the status quo, at scale, in SMEs, and that’s exactly what we’re doing

He shows little regret for the potential demise of the combined Clydesdale and Yorkshire Bank brands which make up his group today.

“Virgin is the highest-recognition brand in the UK,” he says. “Everyone has some form of service from Virgin. We would have to spend hundreds of millions to that level of brand recognition around the country.”

Duffy sits alongside former chancellor George Osborne and others on the board of England’s Northern Powerhouse Partnership, and speaks enthusiastically about devolution for Yorkshire. But the switch to Virgin offers the chance to break out of the traditional Scottish and northern English boundaries at Clydesdale and Yorkshire Bank and “go national in a heartbeat”.

The deal also plays into his vision for the future as a wider consumer platform along the lines of China’s Ping An. The Virgin Group – already busy, he says, with a project to bring together the benefits of its diverse consumer-facing companies from airlines to health clubs – “gives us the jump start in terms of the range of products and capabilities that could be deployed in that open model”.

The merger, in his telling, will help his bank compete as more UK retail and SME banking moves online and as tech firms move onto the banks’ turf.

“The world of banking is going to radically change in terms of how services are provided, and you need to position for that,” he says.

Analysts at Berenberg and elsewhere agree with Duffy about the benefits of the greater scale: it will almost double to £83.5 billion of assets, mainly mortgages, and synergies of £120 million are expected by 2021.

Duffy adds that it will have what he calls “millennial-style digital capability” thanks to his firm’s two-year old online arm B, which has about 175,000 customers, while also bringing the experience and £7 billion loan book in SMEs at Clydesdale and Yorkshire Bank.

He sums up the strategy neatly.

“We can take the technology we built through B, take the brand of Virgin, and put the scale and complimentary products together, and that sits alongside our SME business – which Virgin doesn’t have – and we have two primary growth drivers of the business.”

Clydesdale, indeed, has already invested in the systems and processes it needs to take advantage of Royal Bank of Scotland’s programme of EU forced reduction in its share of SMEs by helping challengers take its clients.

Duffy sees Clydesdale at the forefront of similarly eligible banks, such as Metro Bank, Santander and TSB, when the scheme launches in early 2019.

The new scheme is still a way to “fill out the northwest and the Midlands,” says Duffy.

“The real story here is how do you create new competitors to the status quo, at scale, in SMEs, and that’s exactly what we’re doing. It’s a great option for us because we have 300 guys with 14 years’ average experience who are relationship managers already. We have a good product profile, but we’re limited in scale.”