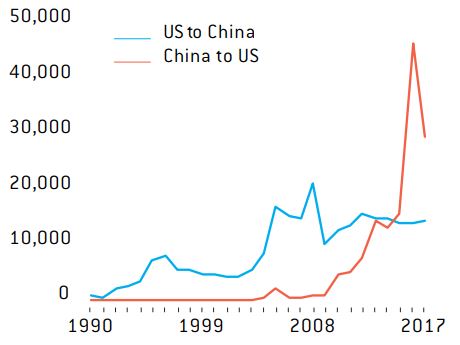 If the Trump administration wins some concessions from China in the latest trade dispute, it could be a boost to U.S.-based multinationals.

“The upside could be big because business as usual wasn’t getting the job done in opening up the market in China,” said Daniel Rosen, founder and China director of research and consulting firm Rhodium Group.

Last week, the Trump administration proposed 25 percent tariffs on $50 billion worth of roughly 1,300 Chinese imports. Beijing was quick to respond with its own list, and President Donald Trump subsequently announced he asked the U.S. Trade Representative to consider $100 billion in additional tariffs against China.

“It is really not so much about trade as about China’s rise as a technology power and U.S. efforts to contain this rise and prevent China from dominating key sectors going forward,” Paul Triolo, practice head for geotechnology at consulting firm Eurasia Group, said in an email.

“Hence the investment action will be a critical piece of this,” he said.

U.S. companies invested $14 billion in China last year, an increase of about $200,000 from 2016, bringing cumulative investment in the country to $256 billion, according to one of two studies released Tuesday by the National Committee on U.S.-China Relations and Rhodium Group.

Annual value of FDI transactions between the US and China, 1990-2017 (in USD millions)

On the other hand, the value of announcements for new Chinese transactions in the U.S. fell by nearly 90 percent in 2017, and the value of completed deals dropped by more than a third to $29 billion, one of the reports showed. The sharpness of the decline was mostly the result of record-high Chinese investment in the U.S. in 2016 and Beijing’s crackdown on capital flight. The Trump administration has also significantly increased its scrutiny on Chinese deals, citing national security issues.

Back in China, U.S. companies still face many challenges.

The latest annual survey from the American Chamber of Commerce in China found that its members “continue to feel foreign business are less welcome in China than they once were.” More than half of member companies also said they still believe intellectual property leakage and data security threats are higher in China than other parts of the world, the January report said.

“American businesses already have hundreds and hundreds of billions of dollars in investment in China on the ground, most of which is producing profits every year. They have a tremendous amount of skin in the game,” Rosen said. “They have to take an active stance in this space whether they like it or not.”

“What we need China to do at this junction is not to open up whole new sectors but just to allow U.S. companies to own their companies,” he said. “Then we could see a rapid uptick of U.S. investment in China” due to companies buying up stakes in financial services, automobiles and other industries.

Beijing has long prevented foreign majority ownership of entities in China. But authorities have announced they will gradually ease those restrictions, especially for financial institutions.

China has moved to provide a bit more clarity on the situation: President Xi Jinping discussed some broad plans to “open” the Chinese economy during a Tuesday address at the Boao Forum for Asia, an annual summit of business and government leaders.

“President Xi and I will always be friends, no matter what happens with our dispute on trade,” Trump said in a tweet Sunday. “China will take down its Trade Barriers because it is the right thing to do” and that “a deal will be made on Intellectual Property.”

As of Friday, a representative from China’s Ministry of Commerce and Trump’s chief economic advisor Larry Kudlow, a former CNBC special contributor, said the two countries were not engaged in formal discussions on trade.

“Bottom, line, this is part of a broader U.S.-China technology cold war,” Eurasia Group’s Triolo said, “and while it has trade characteristics for now, is about much more than trade, and this will make getting to some agreement that both sides can use to declare victory that much harder.”