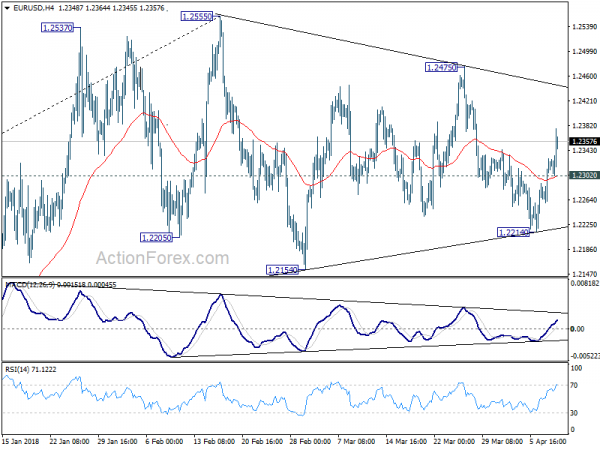 Japan Yen and, to a slightly lesser extent, Dollar suffer broad based selloff today as global markets return to risk seeking mode. Major European indices are generally higher with DAX up near 1% at the time of writing. CAC is up 0.55% and FTSE is up 0.6%. That followed 0.54% rise in Nikkei earlier today. DOW opens up nearly 400 pts and is back above 24300 handle in initial trading. Generally speaking, investors are relieved that China President Xi Jinping’s highly anticipated speech in Boao Forum for Asia didn’t ended in escalation in trade tension with the US.

In the currency markets, commodity currencies remain the strongest ones today with New Zealand and Australian Dollar leading the way higher. Euro gets some extra push entering into US session, as boosted by hawkish comments from ECB Governing Council member Ewald Nowotny. Favor is mildly on the Euro’s side based on intraday momentum. But so far, EUR/AUD and EUR/CAD are staying in tight range only.

Technically, EUR/USD’s break of 1.2344 minor resistance now eliminate the trend reversal scenario. And the actions from February 1.2555 are developing into sideway consolidation pattern only. More upside is now in favor back to 1.2475 resistance and above.

But it should be noted the pledge to open up the markets have been delivered by various Chinese leaders for two decades but actual delivery has been relatively small. And whatever Xi said, they are still words for the moment. And more importantly, “China still have the option of opening the markets to all but those who don’t commit to multilateral frameworks.” The messages Xi delivered were to the world rather than the US.

Separately, Bloomberg reported citing a “person familiar with the situation” that China offered to lower its trade surplus to US by USD 50b. But the US raised the stakes by further requesting China to stop subsidizing business related to its “Made in China 2025” initiative, which China rejected. But in our view, this piece of news is more rumor than anything, obtained from unknown source. This news is dismissable.

In IMF’s latest world FX reserve report, central bank’s/reserve managers’ demand for US dollar remained intact in 4Q17. This has not only reinforced the greenback’s dominant status as the world’s reserve currency, but also signaled other currencies still failed to gain widespread confidence due to the economic and/ or financial developments of the corresponding economies. More in USD Dominance Stays Despite Twin Deficits and Threats to Sell Treasury.

ECB Governing Council member Ewald Nowotny spoke in the European Money and Finance Forum (SUERF) today. Regarding monetary policy, it reiterated that “it is time for a gradual normalization” as inflation pressure will eventually materialize. And he added that the asset purchase program could end this year. But he also emphasized that “this normalization requires a delicate balancing of measures as well as careful sequencing in time.” He noted that ECB is now at an “important turning point”. While the Eurozone has very strong economic expansion, it’s an unequal one.

He stressed that the ECB framework is well equipped to cope with the evolving inflation debate. But still, exit is complex due to the large amount of stimulus in place. Nowotny also repeated all other central bankers have said over time. That is, tightening too soon would stifle recovery. Falling behind the curve would risk creating bubble in assets.

On the topic of trade war, Nowotny warned of the “negative effects for all involved”. And, “the direct effects might be on the exchange rate side but this is difficult to see or to forecast because today we have so many linkages, we have long production chains… It might have negative effects on financial stability, but effects on monetary policy are not very clear.”

BoE known hawk Ian McCafferty urged his fellow policymakers not to “dally” when it comes to tightening policy modestly. He is seeing no labor market slack in the economy. In addition, there are modest upside risks to wage growth forecasts presented in the February Quarterly Inflation Report. He added that “It’s not wages suddenly bursting away, but it gives you a modest upside risk.” Also, McCafferty is concerned on whether import price inflation would fade as the central bank forecasted. On the other hand, he acknowledged that Brexit uncertainty will be a permanent feature of the economic landscape of the UK. While it may hamper long term investments, the impact on short term projects or exports would be small.

Australia NAB business confidence dropped another 2 pts to 7 in March, down from 9. Business conditions dropped 6 pts from February’s record high at 20 to 14. That’s 3 points lower than January’s 17. Nonetheless, the condition reading remains well above historical average at 5.5. NAB pointed out that the US announcement of tariffs on USD 50b of Chinese imports could have affected sentiments.

NAB saw that “purchase cost growth has been moving higher since late 2016” and that could be “providing a tentative sign of inflationary pressure.” On the other hand, “labour cost (wage bill) growth moderated after rising the previous month”, which could have offset some of the inflationary pressure.

EUR/USD’s strong rally today and break of 1.2344 resistance firstly indicates the fall from 1.2475 has completed at 1.2214 already. Secondly, it invalidated the bearish case of larger trend reversal. Instead, price actions from 1.2555 high could merely be developing into a sideway consolidation pattern. Intraday bias is back on the upside for 1.2475/2555 resistance zone. We’d be cautious on strong resistance from there to bring another fall to extend sideway trading. On the downside, below 1.2302 minor support will turn bias back to the downside for 1.2214 instead.