LTRO: Why the ECB should make every day Christmas 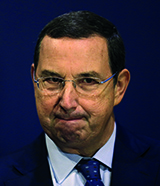 Recent discussion on whether the European Central Bank should extend its long-term refinancing operations (LTRO) in 2019 has revolved largely around which banks should be able to use it.

Last time, LTRO targeted banks contributing to the economy. This time, some of its proponents are arguing it should be restricted to banks that have acted on non-performing loans.

This would be a good bone to throw to the inevitable northern European detractors of extending the programme. After all, it is not Christmas every day. Why should the ECB prop up banks that do nothing to help themselves?

In reality, it would be difficult to push banks that have not done enough towards failure. The banking sector is obviously not behind the push by Italy’s Five Star Movement or Greece’s Syriza for greater freedom from austerity measures.

In any case, most banks that use LTRO will be able to find some evidence that they have acted on non-performing loans, even if Italian banks – by far the biggest users of the targeted LTRO (TLTRO) programme – could and perhaps should have done much more to bolster their balance sheets in better times. This is particularly true of the mid-tier lenders.

Banco BPM, Italy’s biggest mid-tier, is an example. It has just negotiated an agreement to sell the Profamily consumer credit unit that it inherited from Banca Popolare di Milano, to France’s Crédit Agricole: a bank with wider Italian ambitions. In addition, it has the option to reduce its 39% stake in Agos Ducato (the consumer venture Banco Popolare previously established with Crédit Agricole) to 10% via a possible IPO.

The €310 million Profamily sale will bolster Banco BPM’s common equity tier-1 ratio by 80 basis points to 12%, although only until it offloads its Project Ace bad-loan portfolio for a face value of as much as €7.8 billion. American-backed consortia led by hedge funds CRC and Elliott, and private equity company Fortress, have placed offers.

Bad-debt sales like this have gradually become much more common in Italy and elsewhere in southern Europe since the 2014 switch of the supervisory regime to the ECB, about the same time as the first TLTRO programme. Bank of Italy, in particular, gave banks under its supervision a great deal of latitude on NPLs.

Project Ace, and other sales like it, are evidence of an acceptance of a change in supervisory norms around NPLs. It also shows continued demand among NPL investors, if partly because these sales are still only dripping out.

What they do not show, however, is an acceptance among the banks of the greater prioritisation by markets of stronger capital ratios: itself a consequence of changing regulatory demands and less supervisory patience.

Giuseppe Castagna, now Banco BPM’s chief executive, rightly argues to Euromoney, along with other mid-tier banks, that the ECB would discourage mergers by demanding Banco Popolare raise €1 billion of equity to greenlight its 2016 merger with BPM.

At the same time, Single Supervisory Mechanism chair Ignazio Angeloni was also right to argue to Euromoney this year that the extra buffer has served Castagna well. Indeed, the new Italian government’s attitude to the budget deficit has still brought worry about Banco BPM’s capital level, despite the €1 billion raised in 2016. Its NPL ratio will still be double the European average, even after Ace, according to Berenberg.

Perhaps Banco BPM should have gone way beyond the immediate supervisory demands for capital and raised more equity when the markets were more accommodating than they are now. This is what UniCredit did two years ago, and it gained credibility as a result. Such leadership is harder in the mid-tier, but Credito Valtellinese’s rights issue this March was similarly aggressive.

The reality is that most Italian mid-tier banks, including Banco BPM, are set-up for life in a more benign market environment, and under a pro-European government that keeps Italian-German sovereign spreads around 150bp. But that changed in May, as the ascendance of the Five Star-Northern League coalition saw spreads double.

Now, just as bankers in Athens are awaiting Greece’s 2019 general election, another TLTRO will only help Italian banks hibernate until a more market-friendly government emerges in Rome.