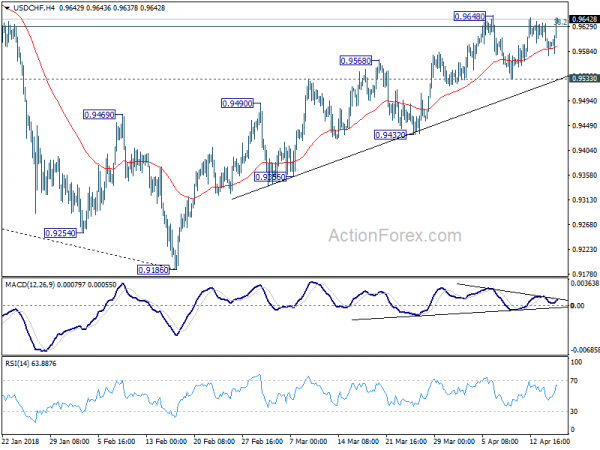 Sterling and Euro strengthened earlier today but both reversed earlier gains after disappointing economic data. On the other hand, Dollar is trying to make a come back as buying accelerates in early US session. It’s more a coincidence than a response. But the greenback picks up momentum after US Treasury Secretary Steven Mnuchin repeated President Donald Trump’s tweet regarding Russia and China devaluation. The reversal in fortune in European majors today now put USD/CHF into the spotlight. 0.9648 in USD/CHF will be a focus for the rest of the day.

Mnuchin talked to CNBC today and he mentioned Trump’s tweet regarding Russia and China currency devaluation. Mnuchin said that was a “warning shot at China and Russia about devaluation. China has devalued their currency in the past.” Mnuchin added that “they’ve used a lot of their reserves to actually support the currency. The president wants to make sure they don’t change their plans, and he’s watching it.”

Regarding the economy, Mnuchin said “we’re now at a point where we’re comfortably within our 3 percent or higher sustained economic growth”. He added that “we literally have met with hundreds of executives, small companies, big companies, and thousands of workers. We’re beginning to see the impact of the tax cuts, specifically people investing large amounts of money back into the United States.” Also, “The difference between 2.2 and 3 percent will pay for the tax cuts.”

Regarding rejoining TPP, Mnuchin just said that Trump would opt to join only when there are more favorable terms to the US. And Mnuchin is “cautiously optimistic.

UK unemployment rate dropped to 4.2% in February, down from 4.3% and beat expectation of 4.3%. That’s also the lowest level since 1975. Employment also rose to a record high between December and February, adding 55k jobs. However, average weekly earnings grew only 2.8% 3moy, unchanged from January’s reading. That’s a disappointing to markets who expected 3.0% 3moy growth. Sterling traders were clearly disappointed with the data as the pound pared back some gains after the release.

However, UK Chancellor of Exchequer Philip Hammond sounded upbeat on employment and productivity outlook. He point the parliament to ” record levels of employment in the economy, record-high employment figures”. Hammond expected these factors to “drive the productivity performance of the UK economy.”

German ZEW economic sentiment dropped to 87.9 in April, down from prior 90.7 and consensus of 88.0. ZEW expectation gauge dropped to -8.2, down from 5.1, below consensus of -1. ZEW noted in the statement that “the reasons for this downturn in expectations can mainly be found in the international trade conflict with the United States and the current situation in the Syrian war. ZEW also warned that ” significant decline in production, exports and retail sales in Germany in the first quarter of 2018 is also having a negative effect on the future economic development.” Eurozone ZEW economic sentiment dropped 1.9, down from 13.4, below expectation of 7.3. The deterioration were similar to those dragged the Germany readings.

Released from China, Q1 GDP grew 6.8% yoy, same as prior quarter and met expectation. However, March data were mixed. Retail sales rose 10.1% yoy in March, up from prior 9.7% yoy and beat expectation of 9.7% yoy. Industrial production, on the other hand, rose 6.0% yoy, slowed from prior 7.2% yoy and missed expectation of 6.9% yoy. Fixed assets investment also slowed to 7.5% yoy, down from 7.9% yoy and missed expectation of 7.7% yoy. Seasonal factor – Lunar New Year in the second half of February, was the key reason for the mixed picture in March. More evidence in April and May are need to determine whether Chinese economic growth would slow this year.

In a move to increase support for small and micro businesses, the People’s Bank of China lowered Reserve Requirement Ratio for most commercial and foreign banks by 1%, effective April 26. On the same day, those banks included could use the funds released by RRR reduction to repay borrowing from the PBoC, on the basis of “borrowed first, repaid first”.

PBoC went further to explain that China’s small and micro businesses still face difficulties in financing and expensive financing. Lowering the RRR for some banks could release funding to support these businesses. The move could also increase long terming funding and lower costs of the funds. CNY 400B in funds will be released and these funds are required to be used mainly for loans to small and micro businesses

RBA minutes: Growth to exceed potential, but still not strong case for near term hike

Minutes of April RBA meeting appeared to be rather balance. RBA sounded upbeat and said over 2018, GDP growth was expected to “exceed potential. CPI inflation was expected to “increase gradually” to a little above 2% target. Also, leading indicators continued to point to “above-average growth in employment” in the period ahead.

However, RBA also warned that “the possibility of an escalation in trade restrictions represented a risk to the global outlook that needed to be monitored closely”. Additionally, “the high level of debt in China and the significant share of financial market activity in unregulated sectors continued to pose important risks to the outlook for the Chinese economy”.

Regarding exchange range, RBA reiterated that “an appreciation of the Australian dollar would be expected to result in a slower pick-up in economic activity and inflation than forecast.” On monetary policy, RBA also reiterated that the next move “would be up, rather than down”. But still, “there was not a strong case for a near-term adjustment in monetary policy”.

Dollar’s strong rebound today now put 0.9648 resistance in focus. Decisive break there and sustained trading above 0.9626 key fibonacci level will add to the case of larger reversal. In that case, rise from 0.9186 will target next fibonacci level at 0.9900. On the downside, again, break of 0.9533 minor support should indicate rejection by 0.9626 key fibonacci resistance. Intraday bias would then be turned to the downside side for 0.9432 support. Further break there will turn near term outlook bearish for retesting 0.9186 low.