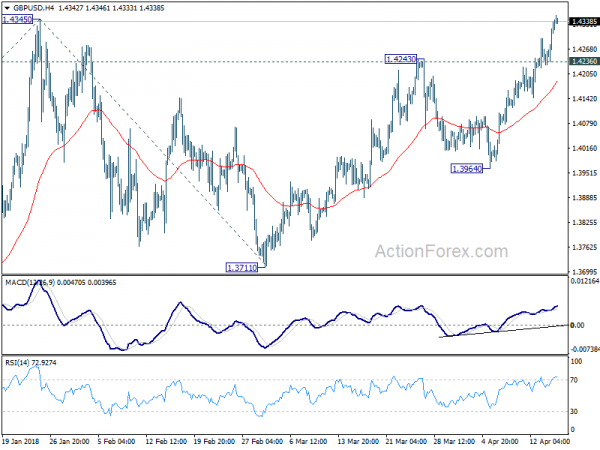 Sterling retreats mildly in Asian session today, against Dollar, Euro and Yen. But it remains the strongest one for the week. The breach of 1.4345 resistance in GBP/USD overnight signals medium term up trend resumption. But the rally slowed a little bit above there. For now, GBP/JPY is limited below last week’s high at 133.83 while EUR/GBP is held by equivalent level at 0.8627. Traders are awaiting UK employment data today and CPI tomorrow, which would be important to determine BoE’s rate path this year.

Elsewhere in the currency markets, Australian Dollar is trading broadly lower today after RBA minutes reiterated its patient stance on tightening. New Zealand and Canadian Dollar are also soft. Dollar was under some selling pressure yesterday but it’s so far holding on to near term support levels. Most notably, EUR/USD is staying below 1.2396 and USD/CAD is holding above 1.2544. These two level, though, look vulnerable.

UK job data and wage growth to be watched closely

UK job data will be a key focus in the upcoming session. Unemployment rate is expected to be unchanged at 4.3% in February. And more importantly, average weekly earnings is expected to accelerate to 3.0% 3moy. Wage growth, together with tomorrow’s CPI release, will be crucial to determine the rate path of BoE this year.

According to a Bloomberg survey just released today, three quarters of analyst now expect a May BoE hike, up from 54% last month. After that, the majority expected BoE to stand pat through the rest of 2018 until another hike in Feb 2019.

For now, with good progress seen in Brexit negotiations, the uncertainties are lying more on economic data. There are still a couple of possible scenarios. If data worsen, BoE might choose to hold fire until November. Or if inflation stays robust with acceleration in wage growth, BoE might add another hike in November, making it two this year.

RBA minutes: Growth to exceed potential, but still not strong case for near term hike

Minutes of April RBA meeting appeared to be rather balance. RBA sounded upbeat and said over 2018, GDP growth was expected to “exceed potential. CPI inflation was expected to “increase gradually” to a little above 2% target. Also, leading indicators continued to point to “above-average growth in employment” in the period ahead.

However, RBA also warned that “the possibility of an escalation in trade restrictions represented a risk to the global outlook that needed to be monitored closely”. Additionally, “the high level of debt in China and the significant share of financial market activity in unregulated sectors continued to pose important risks to the outlook for the Chinese economy”.

Regarding exchange range, RBA reiterated that “an appreciation of the Australian dollar would be expected to result in a slower pick-up in economic activity and inflation than forecast.” On monetary policy, RBA also reiterated that the next move “would be up, rather than down”. But still, “there was not a strong case for a near-term adjustment in monetary policy”.

Separately, US Treasury data showed showed that China remained the largest foreign creditor to the US, holding USD 1.18T in US bonds, bills and notes in February. Debt holding by China has indeed by USD 8.5B for the month, the largest rise in six months. But it should be noted that the data was for the period even before the 232 steel tariffs of the US, not to mention the Section 301 tariffs against China. The impact of trade tensions on Chinese interest in US debts remains to be seen. Meanwhile, Japan came as second largest foreign holder of US debts, dropped slightly from USD 1.07T to USD 1.06T.

German ZEW economic sentiment will be another feature in European session. Canada will release international securities transactions later in the day. US will release housing starts and building permits, industrial production and capacity utilization.