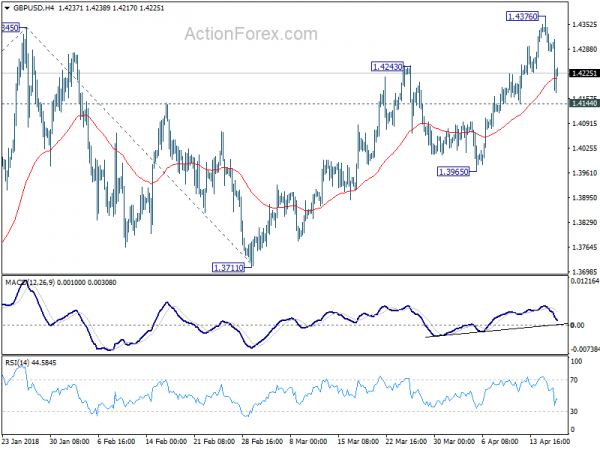 Sterling is the biggest loser today after CPI missed market expectations. Most importantly, it’s the steep trend of slow down in inflation, from 3% in January to 2.5% in March that raised doubts on a BoE May hike. The Pound stabilized a bit after initial selloff. For the moment, it’s sill holding above 1.4144 minor support against Dollar, 151.15 minor support against Yen. EUR/GBP also stays below 0.8739 minor resistance. Sterling remains technically in near term up move, but the picture is not looking too well. Elsewhere in the currency markets, Canadian Dollar is trading mixed as BoC rate decision is awaited. Euro is trading as the strongest one for today and for the week. Swiss Franc turned mixed but remains the weakest one for the day. Dollar is mildly higher against most currencies except Euro and Aussie.

Quick update: CAD dips after BoC stands pat and signals it’s not ready for another hike yet. More in quick comments.

UK CPI miss put BoE May hike back on the table

Chancellor of Exchequer Philip Hammond welcomed the data as he tweeted. “Inflation fell to 2.5% in March and is expected to keep falling. With wages rising that will mean more money in people’s pockets.” However, the data is clearly not welcomed by Sterling bulls.

It should be noted that BoE’s February projections were based on market pricing that Bank Rate will rise to 0.7% by 2018 year end. And by 2019 Q1, CPI inflation would drop to 2.3%. Inflation is now already in a clear down trend, diving from 3% in January to 2.5% in March. With Bank Rate staying unchanged at 0.50%. There is much room for BoE to wait through at least another quarter to see how things play out.

November rate decision is now closer to certain, “no”. And May hike is back on the table.

And he added that “such a negative loop would tighten financial conditions, and deteriorate the growth outlook in the euro zone. ” Also, “our monetary policy stance would then have to be adapted, depending on the ultimate impact on inflation prospects.”

Also released Eurozone CPI was finalized at 1.4% yoy in May, core CPI at 1.0% yoy, unrevised.

While Japanese Prime Minister Shinzo Abe is visiting Trump in the US, his domestic political turmoil continues to spiral out of control. A top finance bureaucrat, Administrative Vice Finance Minister Junichi Fukuda resigned today after alleged sexual harassment. Abe and his cabinet’s ratings have plunged recently on scandals. And the news certainly doesn’t give him any help.

It doesn’t look like Abe’s trip to the US would achieve anything fruitful, from both political and economics point of views. As the leader and top US ally in East Asia, Japan seems to be by passed by Trump regarding Korean Peninsula issue. And that already triggered some doubt on Abe’s diplomatic credibility. And, just as they’re meeting in Florida, Trump tweeted that “Mike Pompeo met with Kim Jong Un in North Korea last week.” If further confirms that Japan has no involvement in the issue.

And regarding TPP, which Japan has been leading after Trump’s withdrawal last year, Trump also poured cold water on rejoining. He tweeted “while Japan and South Korea would like us to go back into TPP, I don’t like the deal for the United States.

It’s the seventh meeting between Abe and Trump since the latter’s election victory. And it look like quantity has nothing to do with quality. It’s time for Abe and his LDP to rethink their stance and position in global politics. But in any case, it looks like former PM Junichiro  Koizumi is correct. “The situation is getting dangerous.”