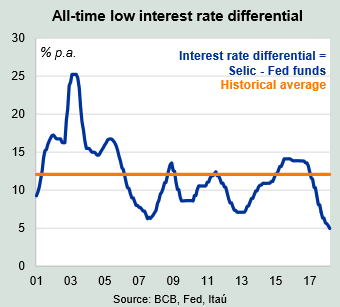 The Brazilian currency has been underperforming its peer group of emerging-market currencies, falling by 5% against the dollar in the past month; the Russian rouble has fallen 7% in the same period due to the impact of US sanctions.

However, there is a divergence of opinion about what is driving this weakness.

Ilya Gofshteyn, LatAm FX strategist at Standard Chartered, told Euromoney on his recent visit to the region that international investors tend to believe the uncertainty about who will emerge as Brazil’s next president later this year is putting downward pressure on the BRL.

“I think about 90% of international investors read this current weakness as politics coming to the fore – that’s why they are worried and that has led to the bid for BRL coming down,” says Gofshteyn.

There is some evidence for this theory: despite former president Lula’s incarceration, he continues to lead local opinion polls – by a large margin – from the second-place Jair Bolsonaro, a right-wing populist.

The failure of a centrist, pro-reform candidate to gain any momentum could be worrying investors, as failure to enact pensions and other spending reforms early in the next administration would lead to huge budgetary pressures and a precipitous drop in international confidence that Brazil would meet its fiscal challenge – thereby potentially sparking a debt and currency crisis.

This narrative is the thrust of analysts such as Barclays’ Juan Prada, who says: “The reform effort has stopped and political uncertainty about the October elections remains. The centre of the political spectrum still needs to consolidate around a presidential candidate, and any fragmentation could increase the likelihood that an outsider will be elected.

“The need for fiscal consolidation and reforms remain, and the outcome of the elections will determine the political will to pursue them. As such we believe BRL could underperform in Q3 18 as elections near.”

However, Itaú points to the weakening carry trade: Brazil’s Selic has fallen sharply in recent years – and is still expected to go lower – in response to very low local inflation.

“Over the past year, the narrowing interest differential between the US and Brazil – caused by repeated cuts in the Selic and rate hikes by the Federal Reserve – undermined the attractiveness of carry-trade operations justifying a weaker exchange rate,” says a recent Itaú report into the BRL.

In fact, the interest-rate differential between Brazil’s and the US’s interest rate is a record low – and that will go lower still as the Fed’s path is one of raising rates, whereas most economists expect the Brazilian central bank to cut the Selic again to 6.25% at its next meeting in May.

Gofshteyn believes it is a combination of both local and international views.

“Locals don’t think it’s politics at all; rather it is a function of the diminished carry that the BRL offers,” he says.

“The BRL was last year’s trade and now people are much more interested in equity. As that rotation happens, and because the carry has come down and also made it much cheaper to hedge the BRL, locals are hedging their BRL exposure and foreigners are not coming in to take up that bid because they are worried about the politics. So it’s a combination of the two.”

However, Gofshteyn thinks there are other issues at play that are being missed by proponents of these two main narratives for BRL softness.

“Another factor is the appreciation of the Mexican peso,” he says. “If you are looking at fast money flows, then the money has been coming back to Mexico because of [progress on the North American Free Trade Agreement negotiations].

“That has led to a desire to buy the peso, but if you are a macro investor you might not want to be outright short the dollar as we are in a more tenuous global risk environment. So these investors hedge their peso positions and the other liquid LatAm currency is the BRL.”

Gofshteyn says the previous historical relationship between the Mexican peso and the Brazilian real has flipped: in the past, the trade was to take the BRL’s high carry and hedge with the peso.

“Now you can collect the carry in the Mexican peso and hedge with the BRL, and even if you don’t make money on the spot you are still collecting the carry,” he says.

There are other factors, too. The Brazilian economy seems to be slowing in 2018, to the surprise of many economists who expected the slight recovery of 2017 (GDP growth of 1.0%) to strengthen this year.

However, recent data seem to put the risk of 2018’s growth forecasts to the downside. They hint at a general deceleration, with industrial production failing to maintain the strong performance at the end of 2017 – month-on-month growth of 2.9% in December – with a 2.2% month-on-month decline in January and a 0.2% positive result in February.

Retail sales have remained stagnant since November and, in total, economic activity fell back 0.6% in January and only nudged up 0.1% in February.