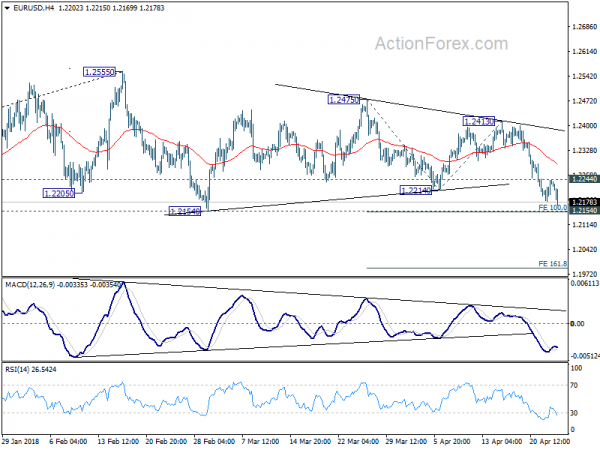 Dollar jumps again today as 10 year yield is having another attempt at 3% handle today. The greenback is trading above yesterday’s high against all major currencies except Sterling. And for now, Yen is actually not the weakest one. Instead, commodity currencies and Swiss Franc are the worst performers. EUR/CHF had another attempt on 1.2 handle earlier today, but thanks to Euro’s weakness, this historical level is still intact. Developments in yield will be the main driver in the markets with a near empty economic calendar in the US session.

German Economic Ministry revised growth forecast down to 2.3% in 2018

The German Economy Ministry lowered growth forecast for this year today. For 2018, GDP is now projected to grow 2.3%, downgraded from January forecast of 2.4%. For 2019, growth is projected to be at 2.1%.

Economy Minister Peter Altmaier said that the German economy s in a “robust state”, “remains buoyant and the upturn is continuing.” Also, while recent economic data have been disappointing, Altmaier said they “”are in no way pointing to a downturn.” He added that “any growth in the region of 2 percent or above is exceptionally good growth, if you compare it with the history of the last 10-15 years in Germany.”

Articles by ECB Executive Board member Yves Mersch and Governing Council member Vitas Vasiliauskas were published Wednesday by Eurofi today. While Mersch’s article was submitted back on March 21 and Vasiliauskas on March 15, they’re worth a quick read.

Mersch’s article was on the topic of “Monetary policy in the euro area: solid expansion with timid price pressure”. He noted that “confidence has recently risen and convergence is being confirmed – partly because the temporary decline in the inflation rate has been weaker than our internal calculations had predicted.” And still, emphasized that patience and persistence with respect to our monetary policy is required.”

Vasiliauskas’ article was on the topic of “The time is approaching to seriously consider a smooth transition from the APP”. He noted that “we have witnessed the strengthening of broad-based growth and steadily declining unemployment, providing conditions for inflation convergence to our objective.” And, “this has increased my confidence that it is time to transition from the asset purchase program”. However, Vasiliauskas also emphasized that “the closure of the program should not be abrupt.”

ECB meeting is not totally a non-event

Talking about ECB, there is little chance of any change in monetary policy nor language tomorrow. Despite expectations that the ECB would only announce adjustments on QE and interest rate in June the earliest, the upcoming meeting is not a non-event. Since the March meeting, Eurozone’s economic data have surprised to the downside. It would be of great interest to see the policymakers’ interpretation of the situation. All in all, we expect the members to view the first quarter slowdown as driven by temporary factors, e. g.: weather, which do not affect the monetary stance. More in ECB Preview: Caution over Recent Slowdown Won’t Affect QE Schedule

And some suggested readings on ECB:

EUR/USD’s fall resumes after brief consolidation and intraday bias is turned to the downside for 1.2154 key support. Decisive break there should confirm the bearish case of medium term reversal. And EUR/USD should then target 161.8% projection of 1.2475 to 1.2214 from 1.2413 at 1.1991. On the upside, though, break of 1.2244 minor resistance will indicate short term bottoming. And even though we’d still expect deeper decline in that case, lengthier consolidation would be seen first.