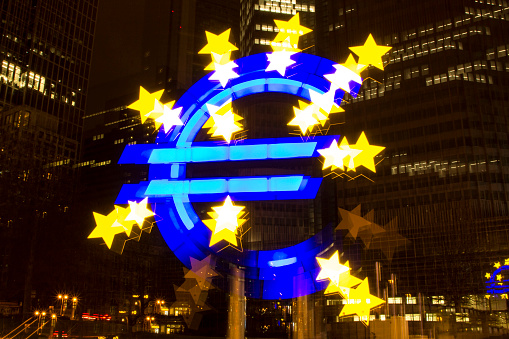 In line with our expectations, ECB largely judged the recent slowdown in economic data as driven by temporary factors and moderation after periods of strong growth. The members maintained the view that risks to growth were “broadly balanced” and remained confident that inflation would converge towards the +2% target. Neither did the accompanying statement nor President Draghi reveal hints about the future path after QE’s end in September. The more reasonable timing of such announcement is still June, or July. At the April meeting, ECB decided to leave the main refi rate, the marginal lending rate and the deposit rate unchanged at 0%, 0.25% and -0.40% respectively. The central bank also kept the net asset purchases at a monthly pace of 30B euro until the end of September 2018, or beyond.

In the Introductory Statement, the members acknowledged “some moderation in the pace of growth since the start of the year”. They attributed the situation to “a pull-back from the high pace of growth observed at the end of last year” as well as “temporary factors” including cold weather, strikes, and Easter. They continued to expect growth to “remain solid and broad-based”. On inflation, the members admitted that it has “yet to show more convincing signs of a sustained upward trend“. Core inflation remained “subdued” but should “rise gradually over the medium term, supported by our monetary policy measures“. As such “an ample degree of monetary stimulus remains necessary for underlying inflation pressures to continue to build up“.

At the press conference, Draghi noted that “the interesting thing is that we didn’t discuss monetary policy per se”. It appears that the focus of the discussion was on recent economic developments, of which the conclusion is unchanged outlook. Likely in either June or July, the ECB would announce that plan after QE ends in September. We believe a three-month tapering from September to December is prudent to keep some monetary accommodation in place for convergence of inflation to the target.