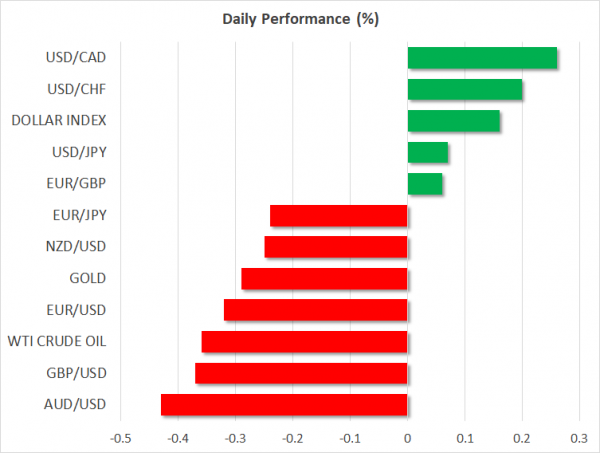 FOREX: Dollar/yen traded at 110.75 (+0.08%) on Monday, giving back most of the gains it posted earlier in the session when it briefly touched a one-month high of 111.05, with the yen failing to capitalize substantially on the broader risk-off mood seen in other asset classes, like equities. Meanwhile, the dollar index was up by 0.15% at 94.77. Euro/dollar was down by 0.35%, hovering just above 1.1640 as concerns of a political crisis in Germany cast a shadow. The nation’s Interior Minister Seehofer offered to resign amid continued disagreements with Chancellor Merkel’s immigration policy; the two will continue talks today in hope of finding common ground. Pound/dollar was also on the back foot, lower by 0.39%, with the British currency struggling even despite reports the UK government has produced a new option for handling customs – a thorny issue in the Brexit negotiations. In the antipodeans, aussie/dollar (-0.49%) and kiwi/dollar (-0.35%) moved lower, trading close to the respective 18-month and 24-month lows they posted last week. Dollar/loonie was up by 0.33% at 1.3170 amid a tumble in oil prices, recovering some of the losses it posted on Friday.

STOCKS: European equities were a sea of red on Monday at 1000 GMT, as the political turbulence in Germany and the risk of further escalation in trade tensions sapped risk appetite. The EU Commission reportedly warned the US that introducing tariffs on imported cars – which President Trump has threatened – could elicit counter-levies from the US’s major trading partners, resulting in up to $294bn of US goods being subject to tariffs. The benchmark European STOXX 600 was down by 0.88%, while the blue-chip STOXX 50 fell 0.92%. The German DAX 30 (-0.55%), the French CAC 40 (-1.05%), the British FTSE 100 (-0.95%), and the Spanish IBEX 35 (-1.12%) all felt the heat as well. The negative sentiment looks set to roll over into Wall Street, with futures tracking major US indices like the S&P 500 and Dow Jones pointing to a much lower open today.

COMMODITIES: Oil prices recovered some of their earlier losses on Monday, though were still in the red for the day. WTI was down by 0.37% at $73.79, while Brent dropped by 0.68% to $78.64. Both benchmarks opened with notable gaps to the downside following tweets from President Trump over the weekend that Saudi Arabia’s King Salman had agreed to his nation raising its oil production. Nonetheless, the fact that the dip in prices was quickly bought – even despite a broader risk-off atmosphere and a stronger dollar – suggests that the bullish sentiment surrounding oil markets likely remains intact for now. In precious metals, gold was down by nearly 0.3% at $1248 per troy ounce, staying within breathing distance of its lows for the year achieved last week, at $1245.

Day Ahead: US ISM Manufacturing PMI eyed ahead of RBA decision

In the remainder of the day, the calendar will be light in terms of economic data, with US ISM manufacturing PMI being the only major pending release. Later, during the Asian trading session on Tuesday, attention will turn to the Reserve Bank of Australia (RBA) rate decision.

The Institute for Supply Management (ISM) manufacturing PMI reading is due out of the US at 1400 GMT. The index is expected to inch down by 0.6 points to 58.1 in June, from 58.7 in the preceding month. Any value above 50 indicates that the sector is growing. A higher-than-expected print could push the US dollar higher on expectations for a more aggressive rate-hike path by the Fed. The opposite holds true as well.

Other releases that might draw some attention out of the US are Markit’s final reading on June manufacturing PMI (1345 GMT), and May’s construction spending figures (1400 GMT).

As for central bank meetings, the RBA will announce its rate decision during the Asian trading session on Tuesday, at 0430 GMT. Policymakers are widely anticipated to keep interest rates unchanged and as such, attention will turn to the phrasing of the accompanying statement. While Australian economic data have been decent lately – with a stronger-than-anticipated GDP print for Q1 – the trade standoff between the US and China has also escalated quite substantially, amplifying the downside risks for export-reliant economies like Australia. Should the RBA take a page out of the RBNZ’s book and highlight those risks, the aussie could extend its recent losses. On the contrary, if the RBA refrains from appearing too concerned, or if it places more emphasis on encouraging developments like the recent decline in the exchange rate, then the aussie could rebound.