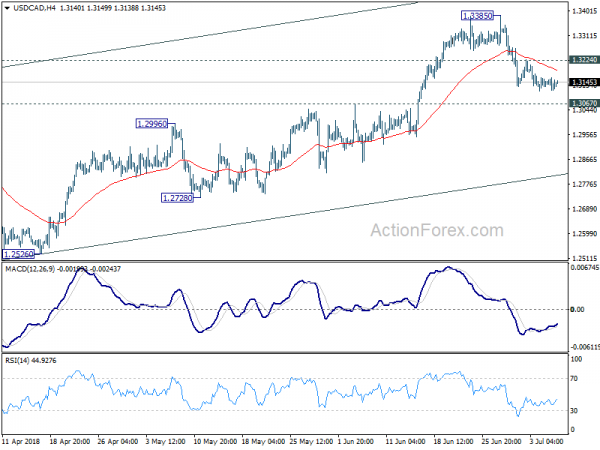 Asian markets are trading broadly lower today as the US is set to start the Section 301 tariffs on Chinese imports, and the latter’s retaliation is also ready. This would mark an important turning point as the risks of trade war is finally realized. China’s Shanghai SSE breached 2700 key psychological level but is quickly back up. With 2016 low at 2638 in proximity, the Chinese government could step in with intervention of some sorts below 2700. At the time of writing, Hong Kong HSI is down -0.51% while Singapore Strait Times is down -2.10%. Nikkei, however, bucks the trend and is trading up 0.67% as automakers lead the rise. Overnight, DOW closed up 0.75% as hope that the Trump will back down from auto tariffs on EU.

In the currency markets, Dollar trades mildly higher ahead of non-farm payroll report today, but remains mixed for the week. Nonetheless, New Zealand Dollar, in corrective recovery, is trading strongest. Japanese Yen is the third strongest today so far on risk version. Australian Dollar and Canadian Dollar are generally soft but loss is limited.

US Section 301 tariffs on USD 34B of Chinese imports are going to take effect at 12:01 Eastern time Friday, that is, just hours away. Ahead of that, Trump raised his threat again and warned of tariffs on up to USD 500B of Chinese goods. He told reports that “you have another 16 (billion dollars) in two weeks, and then, as you know, we have $200 billion in abeyance and then after the $200 billion, we have $300 billion in abeyance. Ok? So we have 50 plus 200 plus almost 300.”

China Foreign Minister Wang Yi, also State Councilor, slammed trade protectionism as “short-sighted” behavior that could harm all sides. And he reiterated China’s position that unilateral acts would go against the rules of the WTO and pose damages to the multilateral global trading system. China said earlier that its retaliation will start once the US tariffs kick in.

FOMC Minutes: Slope of yield curve to be monitored

The minutes of the June FOMC meeting provided little inspirations to the markets overnight. It’s noted that job gains had been strong, unemployment rate hade decline, growth of household spending had picked up, business fixed investment continued to grow strongly, headline and core inflation have moved close to 2%, long term-inflation expectations were little changed. “Members viewed the recent data as consistent with a strong economy that was evolving about as they had expected.”

Flattening of the yield curve was a topic discussed during the meeting as that “might signal about economic activity going forward”. A numbers of factors were brought forward, including “reduction in investors’ estimates of the longer-run neutral real interest rate; lower longer-term inflation expectations; or a lower level of term premiums in recent years relative to historical experience reflecting, in part, central bank asset purchases.” And that could ” temper the reliability of the slope of the yield curve as an indicator of future economic activity.” A number of the meeting participants said that “it would be important to continue to monitor the slope of the yield curve.”

The minutes also noted that escalating trade tensions have already started hurting investments. The minutes pointed out that “many district contacts expressed concern about the possible adverse effects of tariffs and other proposed trade restrictions, both domestically and abroad, on future investment activity.” And, “contacts in some districts indicated that plans for capital spending had been scaled back or postponed as a result of uncertainty over trade policy.” And, most policymakers noted that “uncertainty and risks associated with trade policy had intensified and were concerned that such uncertainty and risks eventually could have negative effects”.

Markets are expecting 190k growth in non-farm payrolls in June, down from May’s 223k. Unemployment rate is expected to be unchanged at 3.8%. Average hourly earnings are expected to have another month of 0.3% mom growth.

Overall, other employment indicators pointed persistently healthy job markets in the US, even though momentum might have slowed a little bit. ADP private employment came in slightly weaker than expected at 177k versus expectation of 180k. Employment component of ISM manufacturing dropped -0.3 to 56.0. Employment component of ISM non-manufacturing dropped -0.5 to 53.6. Initial jobless claims averaged 221.25k in June, staying a ultra-low level historically. Conference board consumer confidence dropped from 128.8 to 126.4 in June but stayed high.

Barring any large surprise that deviate drastically from expectation, reactions to NFP should be temporary. Fed is on course for two more rate hikes this year. And, a month or two of data are not going to alter that path.

UK Prime Minister Theresa May is set to have a “sleepover” meeting with her cabinet in the Chequers to straighten out all issues on post Brexit relationship with EU. Supposedly, another white paper will be published on July 9 as the government finally agrees on a unified position. The pressing issue is how the UK would likely to replace the membership of the EU’s customs union which still provides “frictionless trade”. The border of Irelands is another sticky issue that hasn’t been solved.

Ahead of the meeting, May said “we want a deal that allows us to deliver the benefits of Brexit – taking control of our borders, laws and money and by signing ambitious new trade deals with countries like the US, Australia and New Zealand.” And, “this is about agreeing an approach that delivers decisively on the verdict of the British people – an approach that is in the best interests of the UK and the EU, and crucially, one that commands the support of the public and parliament.”

Japan household spending dropped -3.9% yoy in May, labor cash earnings rose 2.1% yoy. Germany will release industrial production in European session while Swiss will release foreign currency reserves. US non-farm payroll is a major focus today while trade balance will also be featured. Canada job data will be another main focus and trade balance and Ivey PMI will also be released.

No change in USD/CAD’s outlook. Fall from 1.3385 is seen as a correction and could extend lower. But downside should be contained by 1.3067 resistance turned support to bring rebound. Above 1.3224 minor resistance will turn bias to the upside for retesting 1.3385 first. However, firm break of 1.3067 will bring deeper decline to channel support (now at 1.2809).