How Have Major Currencies Fared So Far in 2018, and What Lies ahead? 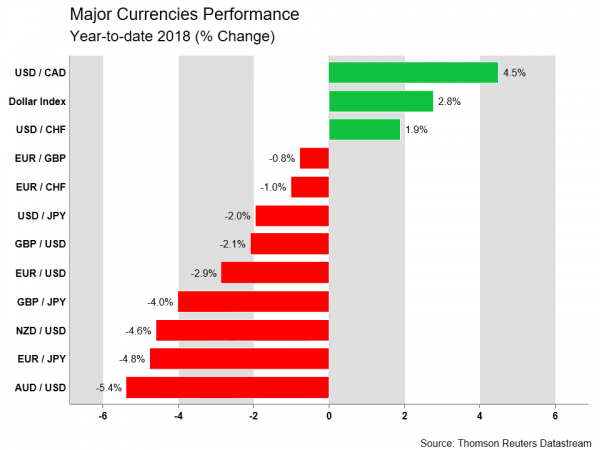 Following the completion of the second quarter of the year, the dollar is standing higher against most of its major peers, drawing support from a more hawkish Fed and a US economy firing on all cylinders. Below, we outline how some of the most widely-traded currency pairs have performed thus far in 2018, and what may lie ahead in an environment characterized by trade tensions, political uncertainties, and monetary policy divergences.

Euro/dollar – Down, but not out

The world’s most traded currency pair had one turbulent ride so far in 2018. After rising to a three-year high of 1.2555 in the first two months of the year on speculation the ECB would move towards normalizing policy, the pair dropped violently in Q2. It fell as low as 1.1506 on the back of a slowing European economy, an increasingly uncertain European political scene, and a strengthening dollar. Year-to-date, euro/dollar is lower by 2.9%.

Looking ahead, considering that European political worries have moderated for now, speculative net EUR positions have fallen back near neutral levels, and Eurozone-US yield differentials may not widen much further with an ECB gearing up to hike rates, it’s difficult to envisage significant losses in euro/dollar from current levels. Except, of course, in case of some shock – like an “all-out” trade war – that weighs on the euro more than the dollar.

Technically, the pair seems to be locked in a sideways range between 1.1506 and 1.1850, and a break in either side could determine the next directional wave. Note, that a move above 1.1850 would also mark the completion of a triple bottom pattern on the daily chart, increasing the odds for further advances from a technical standpoint.

Dollar/yen – Only “Trump risk” left for the yen, but it might be enough

The yen remains one of two major currencies that are still trading in positive territory versus the dollar year-to-date; the other is the Norwegian krone. Specifically, USDJPY is down by 2.0% so far in 2018. Despite its outperformance, major yen-positive drivers at the start of the year have run out of steam in Q2. One such driver was the BoJ normalization narrative. It currently appears that market participants are no longer “buying it”, with abating and stubbornly low inflationary pressures contributing to this “cause”.

As inflation was cooling in Q2 (see chart on top) the dollar/yen pair was heading higher (see chart below). Meanwhile, the Federal Reserve continues to normalize policy, having recently – during the June meeting – upgraded its (median) hike projections to signal four 25bps interest rate increases in total during 2018, from three before. Further monetary policy divergence between the US and Japan is supportive of higher yield differentials – in the US’ favor of course – and thus promotes a firmer USDJPY moving forward in 2018. Having said that, uncertainties relating to the Trump administration’s policy decisions, perhaps most importantly on global trade, linger on the horizon with the Japanese currency standing to gain on the back of safe-haven flows.

Overall, monetary policy divergence is supportive of a rising dollar/yen as the year unfolds. However, “Trump risk” looms large and could act to the detriment of such a projection. Technically, the pair has been progressively entering a higher range of trading from late March onwards. Starting June, USDJPY has been ranging between roughly 109.20 and 111.20. An upside break may indicate a move to a zone that has 113.50 as its upper bound, reflecting a return to a territory where trading activity took place in late 2017.

Euro/sterling – Quiet as a mouse

Admittedly, this cross has not been the most exciting this year. It has traded in a narrow range between 0.8620 and 0.8970 as both the euro and sterling have underperformed, with price action largely dictated by which currency was bleeding less. Year-to-date, euro/sterling is down 0.8%.

In the near-term, the pair may depend more on politics than economics and specifically, on how the Brexit negotiations play out. Economic data, as well as ECB & BoE policies are always important (see sterling/dollar below), but relative monetary policy seems unlikely to deliver as big of a shock as a change in the Brexit landscape.

Negotiations are currently stuck in a deadlock over customs and the Irish border. For the talks to move on, a solution is needed before the October EU summit. Reports suggest Theresa May’s government will unveil a new plan soon that could end this impasse, and the pound is likely to move depending on how “workable” and “realistic” it’s perceived to be. A practical proposal that alleviates uncertainty and increases the odds for a “smooth Brexit” may boost sterling, and vice-versa.

Cable’s fortunes in 2018 resemble a roller coaster ride. The pair started the year around 1.3500, surged to a two-year high of 1.4376 by mid-April, only to collapse viciously in the ensuing weeks, touching 1.3048 by late-June amid a cocktail of an appreciating dollar and a dovish repricing of the BoE’s rate trajectory.

As outlined above, Brexit may be the overarching theme for this pair – over the summer at least – ahead of the October EU summit. Beyond politics, and perhaps in the more immediate term, both Cable and euro/sterling could also get their cue from whether the BoE will raise interest rates in August, or not. Markets currently assign a 59% probability for a hike (UK OIS), and should it approach 100% as we draw closer to the meeting, that would be a sterling-positive factor. We stress, though, that any major Brexit developments (or lack thereof) could well eclipse central bank deliberations.

The Canadian dollar has been caught between two narratives this year, and the downbeat one is “winning” so far, judging by the fact dollar/loonie is up 4.5% year-to-date. On the one hand, uncertainty around the trade outlook and NAFTA is casting a shadow on the economy, keeping the BoC cautious in raising rates. On the other, oil prices have rallied spectacularly, while economic data have remained largely robust, likely limiting any greater losses in the loonie.

NAFTA negotiations may remain the primary driver for the Canadian currency, though, a swift resolution seems unlikely following comments from President Trump that he wants to wait until after the US midterm elections in November to sign a deal.

That said, considering how much the loonie has underperformed, one could argue most NAFTA concerns are already priced into the battered currency. This implies the risks surrounding the loonie moving forward may be asymmetrical and tilted to the upside. Whereas continued trade uncertainty may keep the currency around current low levels, any signs of an agreement could trigger an outsized relief rally. The key risk to this view, would be a US withdrawal from NAFTA ahead of the midterms – though this appears unlikely.

The Fed has delivered its seventh quarter-percentage-point rate increase during its latest meeting in June, while, as previously discussed, it tilted hawkish by steepening its rate hike outlook for 2018. Contrast this with the Reserve Banks of Australia and New Zealand: the two central banks yet again maintained rates at historic lows upon completion of their latest meetings, while they showed no urgency to raise rates anytime soon.

Australian inflation is below the RBA’s target – though it should be said that it remains within reach of it –, while domestic demand is weak, with high household debt levels posing risks to the outlook. Regarding New Zealand, its latest GDP figures showed a slowdown in quarterly growth during Q1 relative to Q4 2017 – specifically, the rate of expansion stood at 0.5% q/q, its weakest since Q4 2016. Moreover, headline inflation fell to 1.1% y/y in Q1, barely remaining within the lower bound of the bank’s medium-term target range of 1-3% on an annual basis. Again, contrasting with the US: the investor community seems to agree that the world’s largest economy is gaining positive momentum, with US releases feeding into GDP forecasting models putting growth at the 4-handle on an annualized basis during Q2, its highest since 2014.

In the meantime, both Australia and New Zealand heavily rely on commodity exports. With the outlook on global trade being increasingly clouded by the confrontation between China and the US, the risks seem tilted to the downside for the two currencies which have already suffered significant losses as tensions were progressively rising. This especially holds true for Australia due to its close economic ties with China – to paraphrase the adage, “if China sneezes, Australia will catch a cold”.

Taking everything together, it seems that a lower AUDUSD and NZDUSD could emerge as the year unfolds. However, it should also be kept in mind that despite the various “hiccups”, global growth still remains on track to accelerate the most since the global financial crisis according to some estimates. This, combined with a possible easing of trade tensions – as talk in recent months may have been mere posturing– could boost sentiment, thereby allowing the aussie and the kiwi to advance versus the greenback as Australia and New Zealand stand to gain on the back of strong export growth, in this scenario.

As evidenced from the chart above, the medium-term picture for the two pairs is bearish; the two have been in a downtrend for the most part in 2018, recording lower highs and lower lows. In particular, aussie/dollar and kiwi/dollar are trading lower by 5.4% and 4.6% respectively so far in 2018, having recently recorded a one-and-a-half-year low and a two-year low correspondingly.