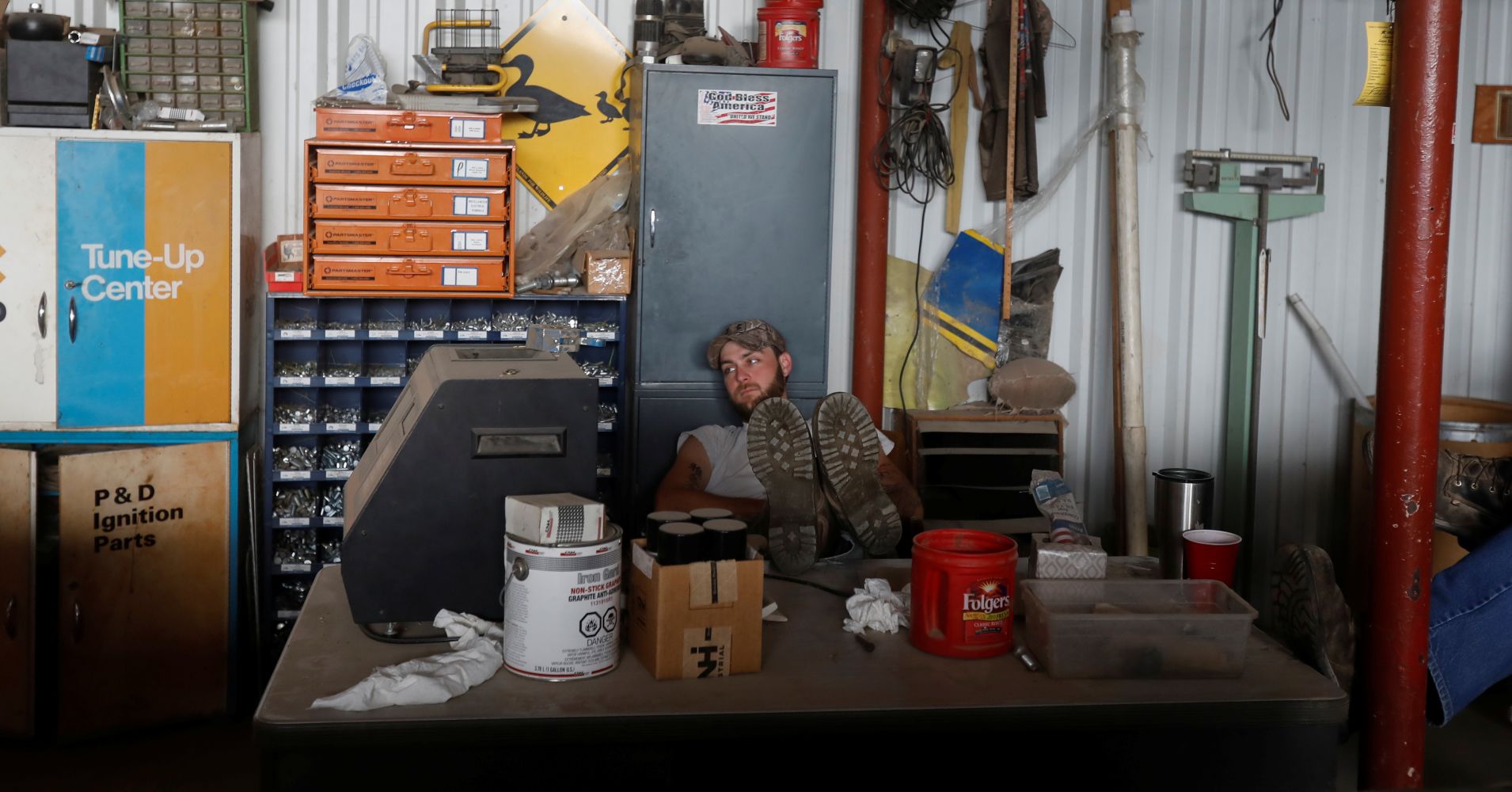 People don’t talk about trade tariffs in this stretch of the Mississippi River basin, where grains and metals have paid the bills for generations.

They skirt the subject at church fundraisers and sidestep it at Jerry’s Café and Quick Stop, where farmers and aluminum workers gossip about everything else.

The Republican president’s tariffs on imported metals were instrumental in reviving an aluminum plant that most locals had written off for dead. But in the fields surrounding the plant and across the county, farmers anxious over trade retaliations against U.S. crop exports are delaying equipment purchases, renting their land to hunters and pre-selling crops before harvest — locking in today’s prices for fear they will fall.

“People don’t want to talk about trade,” said Justin Rone, a farmer with deep family roots in soybeans and cotton. “It’s safer to talk about how best to grow your crop, keep your head down and pray.”

Farmers’ fears were realized Friday as the United States and China levied dueling tariffs on $34 billion worth of each country’s goods. Many U.S. agricultural exports, including soybeans, now face 25 percent duties.

Neil Priggel knows both sides of the trade war’s impact on his community. He worked at the Noranda Aluminum smelter before it went belly-up in 2016 and also runs his family’s 4,000-acre farm along with two brothers.

As Trump announced steel and aluminum tariffs in March, Priggel stared at the TV news and thought: We’re saved. We’ll get our jobs back.

His very next thought: We’ve got to protect the farm.

Priggel and other farmers here, where about 70 percent of voters supported Trump, know their crops are obvious targets for countries striking back against U.S. tariffs. They also know the tax on metal imports helped lure new owners to reopen the plant that has long financed their neighbors’ mortgages, truck payments and groceries.

Is it true the plant is coming back?

Did you get my application?

At her dusty office desk, its drawers still full of old invoices, she checks her voicemail – full, again. Many callers are former plant workers; sometimes they break into tears when she calls back.

The plant’s new owners plan to hire 465 people, for now.

More than double that number have applied.

Getting the smelter back was a long shot, locals say, just like getting a high-paying factory to this rural corner of Missouri in the first place. When it was built in 1969, they named its site for the patron saint of lost causes: the St. Jude Industrial Park.

Workers rode out years of aluminum price drops, labor strikes, recessions and fights with electricity suppliers. The company would cut shifts, lay off workers, then hire them back, workers say.

But the plant closed in early 2016 after a series of crippling blows: global aluminum prices plunged; a New York private equity fund heaped on $1 billion in debt in a leveraged buyout; an explosion disabled the plant’s cast house; a power-outage shut two production lines.

About 1,000 people had to go find jobs, often at much lower pay, said Mark Baker, a farmer and presiding commissioner for New Madrid County.

But most stayed, often turning to the region’s other dominant for work.

“The only people hiring were the farmers,” said Dalton Bezell, 31, who worked for Noranda.

By late summer, Noranda’s staff had shrunk to nine people, making a fraction of their previous salaries. Their job: Secure the plant and try to figure out a way to revive it.

Steve Rusche, now chief operating officer of Magnitude 7 Metals, was among the nine.

He watched as prospective buyers toured the plant – not to restart it, but to chop it up and sell it for scrap. One was different: Magnitude 7 Metals, founded by former Glencore aluminum trader Matt Lucke, who wanted to operate the plant if it could work financially, Rusche said.

The Republican-controlled state legislature helped by passing a controversial law making it easier for manufacturers to hire non-unionized workers, a bill plant representatives supported. Some of Noranda’s remaining crew of nine helped to cut electricity deals and lock in raw material prices for the new company.

“The pivot point was when things started to come out of Washington about the metal tariffs,” Rusche said.

Last June, Magnitude 7 Metals Chief Executive Officer Bob Prusak testified before the Commerce Department at a public hearing about a department investigation into aluminum imports. Tariffs, he told them, were “nothing short of critical to get us up and running,” according to a video of the hearing.

More investors joined as Trump threatened and later imposed the metal tariffs. The plant ramped up hiring and opened its first production line on June 14.

Hope is fading on the farms of New Madrid county.

Local grain farmers sell most of their harvests to river terminals for overseas markets because there is scant local demand. The traders ship crops down the Mississippi River to Gulf Coast seaports for international distribution.

Friday’s retaliation by China hits a slew of U.S.-made products, including soybeans, the most valuable U.S. agricultural export. Rising tensions with Mexico and Canada could also hit U.S. farmers as the countries renegotiate the North American Free Trade Agreement.

Farmers were already hurting before the trade fight, with net farm incomes slashed in recent years as a global grains glut undermined prices.

About half of U.S. soybeans were exported last year, according to USDA data. More than one-quarter of the crop, worth about $12.3 billion, went to China. Missouri exported $2 billion worth of agricultural goods, federal data shows.

A couple of Rone’s employees took the farmer aside recently. They told him they were grateful he gave them work after they lost their jobs at the smelter. But with the plant reopening, they were applying for their old jobs.

Priggel and his brothers already sold more than half of the corn, soybeans and cotton they planted this spring, a move to lock in profits in case trade retaliations undercut prices. In June, U.S. soybean futures contracts nearly hit a 10-year low.

Missouri cotton marketer Barry Bean said one of his farmers was so freaked out about the tariff threat that he sold nearly 80 percent of the crop before he had planted anything this spring. He has no crop insurance. He keeps calling Bean, trying to sell even more cotton still growing in his fields.

“Stop,” Bean keeps telling him. “If something happens — you get a weather event — you are going to be in serious trouble.”

Third-generation soybean farmer Bobby Aycock has cut his operating expenses, avoided buying new equipment and rented out some of his farmland.

He’s got a plan in case the tariffs drive down grain prices to a point that threatens his farm’s survival.

“I’ll cash out, get out of farming and go get a job at Magnitude 7,” Aycock said. “I have to protect what I’ve worked for — for 37 years — and what I’ve put away, so my kids will have it a little better than I had it growing up.”