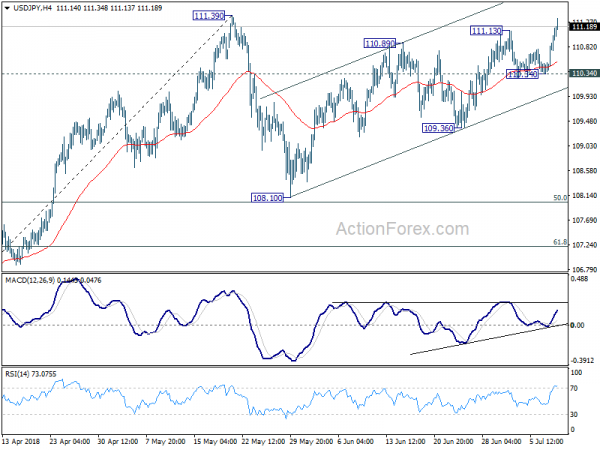 Dollar strengthens broadly today, partly with help from Euro’s post data weakness. Much weaker than expected German ZEW economic sentiment is giving some pressure to the common currency. On the other hand, USD/JPY surges through 111.13 temporary top and is now taking on 111.39 key near term resistance. Yen’s weakness can be largely attributed to return of risk appetite

It seems that for now, investors have left global trade war behind. China’s Shanghai SSE closed up 0.44% earlier today while Nikkei closed up 0.66%. Major European indices are also trading in blue with DAC and CAC up more than 60%. US futures point to higher open with main focus on whether NASDAQ could break historical high at 7806.6. In other markets, Gold’s rebound lost momentum as Dollar regains strength and is back below 1250. WTI crude oil stays firm at around 74.

Sterling’s selloff halted as the resignations of David Davis and Boris Johnson didn’t trigger didn’t trigger any avalanche effect. Prime Minister Theresa May’s position appeared to be save. Indeed, GBP/JPY even breached 147.60 temporary top to recent this week’s rebound. May’s Cabinet, with new members, discussed the controversial white paper on Brexit. The plan is set to be publish on Thursday and we’ll, by then, get some concrete responses from the EU.

Technically, 111.39 resistance in USD/JPY is the immediate focus now as break will confirm resumption of whole rally from March low at 104.62. EUR/USD’s steep selloff today raises the chance that corrective rise from 1.1507 has completed at 1.1790. Focus now is on 1.1679 minor support to confirm this. While GBP/USD stabilized, it’s still look vulnerable and 1.3189 minor support will be watched. USD/CAD showed resilience in holding on to 1.3067 support as expected. 1.3159 will be watched to confirm completion of the correction from 1.3385.

ZEW President Professor Achim Wambach said in the release that “the current survey period has been marked by great political uncertainty. In particular, fears over an escalation of the international trade war with the United States have dampened the economic outlook. The positive news regarding industrial production, incoming orders and the labour market have been greatly overshadowed by the anticipated negative effects on foreign trade”.

Eurozone Economic Sentiment dropped -6.1pts to -18.7, well below expectation of -5.1. Current Situation index dropped -3.7pts to 36.2. ZEW also noted that as a result, the economic outlook for the Eurozone over the coming six months has worsened considerably. In accordance with the weaker economic outlook for both Germany and the Eurozone, inflation expectations also saw a noticeable drop compared to the previous month.

UK GDP grew 0.2% in three months to May. Modest, driven by services

UK GDP rose grew 0.3% mom in May and 0.2% in the three months to May. Growth were drive by Services with 0.34% growth in the rolling quarter. Production dropped -0.08% while construction dropped -0.10%. Head of National Accounts Rob Kent-Smith said in the release that “services, in particular, grew robustly in May with retailers enjoying a double boost from the warm weather and the royal wedding. Construction also saw a return to growth after a weak couple of months.

He added that overall, the survey is consistent with NAB’s outlook for 2018. Despite easing a little recently, leading indicators remain positive suggesting continued growth in output and employment. Higher profitability and trading conditions as well as high rates of capacity utilisation also remain conducive to higher business investment. This growth will be necessary to reduce the amount of spare capacity in the economy, which should in time see a rise in prices and wages growth, which we consider key to the path of monetary policy over the next few years”

USD/JPY surges to as high as 111.34 so far today. Break of 111.13 suggests resumption of rise from 108.10. Intraday bias is now on the upside with focus on 111.39 key resistance. Decisive break there will resume whole rally from 104.62 low. That will also add credence to the case of medium term reversal and target 114.73 resistance for confirmation. On the downside, however, break of 110.34 will indicate near term reversal. And, the consolidation pattern from 111.39 would then start the third leg for 108.10 again before completion.