Dollar Marches On With NATO Showdown and US-China Trade War 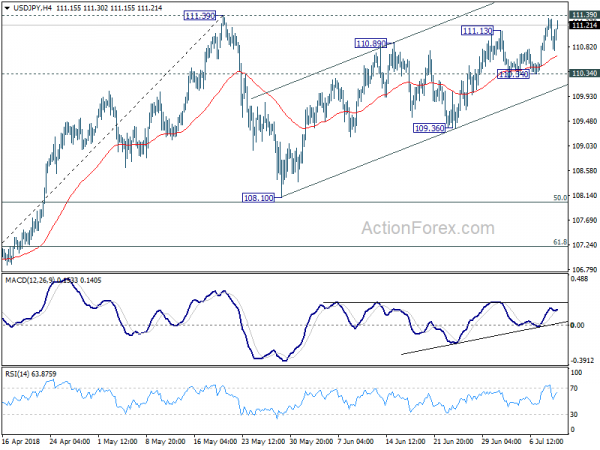 Global stocks tumble as US escalated the trade war with China again today, moving on to the process to impose tariffs on additional USD 200B of Chinese goods. On the other hand, Trump is fighting allies of the US in NATO summit in Brussels. At the time of writing, Major European indices are all in red with FTSE down -1.1%, DAX down -1.3% and CAC down -1.1%. While there is no clear sign of rebound yet, at least, the selloff doesn’t accelerate after initial hours. Indeed, we’ve also pointed out that the losses in Asian markets were also limited, with China SSE down only -1.76%. US futures point to lower open but we’ll see how it goes.

Quick update: Canadian Dollar surges as BoC raised interest rate to 1.50% as widely expected. BoC downplayed the impact of US steel tariffs and Canada retaliation in the statement and maintains tightening bias. More here with full statement. Now, focus in on 1.3067 support in USD/CAD.

China’s Foreign Ministry spokesperson Hua Chunying said in a regular briefing that “US behavior is a typical trade bullying”. And, China will make the “necessary counter-measures and resolutely safeguard its legitimate rights and interests”. She emphasized that “this is a fight between unilateralism and multilateralism, protectionism and free trade, power and rules.” And the Ministry of Commence will handle the details of retaliation measures. Hua also reiterated that “We don’t want a trade war, but we are not afraid to fight.”

Earlier today, Chinese Ministry of Commerce said in a statement that it’s “shocked” and find it “totally unacceptable” as the US accelerate the trade war escalation. It warned that the “irrational” action is “hurting China, hurting the world, and hurting itself. Also, China pledged to make “necessary counter measures” and call on the international community to defend against “trade hegemonism”. It will also file a complaint to the WTO again US unilateralist action.

Late yesterday, Trump administration announced the plan to impose tariffs on additional USD 200B of Chinese imports, as follow up action to Section 301 investigation. The list of targeted products is released, including consumer items such as clothing, television components and refrigerators as well as other technology products. There will be 10% tariffs on the products, which could come into effect after public consultations end on August 30. After imposition, the Section 301 tariffs will cover as much as half of Chinese imports to the US.

The US Trade Representative Robert Lighthizer said in a statement that “for over a year, the Trump administration has patiently urged China to stop its unfair practices, open its market, and engage in true market competition.” And, “China has not changed its behavior — behavior that puts the future of the U.S. economy at risk. Rather than address our legitimate concerns, China has begun to retaliate against U.S. products. There is no justification for such action.”

Trump continues to attack NATO allies in the Brussels summit

Just as the two day summit of NATO starts in Brussels today, Trump is already launching provocations to the allies of the US again. He called Germany a “captive of Russia” as the latter is “getting so much of their oil and gas from Russia.” Trump also lied that 60-70% of Germany’s energy use is from Russia. But in fact it’s only about 20%.

German Chancellor Angela Merkel told report about her experience in during the Eastern Germany that was controlled by the Soviet Union. And she added that “Germany does a lot for NATO”, it’s the “second largest provider of troops, the largest part of our military capacity is offered to NATO”. And point to the fact that until today, Germany has a “strong engagement toward Afghanistan” and in that “we also defend the interests of the United States.”

There were also exchanges between Trump and European Council President Donald Tusk that we’re not going to repeat here.

NATO Secretary General Jens Stoltenberg also said in a statement prior to the summit that “defence spending and burden-sharing will be high on the agenda”. And, “we expect 8 Allies to spend at least 2 percent of GDP on defence this year, compared to just 3 Allies in 2014.” In additional, he estimated that European Allies and Canada will add an “extra 266 billion US dollar” to defence between now and 2024.

Stoltenberg also mentioned later that “there are disagreements on trade. This is serious. My task is to try to minimize the negative impact on NATO.” And, “so far is hasn’t impacted on NATO that much, I cannot guarantee that that will not be the case in the future. The transatlantic bond is not one, there are many ties, some of them have been weakened.”

The high profile Brexit white paper that triggered resignation of two UK ministers is set to be published tomorrow. While the optimists suggest that the latest political turmoil in the UK has increased the chance of a “soft” Brexit which is positive for UK’s economic outlook and the British pound, we see ongoing uncertainty in the negotiations with the EU.

Pro-Brexit Dominic Raab has replaced the David Davis as Brexit Secretary, while Pro-Bremain Jeremy Hunt would assume the role of Foreign Secretary, replacing Boris Johnson. The new appointments exemplified the continuing tug of war between the Brexit and Bremain camps. While British pound has stabilized after volatile trading in the aftermath of the resignations, we expect risk to skew to the downside.

USD/JPY rebounds strongly after dipping to 110.76 but stays below 111.39 resistance. Intraday bias remains neutral for the moment. Further rise is in factor as long as 110.34 minor support holds. On the upside, firm break of 111.39 will resume whole rally from 104.62 low. That will also add credence to the case of medium term reversal and target 114.73 resistance for confirmation. On the downside, however, break of 110.34 will indicate near term reversal. And, the consolidation pattern from 111.39 would then start the third leg for 108.10 again before completion.