A new golden age for banking? 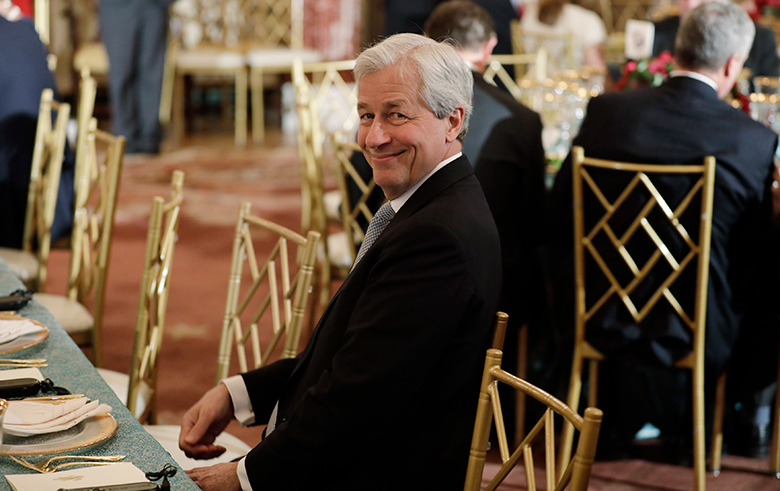 On a conference call arranged by Bernstein at the beginning of July, JPMorgan’s chairman and chief executive Jamie Dimon was on his usual bombastic form, but one statement stood out.

In case anyone doubted his own genius, he prefaced his reply with: “You guys thought I was kidding when, years ago, I said you’re going to have a golden age of banking.”

In terms of the quantum of earnings, he’s absolutely right. Free from post-crisis fines and settlements, the absolute amount of profit being generated by the world’s biggest banks – and, it has to be pointed out, not just among the US-headquartered ones – is at least at pre-crisis levels.

It’s the return on equity – usually struggling to get into double-digits, when more than a decade ago they were often 20%-plus, thanks to capital levels up to a third smaller – that’s been the problem.

Is that now starting to change?

Well, JPMorgan itself has updated its return on tangible common equity target recently to a very-healthy looking 17%. On the call, Dimon talked about his bank having been able to return 13% to 15% in common equity through the cycle (albeit a cycle that’s been strongly bullish.). And he added: “Remember, if you have 15% in tangible equity…. that’s an unbelievable thing if we can accomplish that for our shareholders… better than most funds… better than most private equity.”

Does this mean that the global banking industry has now, finally, adapted to the new world of finance since the financial crisis? Is this potentially a new golden era for banking, one of good, sustainable returns for shareholders?

The signs are encouraging. Let’s look at the winners of Euromoney’s two biggest Awards for Excellence this year.

Few banks suffered as much through the crisis as Bank of America. The irony is that this is a bank – as one senior executive admits to Euromoney through gritted teeth – that bought its way into the sub-prime crisis through its acquisition of Countrywide and Merrill Lynch.

Today, Bank of America is a business with a clear identity, one set down steadfastly by chairman and chief executive Brian Moynihan and repeated with remarkable consistency by its other senior executives.

The mission is one of responsible growth, avoiding the mistakes of the past. BofA managers are loath to say it’s a low-risk model, but it’s certainly not a high-risk one.

Shareholders are starting to like it, and not just because BofA is returning so much to its investors in the form of dividends and buybacks. Its market capitalization has almost doubled in the last three years, making it the third biggest bank in the world by that measure.

It is a sign of changing times in the banking industry, after years and years of capital raises, for the head of a bank to say to Euromoney as Moynihan does: “We will never have to issue another share of stock in this company’s history.”

Then there’s Citi, Euromoney’s winner of the award for the world’s best investment bank this year. This is a bank that, until very recently, was considered too big and unwieldy to manage. Its management never countenanced retreating from a global footprint that no other bank had – or, today, could even dream to match. And many of its clients are rather relieved Citi did not pull back – it is the go-to firm for global investors and corporates today.

Again, the mantra at Citi is one of sustainable growth. As Jamie Forese, president of Citigroup and head of its wholesale bank, the Institutional Clients Group, tells Euromoney: “Slow, steady and sustainable is the key to success in this business. I’d rather grow at 2.5% every year for four years than grow by 10% in year one but then flatline for the next three.”

You’ll hear the same story or similar at Morgan Stanley, at HSBC, at Santander, at BNP Paribas or at UBS. These are institutions that have learned the lessons of the past and are finding a way to thrive in a more difficult environment.

Not every bank will share this rosy view. As the CFO of one of Europe’s biggest banks points out almost wistfully to Euromoney: “It still feels like we’re wading through the devastated battlefield of 10 years of regulation following the financial crisis.”

Big challenges remain for all banks – how to better harness technology, how they might cope with a downturn in global markets that must surely come, how to continue to avoid the mistakes of the past as a new generation of leaders takes over.

This might not yet prove to be a golden age for banking. But it is certainly shaping up to be a brighter one.