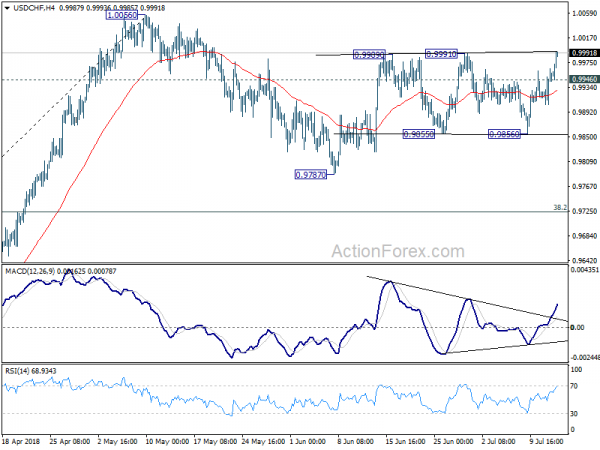 Return of risk appetite is probably the main theme in the markets without a main theme today. There are quite a number of “high-level” events today, ECB meeting accounts, US CPI release, UK’s Brexit white paper, and the NATO showdown. Plus, the continuous development of US-China trade war in the background. But none of these is really market moving. The clearer development is that Yen stays broadly weak today as selloff extends. Swiss Franc is catching up and is trading as the second strongest. There are signs of upside breakout in USD/CHF and EUR/CHF. On the other hand, commodity currencies are generally higher with Australian Dollar leading the way up. Canadian Dollar recovers as WTI crude oil seems to have defended 70 handle and is back above 71. US Dollar, while staying the strongest one for the week, struggles to buying sustainable buying momentum.

In other markets, US futures point to higher open as DOW might try to reverse yesterday’s loss. Major European indices are generally higher. At the time of writing, DAX is up 0.43%, CAC up 0.78% and FTSE up 0.78%. Earlier today, Nikkei closed up 1.17%, Hong Kong HSI rose 0.60%, Singapore Strait Times rose 0.12%. More importantly, China Shanghai SSE rose 2.16% to close at 2837.66, back above 2800 handle. The development indicates certain calmness in the markets despite this week’s trade war escalation. And it affirmed the view of strong support between 2016 low at 2638.3 and 2700 psychological level. More upside in Chinese stocks will help stabilizing Asian markets.

Technically, USD/CHF breaches 0.9991 resistance today and looks set to resume recent rebound from 0.9787 for 1.0056 key near term resistance. This will be a main focus in US session. GBP/USD breached 1.3189 minor support earlier today but quickly recovered, this level will also catch some attentions.

Regarding the “summer of 2019”, ECB provided some clarity in the June meeting accounts released today. The accounts recapped that “policy rates would be kept at their present levels at least through the summer of 2019 and in any case for as long as necessary to ensure that the evolution of inflation remained aligned with a sustained adjustment path”.

The accounts noted that the wordings were seen to “strike a good balance between providing sufficiently precise guidance and maintaining adequate flexibility”. And, “the proposed state-contingent component of the forward guidance on policy rates was widely seen as underlining the gradual and data-dependent approach to policy normalisation.”

Also, “explicitly linking a first policy rate rise to inflation evolving along a sustained adjustment path was seen as consistent with the ECB’s forward-looking and medium-term-oriented monetary policy strategy and would underscore the credibility of the Governing Council’s commitment to its price stability objective.”

The key take away is, ECB wants to reserve some “flexibility” which is understandable.

Valdis Dombrovskis, Vice-President for the Euro and Social Dialogue, also in charge of Financial Stability, Financial Services and Capital Markets Union, said: “European economic activity remains solid with 2.1% GDP growth forecast for the euro area and the EU28 this year. Nevertheless, the downward revision of GDP growth since May shows that an unfavourable external environment, such as growing trade tensions with the US, can dampen confidence and take a toll on economic expansion. The growing external risks are yet another reminder of the need to strengthen the resilience of our individual economies and the euro area as a whole.”

Pierre Moscovici, Commissioner for Economic and Financial Affairs, Taxation and Customs, said: “Growth in Europe is set to remain resilient, as monetary policies stay accommodative and unemployment continues to fall. The slight downward revision compared to the spring reflects the impact on confidence of trade tensions and policy uncertainty, as well as rising energy prices. Our forecast is for a continued expansion in 2018 and 2019, although a further escalation of protectionist measures is a clear downside risk. Trade wars produce no winners, only casualties.”

UK finally published the long awaited Brexit White Paper titled “The future relationship between the United Kingdom and the European Union“. Brexit Minister Dominic Raab said in the forward of the document that “leaving the European Union involves challenge and opportunity. We need to rise to the challenge and grasp the opportunities.” And, “this is the right approach – for both the UK and for the EU. The White Paper sets out in detail how it would work.”

EU chief Brexit negotiator Michel Barnier tweeted that “We will now analyze the #Brexit White Paper (with) Member States & EP, in light of #EUCO guidelines,” he tweeted, referring to the European Parliament and his own negotiating team from the European Council . He added that “EU offer = ambitious FTA + effective cooperation on wide range of issues, including a strong security partnership.” And he looked forward to negotiations with the UK next week.

Trump holds an unscheduled press conference after an “emergency” NATO meeting. He reiterate that the US commitment to NATO “remains very strong”. And he’s “extremely happy” that all members have agreed to raise their defense spending. Trump said in the conference that “everyone has agreed to substantially up their commitment. They’re going to up it at levels that they never thought of before.” And, “I told people that I’d be very unhappy if they didn’t up their financial commitments substantially” “I let them know that I was extremely unhappy with what was happening, and they have now substantially upped their commitment.” Answering CNN’s question on whether his insulted Germany by saying they’re a “captive” of Russia, Trump said it’s a very effective way to deal,” “it’s a very effective way of negotiating.”

In a policy news release, the South Korean Ministry of Trade, Industry and Energy warned that the US-China trade dispute is likely to be “prolonged and proliferated”. And it urged private sector to seek analysis from the Korea Institute for Industrial Economics and Industry (KIEP) on the effects on imports and exports of each industry.

The Ministry also warned that “China’s home appliances, computers and telecommunication equipment are included in the additional tariffs, which suggests that exports of intermediate goods to China will decrease .” Meanwhile, the government would prepare a scenario for developing trade disputes with the US and prepare counter measures accordingly.

USD/CHF rises to as high as 0.9994 so far today. The breach of 0.9991 resistance, with solid upside momentum as seen in 4 hour MACD, suggests an upside breakout. Intraday bias is cautiously on the upside for 1.0056 high next. Decisive break there will resume whole rally from 0.9186 for 1.0342 key resistance level. On the downside, however, below 0.9946 will dampen the bullish case and turn intraday bias neutral again. In that case, the corrective pattern from 1.0056 could extend with another falling leg through 0.9856 support before completion.