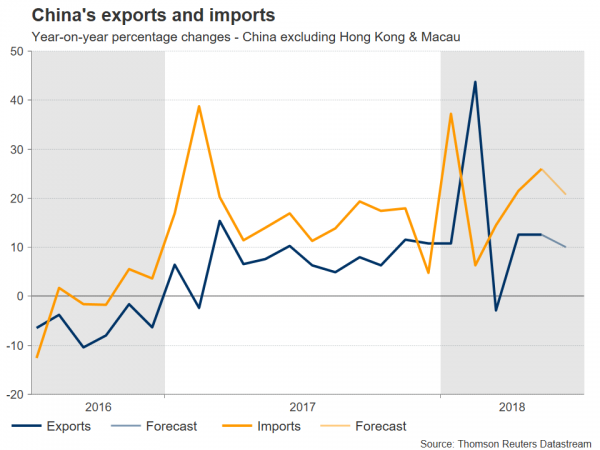 China will release its monthly trade balance data during the Asian session Friday, which will be followed by the nation’s quarterly GDP figures for Q2 early on Monday, alongside fixed asset investment, industrial production, and retail sales prints. The aussie – widely viewed as a liquid proxy for “China plays” – will be firmly in focus when these data are released, with the ongoing escalation in trade tensions between the US and China also a major consideration for its near-term direction.

Early on Friday, trade figures out of the world’s second largest economy will hit the markets. There’s no specific time for the release. Forecasts suggest China’s trade surplus is set to have widened in June (in dollar terms), with both exports and imports expected to have risen again, albeit at a slower pace. Specifically, exports and imports are projected to have risen by 10.0% and 20.8% respectively in June from a year earlier, down from the corresponding 12.6% and 26.0% readings in May, resulting in a widening of the nation’s trade surplus to $27.6bn, from $24.9bn previously.

In light of the escalation in US-China trade tensions lately, the financial community will likely look to the export numbers to gauge whether the rhetoric is catching up with the numbers. In other words, whether uncertainties around the trade outlook have already begun to show up as a drag on export growth.

After the trade data, on Monday at 0200 GMT, China’s GDP for Q2 will be released, accompanied by updated figures on fixed asset investment, industrial production, and retail sales, all for June. GDP growth anticipated to have slowed slightly to 6.7% in yearly terms, from 6.8% in the previous quarter. Both fixed asset investment and industrial production are projected to have eased a little in the year to June, growing by 6.0% and 6.5% respectively, against May’s corresponding prints of 6.1% and 6.8%. Retail sales, meanwhile, expected to have accelerated to 9.0%, from 8.5% previously.

While a slowdown in economic growth may be perceived as a negative development at first glance, this may not necessarily hold true in China’s case. In recent years, Chinese growth was fueled in large part by a massive expansion of credit and bank lending. This process carries significant risks, such as generating financial imbalances and credit bubbles. Thus, Chinese authorities have pledged to clamp down on excessive lending, to limit such risks. While this could hinder growth in the short-run, it also makes the situation more sustainable over the longer-run, resulting in a regime of slower but higher-quality economic expansion. It’s also worth considering that China’s growth target is 6.5% annually and even accounting for the anticipated slowdown, the figure is still expected at 6.7%, safely above its mark.

Separately, note that the nation’s year-over-year (YoY) GDP print has displayed a tendency to overshoot forecasts in recent years, having surprised to the upside in four of the preceding six quarters, while it was in line with forecasts twice over that period. The last time the yearly figure surprised to the downside was back in 2014. While the same does not hold true for the quarter-over-quarter (QoQ) number, markets tend to focus more on the yearly print.

Turning to the FX market reaction, besides affecting the yuan, these data could also have an impact on the aussie – which is broadly considered a liquid proxy for China’s economy, given the close economic ties between Australia and China. Hence, stronger-than-anticipated figures could benefit the aussie, and vice-versa.

Beyond economic data, the aussie is likely to remain highly sensitive to any developments on the trade front, where the situation has escalated further lately, with the US announcing it is considering another round of tariffs on Chinese products. Australia is a large, open economy that relies heavily on commodity exports. Hence, the increasingly realistic prospect of a US-China trade war is casting a long shadow on the aussie, evident by its stark underperformance in recent months. Any signs of even further escalation in the coming weeks could keep the currency under pressure, whereas any hints that tensions may be subsiding may trigger a substantial relief rally.

Technically, looking at aussie/dollar, further declines could encounter preliminary support near the 18-month low of 0.7308 posted on July 2. A downside break may open the way for 0.7245, defined by the inside swing high on 30 December 2016, before attention turns to 0.7155, the low from 23 December 2016.