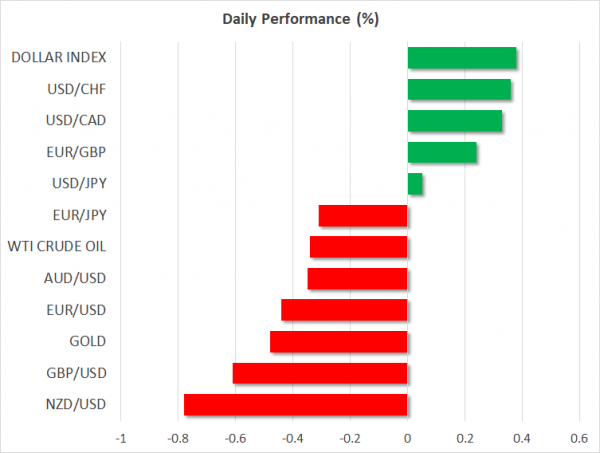 FOREX: The US dollar index (+0.38%) continued its march higher during the European trading session on Friday, with little in the way of fresh news to guide price action. It is currently trading near 95.18, and if the bulls remain in control, it could soon test its highs for the year at 95.53. Reflecting the strength in the US currency, euro/dollar is down by 0.42% at 1.1622. Dollar/yen, although having surged earlier in the session to touch a fresh six-month high, has given back all its gains to trade virtually unchanged on the day, pressured by a tumble in longer-term US Treasury yields. Sterling/dollar (-0.61%) is being weighed on by remarks from US President Trump – who is currently visiting the UK – that PM Theresa May’s latest Brexit plan would “probably kill” the prospect of a US-UK trade deal, as the US would be dealing with the EU instead of the UK. In the commodity-currencies space, dollar/loonie is up by 0.33%, with the Canadian currency dragged by a further pullback in oil prices. Aussie/dollar is lower by 0.35% while kiwi/dollar is down by 0.77%, both pairs trading not far above the respective one-and-a-half and two-year lows they posted last week.

STOCKS: European stock benchmarks were trading higher for the most part at 1100 GMT, though the gains were short of impressive. The pan-European STOXX 600 was up by 0.19%, while the blue-chip STOXX 50 advanced by 0.17%. In the UK, the FTSE 100 surged by 0.45% amid sterling weakness. Since the index is heavily populated with multinational companies that earn most of their revenue in foreign currencies, a weaker UK currency typically boosts the FTSE. The German DAX 30 rose by 0.24%, the French CAC 40 gained 0.43%, while the Italian FTSE MIB edged up by 0.38%. The only index in the red was the Spanish IBEX 35, down by 0.27%. In the US, futures tracking major indices such as the S&P 500 and the Dow Jones are in the green, pointing to a higher open today, albeit only marginally so.

COMMODITIES: In energy markets, oil prices extended their recent losses on the back of a soaring US dollar, which renders the dollar-denominated precious liquid less attractive for investors using foreign currencies. West Texas Intermediate (WTI) was down by 0.26% at $70.15, while London-based Brent crude fell by 0.70% to $73.97 per barrel. Later in the day, the Baker Hughes survey tracking active US oil rigs will be in focus at 1700 GMT. In precious metals, gold is down by 0.46% at $1240 per ounce and looks to be gearing up for a test of its lows for the year, at $1237. Meanwhile, silver is lower by 0.82% at $15.77.

Day ahead: US Michigan Consumer Confidence index in focus; Trump on his first visit to London

Friday’s calendar has a few economic releases to deliver in the remainder of the day, with the US Michigan consumer confidence index attracting the most attention. Trade developments could remain a key theme as China has shown no appetite so far to respond to Trump’s new tariff threats that could target $200 billion Chinese imports.

At 1400 GMT, the University of Michigan is scheduled to publish preliminary readings for the US consumer confidence, with analysts projecting the index to decline to 98.2 in July from 99.3 seen in the preceding month. Earlier at 1230 GMT, export and import prices for US products will come into view as well, providing an update on inflation. The monthly data, though, are anticipated to come in weaker in June. An upside surprise in the above figures and more importantly a stronger-than-expected Michigan consumer confidence index could lead the dollar to fresh six-month highs. Still any negative headlines on the trade front could limit upside moves in the dollar market, shifting some interest to safer assets such as the yen. Note that earlier today, stats out of China showed that Chinese trade surplus with the US hit record highs in June, with the agency saying that both imports and exports with the US headed higher in the first half of 2018. These figures could enhance Trump’s protectionist attitude.

In the meantime, the US President has arrived at London for the first time since his election to meet the British Prime Minister, Theresa May. But having already criticized May’s Brexit plan earlier in an interview, saying that her proposals would probably “kill any trade deal with the US” the atmosphere at the meeting could be less positive. At the same time, the US Secretary of State, Mike Pompeo, will be meeting officials in Mexico including the newly elected President, Andres Manuel Lopez Obrador, with markets being particularly focused on any fresh comments on NAFTA.

Fed chief Jerome Powell’s prepared remarks for his semi-annual testimony before the Senate Banking Committee next week are due to come in light today at 1500 GMT.

In oil markets, Baker Hughes will report on the number of US active rigs drilling for oil at 1700 GMT, with prices possible to face some volatility following the release.

As for today’s public appearances, Bank of England Monetary Policy Committee member Jon Cunliffe will be giving a speech at 1100 GMT, while Atlanta Fed President Raphael Bostic (voting FOMC member in 2018) will be participating in a discussion at 1430 GMT.