In ETFs, the bigger the stock, the more money goes into it and that could be costing regular investors 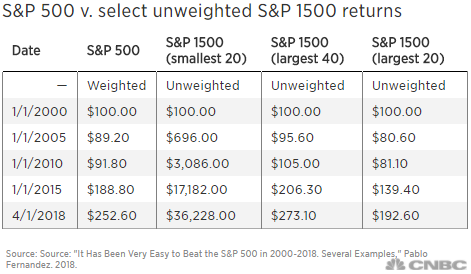 Huge sums of investor cash have poured into exchange-traded funds during this past year (and during the whole bull market) with billions of dollars sitting passively in funds betting on the very largest U.S. stocks.

But new research suggests this money is betting on funds with a methodology that might not offer the best returns for the regular person over the long term.

The weighting of stocks in most major indexes, and the ETFs tied to them, are based on market capitalization, meaning that big-company components can pull the index more than the little ones. For example, a 20 percent move in Apple can shift the entire S&P 500 by more than half a percent.

An equal-weighted index, on the other hand, treats all the companies equally in terms of how they can influence the group as a whole and in many cases, offered a better return to investors over the last 20 years, according to Pablo Fernandez, a finance professor at the University of Navarra in Spain.

That disparity grows even more pronounced as the size of the companies shrinks: $5 invested unweighted in each of the 20 smallest companies in the S&P 1500 in January 2000 would now be worth at least $36,000.

To be sure, the numbers cited by the paper may be skewed slightly since large cap technology stocks were gutted in the Dotcom bubble bust of March 2000. And the return numbers alone do not represent associated risks for each index with smaller companies sometimes being much more volatile.

Still, this debate is not a new one and it’s worth analyzing given that many of the globe’s most popular ETFs use a market-weighted methodology.

The SPDR S&P 500 ETF (SPY) — the largest ETF on the market with $261 billion in assets under management — tracks a market-cap weighted index of the S&P 500. BlackRock, the largest asset manager in the world, runs the iShares Core S&P 500 ETF (IVV), another S&P 500-tracking fund.

Investors have poured more than $17 billion into that ETF over the past year, according to FactSet fund flow data; Vanguard’s S&P 500 fund drew nearly $12 billion over the same time.

Chris Brightman of Research Affiliates says a simple equal-weighted strategy can do even better when combined with regular rebalancing.

That strategy, the CIO said, provided about a 2-percent premium over the market over several decades.

His firm, founded by Rob Arnott, has long advocated for weighting stocks by fundamental measures to garner better passive returns than the industry norm.

“We use the fundamental index, which targets an invest amount for each company which is proportional to its fundamental size. Things like size, cash flow and dividends,” said Brightman.

To be sure, though, equal weighed indexes don’t always outperform their market weighted cousins, especially during prolonged outperformance or underperformance in isolated areas of the market. Should a select few firms (or a sector) consistently outperform, for example, each time an investor rebalances their portfolio back to equal, they could be missing out on future gains in those areas.

The Invesco S&P 500 Equal Weight ETF, which replicates the performance of the equal-weighed S&P 500 index has returned 4.2 percent so far this year against the S&P 500’s 5.8 percent return. Much of that disparity is likely due to the prolonged outperformance in the larger technology stocks, which have a bigger weighting in the S&P 500.

But over the last ten years, the equal weight ETF has returned 11.8 percent annually, more than the 10.8 percent return from the S&P 500.