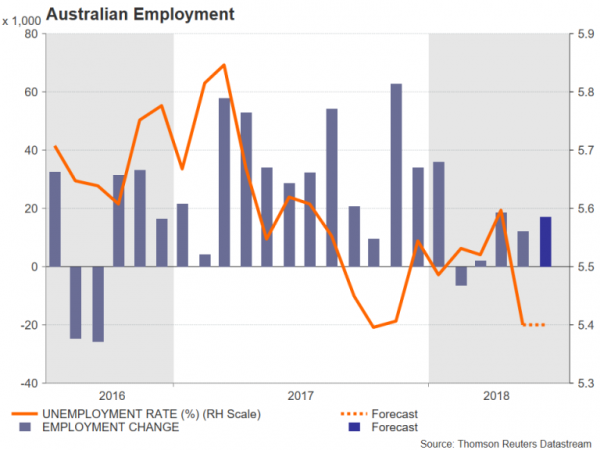 China will publish second quarter growth figures next week, putting the focus on China’s economy which has been under attack by the Trump administration. Inflation numbers from Canada, Japan, New Zealand and the United Kingdom will also come under the spotlight, as well as employment reports out of Australia and the UK. It will be a quieter week for the United States where only a handful of releases are due, but investors will be watching for President Trump’s next move in his trade fight with the rest of the world.

Aussie and kiwi look to domestic data for support

The Australian and New Zealand dollars are still reeling near roughly two-year lows that were plumbed early last week ahead of the enaction of the first round of tariffs on Chinese imports by the US. The two antipodean currencies had already been under downside pressure for much of the year on the back of the narrowing and now negative yield spread with the US. With both the Reserve Bank of Australia and the Reserve Bank of New Zealand set to stay on hold for some time yet, it will require a significant shift in the inflation outlook in the respective countries to bring the two central banks out of neutral mode.

New Zealand will see the release of quarterly inflation data on Tuesday pertaining to the April-June quarter. Given the weakening growth picture in the country in recent months and with annual CPI falling near the bottom end of the RBNZ’s 1-3% target band during the first quarter, a disappointing inflation reading for the second quarter would raise the prospect of the next change in rates being a cut than an increase. In Australia, the RBA will publish the minutes of its June policy meeting on Tuesday, and employment figures will follow on Thursday. While the growth outlook in Australia is stronger than across the Tasman Sea, inflationary pressures remain low. A tightening labour market has so far not done much in pushing up wages. But a further expected improvement in employment in June would reassure investors that wage growth should pick up over time.

China will be the first among the large economies to publish second quarter growth data next week. The GDP numbers due on Monday are forecast to show growth slowing from 6.8% to 6.7% year-on-year in the three months to June. That would make it the mildest pace of expansion since the third quarter of 2016. However, while the trade dispute with the US has been simmering for the past few months, it’s too early for there to be a notable impact from the US tariffs already in place and any slowdown would be down to the government’s deleveraging efforts and crackdown on risky lending. These effects can already be seen in weaker investment readings. Fixed asset investment slowed to an annual rate of 6.1% between January-May, the lowest since 1996. It is expected to slow further in June to 6.0% in figures to be released alongside the GDP report. Completing Monday’s set of data from China will be industrial output and retail sales numbers for June.

The Bank of Japan’s progress in lifting inflation towards its 2% goal has stalled in recent months. After hitting a 3-year high of 1% in February, the 12-month rate of core CPI has since eased to 0.7%. It is forecast to tick higher in June to 0.8%. But the snail’s pace progress means the BoJ will stick on the course of ultra-loose monetary policy for a while longer. The inflation figures are due on Friday and ahead of that on Thursday, June trade numbers will be released. Japanese export growth rebounded sharply in April and May following a dip in the first quarter. Another strong reading in June would be further confirmation of a return to positive growth in the second quarter.

The Eurozone and the UK will also see inflation figures next week, though with the Eurozone ones being the final readings, they’re not anticipated to attract much attention. Headline inflation in the euro area accelerated to 2% in the preliminary print and no revision is expected on Wednesday. It’s been a somewhat different story in the UK where inflation has been above 2% since 2017 and has surprised many analysts as well as policymakers by the pace at which it’s declined after it shot to 3.1% late last year following the pound’s deprecation from the Brexit referendum in 2016. However, UK inflation data due on Wednesday are forecast to show the CPI rate turning higher again, rising to 2.6% year-on-year in June from 2.4% in May. The core rate is also expected to edge up, by 0.1 percentage points to 2.2%.

Other data to watch out of the UK are Tuesday’s labour market report and Thursday’s retail sales numbers. Britain’s unemployment rate is forecast to remain unchanged at 4.2% and average weekly earnings are also anticipated to hold steady at 2.5% y/y in the three months to May. Retail sales meanwhile are expected to moderate in June, with sales growing by 0.4% month-on-month compared with 1.3% in the prior month.

The three reports will be the last major indicators for the Bank of England to gauge before its August 2 policy meeting. A strong set of figures will therefore be seen as boosting the chances of a rate hike and would lift the pound.

The inflation theme will continue with Canada, while there will also be more retail sales data to sift through, with both Canada and the US reporting their monthly series. The Canadian and retail sales numbers are due on Friday but with the Bank of Canada’s rate hike out of the way and the developments in the oil market, the data may not prove a significant driver for the Canadian dollar.

In the US, the retail sales release on Monday will be the main highlight. Retail sales are forecast to rise by 0.5% m/m in June, less than the 0.8% growth in May but nevertheless representing another solid pace. On Tuesday, the focus will be on industrial and manufacturing production figures, which are expected to show a rebound in June after a contraction in May. Building permits and housing starts for June are due on Wednesday, and on Thursday, the Philly Fed manufacturing index will round up the week.

Positive surprises, particularly in the retail sales numbers, could help the US dollar extend its gains beyond this week’s 6-month high of 112.79 yen. However, a bigger risk for the greenback is likely to be Fed Chairman Jerome Powell’s testimony before Congress on Tuesday, where he will give his latest monetary policy assessment to US lawmakers. Investors will be watching if the Fed is becoming concerned about overshooting its inflation target and whether the central bank is worried about the impact of the escalating trade tensions on the US economy.