Euro Lifted as EU Made Progress With China, Dollar Soft after Retail Sales 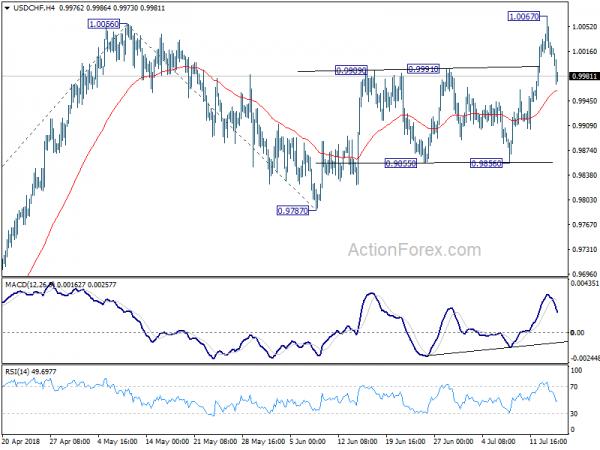 Dollar remains generally weak in early US session despite a mild lift from retail sales data. While the greenback and Japanese yen are competing as the weakest one, Canadian Dollar joins the race as WTI crude oil drips below 70 handle. European majors are generally firm with Euro supported by the positive development in the high level summit between European Union and China in Beijing. Tusk and Juncker are travelling to Japan tomorrow and there would be some more positive news. On the other hand, while Trump is meeting Putin in Helsinki, expectations on the summit is rather low.

Oil price remains a key factor driving the Loonie. The impact of last week’s hawkish BoC rate hike was more than offset by the steep fall in oil price. WTI crude oil hit as high as 75.27 earlier in the month but it’s now back below 70. Oil price will possibly stay pressured as Trump administration is actively considering to tap into emergency supply of oil. Trump tried to “order” OPEC to do something to lower oil price but such intervention in the cartel was cold-shouldered. For now, USD/CAD is holding well above 1.3067 key support level, which maintains near term bullishness. Renewed selling in oil could send USD/CAD through 1.3216 minor resistance towards 1.3385.

US headline retail sales rose 0.4% mom in June, above expectation of 0.4% mom. Prior month’s figure was revised sharply higher from 0.8% mom to 1.3% mom. Ex-auto sales rose 0.4% mom, matched expectations. Prior month’s figure was also revised sharply higher from 0.9% to 1.4%. Empire state manufacturing index, general business conditions, dropped to 22.6 in July, down from 25.0 but beat expectation of 20.3. Expectations six months ahead dropped -7.8 to 31.1.

EU and China issued a joint statement reaffirming their “commitment to deepening their partnership for peace, growth, reform and civilisation, based on the principles of mutual respect, trust, equality and mutual benefit, by comprehensively implementing the EU-China 2020 Strategic Agenda for Cooperation”. The statement is released after meeting of European Council President Donald Tusk, European Commission President Jean-Claude Juncker and Chinese Premier Li Keqiang in Beijing.

In the statement, it’s noted that both sides are “strongly committed to fostering an open world economy, improving trade and investment liberalisation and facilitation, resisting protectionism and unilateralism”. And, they “firmly supported the rules-based, transparent, non-discriminatory, open and inclusive multilateral trading system with the WTO as its core”. At the same time, they pledged to work on reform of the WTO and “establish a joint working group on WTO reform, chaired at Vice-Ministerial level, to this end.”.

The EU “took note of China’s recent commitments to improving market access and the investment environment, strengthening intellectual property rights and expanding imports, and looks forward to their full implementation as well as further measures”. Both sides pledged to ensure “a level playing field and mutually beneficial cooperation in bilateral trade and investment”. “Ongoing Investment Agreement negotiations” are seen as a “top priority”. And, they agreed to “accelerate the negotiation of the Agreement on the Cooperation on, and Protection of, Geographical Indications” and hoped to conclude it by next meeting on July 25-27.

Both sides also recalled that the Joint Comprehensive Plan of Action (JCPOA) Iran nuclear deal is a “key element of the global non-proliferation architecture and a significant diplomatic achievement endorsed unanimously by the UN Security Council in its Resolution 2231.” And the “reaffirm their commitment to the continued, full and effective implementation of the JCPOA.”

EU Juncker to China: Actions are more important than words

In the post meeting joint conference with Li ,  Jean-Claude Juncker expressed his concerns that  European Foreign Direct Investment into China have hit a low in 2017, at only around EUR 6B. That’s massive difference to Chinese investment in EU at EUR 30B. And Juncker pointed out “this gap reflects a concern amongst our investors on the regulatory and administrative burden that foreign companies sometimes have to face in China.”

Nonetheless, Juncker hailed the “first exchange of offers” on the  Comprehensive Agreement on Investment with China. He saw that as “an important step”. That it’s ” only the first one” and “what we need is an Agreement that fulfils our common ambition and gives investors on both sides predictable and long-term access to our respective markets.” Juncker emphasized to China that “actions are more important than words.

EU Tusk called for brave and responsible reform of rules-based orders, rather than trade wars

Tusk said in the same press conference that “the world we were building for decades” has brought about ” peace for Europe, the development of China, and the end of the Cold War between the East and the West.” He emphasized that it is “common duty of Europe and China, America and Russia, not to destroy this order, but to improve it.” He urged “not to start trade wars, which turned into hot conflicts” but “to bravely and responsibly reform the rules-based international order.”

He called on China, Trump and Putin to start the process from reform of the WTO as “there is still time to prevent conflict and chaos.” He pointed to the “dilemma” of “whether to play a tough game such as tariff wars and conflicts in places like Ukraine and Syria, or to look for common solutions based on fair rules.”

Tusk also reiterated that the EU is committed to “modernisation of the WTO” and “propose a comprehensive approach to improving, together with like-minded partners, the functioning of the WTO in crucial areas.” And he called for “like-minded partners” to work together to “strengthen the WTO as an institution and to ensure a level playing field.”

German Maas: Europe must not be divided by verbal attacks and absurd tweets

German Foreign Minister Heiko Maas warned that Europe can “no longer completely rely on the White House”. And “to maintain our partnership with the USA we must readjust it”. The first “clear consequence” is that Europe must “align ourselves even more closely”. And he urged “Europe must not let itself be divided however sharp the verbal attacks and absurd the tweets may be.”

Maas also warned Trump, as the latter is meeting Russian President Vladimir Putin in Helsinki, that “unilateral deals at the expense of one’s own partners also harm the US in the end.”

In the bigger picture, rise from 0.9186 is seen as a leg inside the long term range pattern. After drawing support from 55 day EMA, it’s now resuming for 1.0342 key resistance. For now, we’d still cautious on strong resistance from there to limit upside. Meanwhile, break of 0.9787 support is needed to signal completion of the rise. Otherwise, outlook will remain bullish even in case of deep pull back.