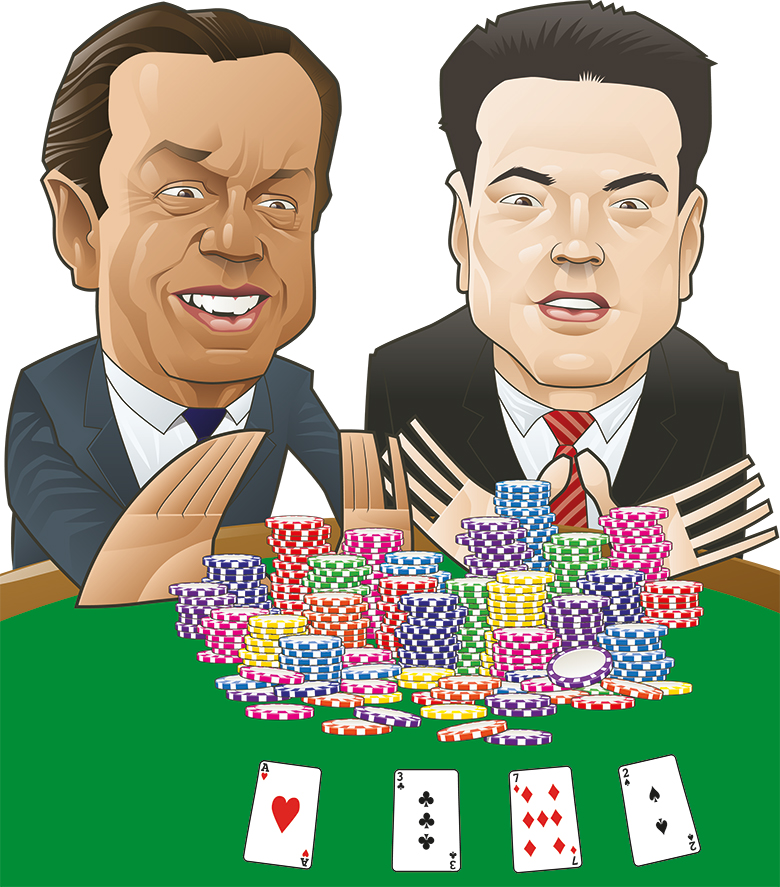 His former employer has never recovered from the excesses of the era, when a group of derivatives experts built a trading business that eventually proved to have serious long-term risk-management flaws.

The day after its recent stress-test failure in late June, Deutsche’s stock price was below €10 – or less than a quarter of the price when Misra left in 2008.

The reasons provided by the Federal Reserve for singling out Deutsche as the only firm to fail the stress test this year are worth citing in full.

“Those concerns include material weaknesses in the firm’s data capabilities and controls supporting its capital planning process, as well as weaknesses in its approaches and assumptions used to forecast revenues and losses under stress,” the Federal Reserve said.

Now Misra and a group of veteran bankers – many of them former Deutsche colleagues – are becoming increasingly important to the functioning of SoftBank, a hard-to-understand technology conglomerate.

Misra runs the SoftBank Vision Fund, which is the biggest technology investor in the world. He serves on SoftBank’s board and was in June promoted to executive vice-president, which led to articles in different venues speculating that he is a candidate to replace Masayoshi Son as chief executive in the event that the founder of the company steps down.

Son is a canny political operator who has a mild-mannered, avuncular presentation style that masks the fact that his public statements are becoming increasingly bizarre.

In an address of almost two hours to SoftBank’s recent annual general meeting in Tokyo, Son took time to tackle the enormous discount between the nominal value of its assets and its stock price, which effectively represents market scepticism about Son’s long-term ability to generate tangible revenue from his technology bets.

Son framed this as an opportunity for future outperformance and did not discuss the obvious risk that many of SoftBank’s investments will suffer losses, or how the firm’s increasingly complex financial structure might perform under conditions of global market stress.

Instead, he repeated some of his almost nonsensical mantras about the shape of the future and SoftBank’s role in the era to come.

In one section of the presentation he asked the rhetorical question: “What did I invent?”

He proceeded to deliver the answer, which was “the cluster of number 1 strategy”, which has apparently given birth to an “organizational structure that keeps growing for 300 years”.

In case anyone in the audience was concerned that this type of compound growth and control of the top company in any given sector might create a SoftBank monster that will exert undue influence over its human subjects, Son had assurances about the benign nature of his mission.

SoftBank hopes to become “a company that has the greatest impact on humanity over 300 years” he said, and the “company that makes (the) most contribution to human evolution”.

Son accompanied these worthy, if abstract, goals with pictures of other planets and solar systems.

Back on planet Earth, the revenue and personal remuneration targets of SoftBank’s senior employees are presumably on a shorter time-frame than three centuries.

They are not transparent, however. And some of the recent changes in valuations in stakes taken by the SoftBank Vision Fund raise concerns that SoftBank could eventually come to resemble Deutsche Bank – an enterprise that works wonderfully for a while but eventually becomes so ungainly that it ends up destroying shareholder value.

The reported decision to invest another substantial amount of capital in WeWork, in addition to an existing $4.4 billion stake, is one example of an odd approach to valuation by SoftBank, as the additional cash would supposedly value the office space rental firm at roughly twice the nominal $20 billion value when SoftBank took its original stake just under a year ago.

Looked at one way, SoftBank could claim to have doubled the value of its stake. Great returns guys! Looked at another way, SoftBank has simply driven up the value of a shared office company that markets itself like a transformational technology startup but has no clear differentiating factor except an insatiable appetite for property leases in prime business locations like New York and London.

It isn’t clear how grandiose marketing claims from WeWork founder Adam Neumann will help if property markets weaken during a recession, but it is easy to picture a future where the firm comes under financial stress.

SoftBank appears to have increased its engagement with media in recent months, which may explain the growing number of profiles of Misra speculating that his financial wizardry has increased his chances of succeeding Son at the helm of SoftBank.

This raises questions about the source of reports that SoftBank is considering another unusual structure to fill the gap between the roughly $93 billion it raised from investors, including Saudi Arabia, for the Vision Fund and the $100 billion that was its target for initial investment.

One option reportedly under consideration is the establishment of a debt-based vehicle of around $5 billion that would give former bankers such as Misra and his former colleague at Deutsche, Colin Fan, a stake in the performance of the Vision Fund.

That approach would be reminiscent of practices at Deutsche, where employees were given opportunities to co-invest in deals done by the bank. Those investments came to light last year when Fan sued Deutsche for unpaid bonuses following his departure. Deutsche said in court filings at the time that the withholding of $13 million in bonuses came after a probe found Fan’s personal investment trades violated conflict of interest rules.

The disputed investments included a credit index-linked note that the bank was involved in issuing. Reports earlier this year suggested that Fan, who had risen to become co-head of global investment banking before his departure, had reached a settlement with Deutsche running to several million dollars.

Deutsche itself is still reeling from the after-effects of the decision to effectively stick all the firm’s chips on an attempt to copy the Goldman Sachs model of those years, with its emphasis on fixed income trading revenues and the heavy use of leverage via derivatives.

Time – probably less than 300 years of it – will tell if Misra and his colleagues at SoftBank engineer a tech conglomerate for the ages. But if SoftBank is one day seen to have risk-management flaws that are exposed by stresses in financial markets, it could be argued that shareholders would have been wise to pay more attention to the lessons of the past.