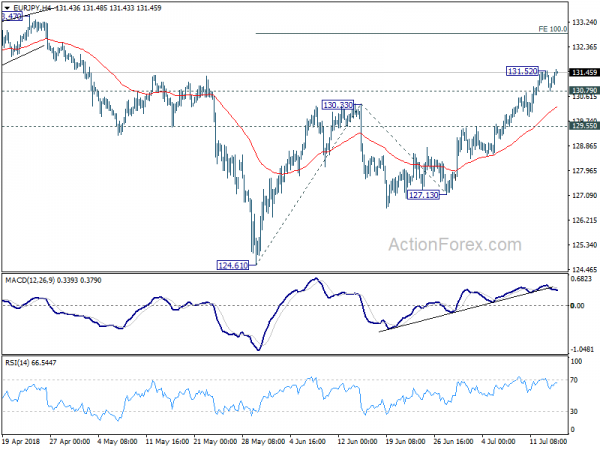 Asian markets are weighed down slightly by a batch of soft economic data from China, but loss is limited so far. At the time of writing, China Shanghai SSE is down -0.47% and stays above 2800 key level throughout the session. Hong Kong HSI is down -0.17%. Singapore Strait Times is down -0.84%. Nikkei is on holiday today. In the currency markets, Yen is trading broadly lower with EUR/JPY and GBP/JPY breached last week’s highs. Dollar also weakens mildly as recent near term consolidation is set to extend with another pull back. Sterling is trading as the second strongest one for today. But it’s going to face a look of political an data risks ahead in the week.

Technically, as we pointed out in the weekly report that Dollar’s up trend is not ready to resume yet. We’ll likely see more pull back against Europeans, and possibly against Australian Dollar too. But we’re not anticipate steep selloff there. Two Euro crosses are worth a watch today. EUR/GBP’s rally attempt failed last week but it’s staying above 0.8808 minor support, thus retaining near term bullishness. However break of 0.8808 will be a sign of near term bearish reversal. Similar, despite all the volatility, EUR/AUD is holding above 1.5696 minor support and stays near term bullish. But a solid break of this support level will also be a sign of near term bearish reversal.

EU Tusk and Juncker in China for talk on trade, investment and climate change

European Council President Donald Tusk and European Commission President Jean-Claude Juncker will meet with Chines Premier Li Keqiang in Beijing today for discussions on some practical discussions. Ahead of the meeting European Commission spokesman Margaritis Schinas said the meeting will focus on “trade and investment, on the commitment to combating climate change and investing in clean energy and on foreign and security issues, including the situation on the Korean peninsula”. And, the two sides will also talk on the joint commitment to the Iran nuclear deal.

Chinese Ambassador to the EU Zhang Ming wrote in an article in the official People’s Daily, urging to deepen cooperation to address global challenges. In particular, he said both sides should “send out a positive message to safeguard multilateralism, liberalize and facilitate trade and investment.” Zhang added that “Both of them recognize the necessity to firmly resist unilateralism and trade protectionism, guard the rule-based multilateral trading system with the WTO at its core, push economic globalization in the direction of becoming more open, inclusive, balanced and beneficial to all, reform multilateral trading system with the times, and perfect global economic governance system.

UK Prime Minister Theresa May is going to face tough challenges on her Brexit Plan and even her political survival this week. The Brexit Taxation (Cross-Border Trade) Bill will return to the Commons today. Hard-line Brexiteers are planning to show their strength in support with new amendments, which May is expected to defend. For now it’s unlikely for May to be defeated on the amendments. But the debates and vote could reveal the extend of objections to the compromised Brexit plan made at the Chequers. Then the Brexit Trade Bill will come to the commons for third reading on Tuesday. Wednesday is seen as an informal deadline to hold a no-confidence vote in May or there won’t be enough time before parliament breaks up for the summer.

Ex-Brexit Minister David Davis blasted May’s plan in an article in the Sunday Times, saying it was an “astonishingly dishonest claim” to said there is no worked-out alternative. And he warned that “be in no doubt: under the government’s proposal our fingers would still be caught in this mangle and the EU would use it ruthlessly to punish us for leaving and handicap our future competitiveness.”

Bundesbank Weidmann told Cabinet: As political risks increase, the government should be prepared to tackle the next crisis

According to a report by Handelsblatt, Bundesbank head Jens Weidmann warned the German Federal Cabinet last week that that even though growth is still “intact”, political risks would “increase”. More importantly, Weidmann pointed to the slow down in momentum and the downward revision in 2018 growth forecasts from 2.5% to 2.0%. The drop in momentum, according to Weidmann, is a prove that “good economic development could not go on forever”. The risks include US protectionist trade policy, Brexit and new geopolitical conflicts.

Weidmann urged the government to prepare for worse times. It takes some time to normalize monetary policy. And for now, ECB “could not react in the next downturn”. And because of that, fiscal policy must take on the task should there be a new crisis. But due to their high debt levels, many Eurozone countries would also have limited ability to “cushion” a down turn.

Italy’s far right Interior Minister Matteo Salvini said on Sunday that the country is allowing some of the asylum seekers from Libya to disembark in Sicily. Prime Minister Giuseppe Conte set letters to head of state of other EU nations asking to share responsibility on the Libya migrants. In response, Germany, France, Spain, Portugal and Malta have agreed to take 50 people each.

“Spain will take in 50 of the people rescued yesterday in the Mediterranean. This shows our commitment to offer solutions to migration flows and solidarity with the humanitarian drama,” Spanish Prime Minister Pedro Sanchez confirmed and tweeted.

Trump and Putin to meet with low expectations

Trump and Russian President Vladimir Putin are going to have their first ever summit today in the Finnish capital Helsinki. Ahead of the meeting Trump said he was going in with “low expectations”. National security adviser John Bolton said the meeting would be “unstructured” and the US was not looking for “deliverable”. Russian Foreign Minister Sergei Lavrov echoed and said he had low expectations too.

Trump said last week, before the NATO summit, that Putin “may be the easiest” among NATO and UK. And asked if Putin is a friend of foe, Trump said “I really can’t say right now. As far as I’m concerned, a competitor.” Later on Sunday, Trump said in a CBS interview that “I think we have a lot of foes. I think the European Union is a foe, what they do to us in trade. Now you wouldn’t think of the European Union but they’re a foe.” He added that “Russia is a foe in certain respects. China is a foe economically, certainly they are a foe. But that doesn’t mean they are bad. It doesn’t mean anything. It means that they are competitive.” So it doesn’t matter what the meaning of “foe” is as Trump sees Russia, China and EU as “they”.

On the other side, EU seems to be having some emotional responses to what Trump said. European Commission Vice President Frans Timmermans said on Twitter that “calling your best friends foes only makes your real foes happy.” And, “Europeans and Americans are bound by history and their shared values. Europeans will never give up on America because America never gave up on us. That’s what friends are for.” European Council President Donald Tusk said on Twitter that “America and the EU are best friends. Whoever says we are foes is spreading fake news.”

Fed Powell to testify this week

The upcoming week is important for a number of currencies. Fed Chair Jerome Powell’s Congressional testimonies will catch most attentions. US will also release retail sales while Fed will release Beige book report. Nonetheless, we’re not expecting any change to Fed’s rate outlook out of the week. UK will release the last batch of key economic data before BoE meeting on August 2. CPI, employment and retail sales will be featured. Upside surprises in these data will nail the case of an August hike. Other events to pay attention to include RBA minutes and Australia employment, New Zealand CPI, Japan CPI, Canada retail sales and CPI.

Here are some highlights for the week ahead

In the bigger picture, the strong break of channel resistance from 137.49 suggests that the decline from there as completed. The three wave structure suggests that it’s a correction. With 124.08 key resistance turned support intact, medium term bullishness is also retained. Break of 133.47 will affirm this bullish case and target 137.49 and above. This will now be the favored case as long as 127.13 support holds.