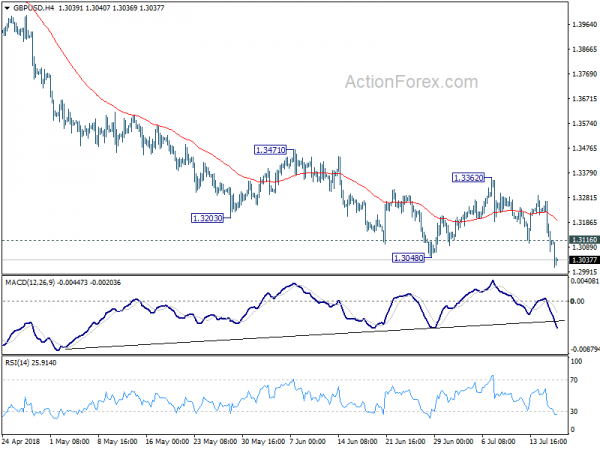 Sterling’s selloff accelerates as UK CPI missed market expectations. And that lowers the chance of a should-be-done-deal August BoE hike. In the background, Brexit uncertainty is also weighing on sentiments towards the Pound. Meanwhile, Australian Dollar and Euro are trading as the second and third weakest ones. Dollar is generally firm today as support by Fed Chair Jerome Powell’s optimistic comments. But the greenback is firstly overwhelmed by the strength in Swiss Franc. Yen is also lifted by some buying in early US session as China seems to be stepping up with its rhetorics against US protectionism again.

BoE has been expecting pickup in inflation that is now not happening. And indeed core CPI actually slowed. The once near confirmed August BoE rate hike is now back as a question. Tomorrow’s retail sales data will be another test for the Pound. And there will be UK PMIs in around two weeks’ time. The path to a hike is not easy for BoE.

In the background, there Brexit uncertainty is always there despite all the things the Prime Minister Theresa May has done. May insisted to the Parliament today that “the Chequers agreement, the white paper are the basis for our negotiation with the European Union and we have already started those negotiations.” And she also added that the EU “need to be in no doubt that we are making those preparations” for no deal Brexit.

Irish taoiseach, Leo Varadka warned today that “We can’t make assumptions that the withdrawal agreement will get through Westminster. ” And he added that “It’s not evident, or not obvious, that the government of Britain has the majority for any form of Brexit, quite frankly.” He’s government is stepping up the preparation for a no-deal Brexit. EU chief Brexit negotiator Michel Barnier will report to European Council regarding May’s white paper. And, it’s reported that Barnier’s draft document including words like the consequences of no-deal Brexit will be “very real for citizens, professionals and business operators”.

The Chinese Ministry of Commerce said in a statement today that it will take “further actions” to balance the impacts of the US section 232 steel and aluminum tariffs. It condemns the US of using “national security” as excuse for practicing trade protectionism. And criticized the steel tariff measures are a ” a serious damage to multilateral trade rules and undermine the legitimate rights and interests of WTO members”. Further then that, the US “refused to respond” to Chin’s WTO complaints.

Fed Powell to have second half of Congressional Testimony

Fed chair Jerome Powell will have his second half of Congressional testimony today, at the House Financial Services Committee. As a recap to his remarks yesterday, he painted an optimistic picture of the US economy. He noted that “with appropriate monetary policy, the job market will remain strong and inflation will stay near 2 percent over the next several years.” And, “risk of the economy unexpectedly weakening as roughly balanced with the possibility of the economy growing faster than we currently anticipate.” He also affirmed the known policy path and said “the best way forward is to keep gradually raising the federal funds rate.”

Regarding US trade policy, Powell didn’t comment directly as expected. It should be reminded that Powell has already made his stance clear before. He doesn’t comment on policies he doesn’t make. And to guard the line of independence of Fed, he has to refrain from commenting on the administration’s policies too. Instead, he takes them as given. Though, he was willing to talk about trade from “principles” perspective. And to him, countries that embraced free trade and low tariffs used to have better results and higher productivity. Countries that have been more protectionist “have done worse”.

GBP/USD drops to as low as 1.3009 so far today. The break of 1.3048 low confirms resumption of whole decline from 1.4376. Intraday bias remains on the downside for 1.2874 fibonacci level next. Sustained break there will carry larger bearish implications. On the upside, above 1.3116 minor resistance will turn intraday bias neutral and bring consolidations first. But recovery should be limited well below 1.3362 resistance to bring fall resumption.