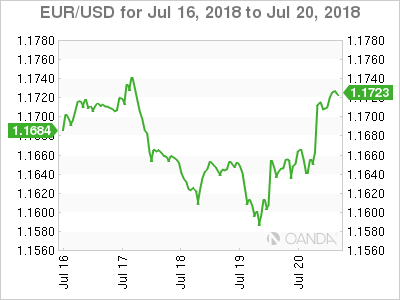 The USD fell against major pairs on Friday after US President Donald Trump tweeted that China and the EU manipulate their currency. Trade war escalation has reached a second phase at a time when American politics are having an identity crisis with the ongoing Russian interference during the 2016 elections. Steven Mnuchin will head to Buenos Aires to take part in the finance ministers G20 meeting with trade and monetary policies sure to be a topic of discussion. The European Central Bank (ECB) will announce its main refinancing rate on Thursday, July 26 at 7:45 am EDT with little expectations of a change. ECB President Mario Draghi will host a press conference at 8:30 am EDT with the market focused on his comments for insights into the monetary policy of the central bank.

EUR Rises Ahead of ECB as Currency War Concerns Rise

The EUR/USD gained 0.28 percent in the last week. The single currency is trading at 1.1717 after a volatile week is over. The EUR rose 0.73 percent on Friday as Trump’s comments on currency manipulation hit the newswires. The US dollar had fallen on Thursday after President Trump criticized the U.S. Federal Reserve for raising rates and eroding the competitiveness of American products.

In an interview with CNBC the US President said he was not thrilled with the path of interest rates, although he did mention that he would let them do what they feel is best. Earlier in the week Fed Chair Powell testified before the Senate Banking Committee and the House Financial Services Committee side-stepping any comments on trade spats.

The U.S. Federal Reserve has hiked two times already in 2018 leaving the benchmark rate at 175 to 200 basis points. The CME FedWatch tool shows a 86.9 percent chance of a September rate hike and 53.9 percent of a follow up in December. Both sets of probabilities where higher on Wednesday before Trump’s comments were released.

The economic calendar will not feature a large number of North American indicators with the main standout being the release of the first estimate of the US GDP data on Friday, July 27. Analysts forecast a rise of 4.1 percent and could serve as an antidote to Trump’s tweets. The European Central Bank (ECB) will feature on Thursday, but there is little expectation that new guidance will be provided after the June monetary policy meeting.

The Canadian dollar rose on Friday after the release of retail sales and inflation data. The USD/CAD DROPPED 0.05 percent on a weekly basis. The currency pair is trading at 1.3146 after Canadian retail sales surprised with a 2 percent rise to a seven month high boosted by auto and gasoline sales on Friday. Inflation rose 2.5 on an annual basis in June also impacted by higher gasoline prices. The economic indicators validate the decision of the Bank of Canada (BoC) earlier this month to hike rates by 25 basis points and could further pressure the central bank to lift rates higher despite growing geopolitical headwinds.

The US dollar has been on a downward trend since President Trump issued some sharp criticism on the U.S. Federal Reserve monetary policy. The comments took the market by surprise as talking about the currency is not usually the job of the President, but rather the Treasury Secretary. The statements will most likely be discussed as the G20 meeting in Buenos Aires kicks off.

The US President continued to tweet about the unfair strength of the greenback which responded by falling more than 1 percent against the Canadian dollar.

Oil prices recovered from losses earlier in the week but West Texas Intermediate will finish below $70 after concerns about the increase in supply outstripping rising demand.

The GBP/USD dropped 0.76 percent in the last five days. The currency pari is trading at 1.3133 with political headwinds keeping the pound under pressure. The confusing Brexit strategy from the UK government could end up costing Prime Minister May her job as she scrambles to call an early summer recess to avoid challenge to her leadership.

The Bank of England (BoE) held rates unchanged in June, but there were three dissenters. The economic data could support an August rate hike by the central bank, but the question now is will MPC vote for higher rates holding to its mandate, but with a high possibility that Brexit negotiations once again threaten the growth of the UK economy and the reverse action is needed. The market still believes in an August rate hike, but the GBP will continue under pressure from political uncertainty at home and abroad.