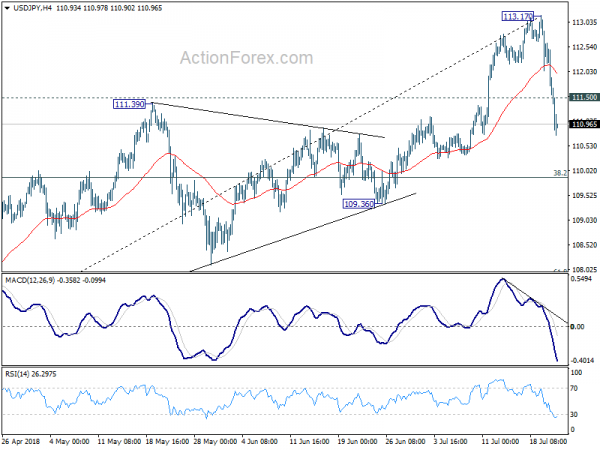 Yen trade broadly higher today as boosted by the steep rally in 10 year JGB yield. That also sends Nikkei sharply lower as it’s down -333 pts or -1.47% at the time of writing. Other Asian markets are steady thought with China Shanghai SSE trading up 0.37% and Hong Kong HSI up 0.15%. Swiss Franc follow as the second strongest one. Dollar, on the other hand, is extending Friday’s sharp selloff and is trading broadly lower today. It’s followed by Australian Dollar and Canadian Dollar as the next weakest.

10 year yield in Japan jumped as much as six basis points to 0.090%, hitting the highest level since February. It’s also the largest daily rally in nearly two years. The sharp movement prompted an unscheduled operation by BoJ to buy 10 year JGB at a yield of 0.11%. That’s the same level as at last intervention but no bid was tendered.

The movements were based on reports that BoJ is discussing changes to its monetary policy, including the interest-rate targets and stocks-buying techniques. The objective is to make the stimulus program more sustainable. Currently, under the Yield Curve Control framework, BoJ is buying JGBs to keep 10 year yield at around 0%. And the central bank could allow 10 year yield to rise higher to 0.10% to give more flexibility to monetary policy.

But when asked about the reports at G20 meeting in Argentina, BoJ Government Haruhiko Kuroda said “I know absolutely nothing about the basis for those reports.” And so far, reports suggested that BoJ policymakers are only in preliminary discussion on the way to tweak the policy. And it’s highly unlikely for any significant decision at the July 31 meeting.

G20 pledged to strengthen contribution of trade to the economies

G20 finance ministers and central bankers stepped up their language regarding trade tension in the communique after the meeting in Argentina. The communique noted that “risks over the short and medium term have increased”. And the risks include “financial vulnerabilities, heightened trade and geopolitical tensions, global imbalances, inequality and structurally weak growth, particularly in some advanced economies.” The group pledged to “continue to monitor risks, take action to mitigate them and respond if they materialise.”

The communique also noted that “international trade and investment are important engines of growth, productivity, innovation, job creation and development.” The group reaffirmed the conclusions on trade at the Hamburg Summit and “recognise the need to step up dialogue and actions to mitigate risks and enhance confidence”. And “we are working to strengthen the contribution of trade to our economies.”

Japan Suga: Returning to TPP is in the best interest of Japan and US

Japan Chief Cabinet Secretary Yoshihide Suga insisted over the weekend that returning to the Trans-Pacific Partnership trade agreement is in the best interests of both Japan and the US. The comments came in before meeting of Economy Minister Toshimitsu Motegi and US Trade Representative Robert Lighthizer for bilateral trade later this month. And that’s a clear indication that Japan is not interested in bilateral trade deal that the US is keen on pursuing. Suga added that “Japan is not going to do anything with any country that harms the national interest.” And, “with FTA negotiations too, we’ll handle them in that way.”

Finance Minister Taro Aso also said that “inward-looking policies would benefit no country.” And added that “excessive current account imbalances should be resolved through multilateral, not bilateral, framework. ” Also, “the matter should be dealt with through macroeconomic policy and a structural reform by rebalancing savings and investments, instead of imposing tariffs.”

May tried to defend the plan and said “this is a principled and practical Brexit that is in the mutual interests of the UK and EU, but it will require pragmatism from both sides.” But as the Sunday Times commented, “the problem for May is that the Chequers plan is viewed as too favourable to Britain by the EU, too unfavourable to Britain by the Brexiteers and unworkable by both.”

ECB meeting, US GDP and Australia CPI are highlights of the week

ECB meeting will be a highlight of the week but it’s unlikely to bring something new. It’s planning to taper the asset purchase program after September, and stop it after December. Interest rates will stay at present level at least through Summer 2019. The question is on whether ECB President Mario Draghi would clarify what exactly he means by Summer. But it’s unlikely as the words are seen as a balance between precision and flexibility. Instead, Euro could have bigger reactions to PMIs and German Ifo.

Elsewhere, European Commission President Jean-Claude Juncker’s visit to the US for trade will catch some headlines too. Let’s see if he can achieve any results to avert auto tariffs. There are also some important data to watch including US GDP, French GDP, and Australia CPI