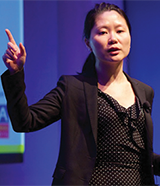 It’s symbolic of the oddness of Chinese banking that we could see a 14% increase in non-performing loans this year without asset quality actually having deteriorated at all.

This is, as UBS analyst Jason Bedford notes: “An oxymoron, since the key indicator for any bank that a loan is bad is when someone stops paying you back.”

Now, the rules are changing and these loans will have to be booked as NPLs, not Special Mention Loans, the category more commonly used for loans that are potentially troubled but not yet 90 days overdue.

Bedford has analyzed 222 banks in China and concluded that the impact of this change in loan recognition is potentially quite profound. Although assets themselves will not be getting any worse, just differently accounted for, the system-wide impact will be a 14% increase in NPLs in 2018 over 2017.

And the devil is in the detail. The big four banks will sail through this reasonably unscathed, but 95% of the impact will fall upon joint stock banks, city commercial and rural commercial banks. Rural banks will see a 33% increase, according to Bedford’s calculations.

And that in turn means a lot more provisioning. Chinese banks are required to hold an NPL provisioning ratio of 150%. Bedford believes 51 banks will fall short as a consequence and that the overall provisioning shortfall for the industry is Rmb250 billion ($36.7 billion).

It’s not great timing. CLSA’s Patricia Cheng says there is a record amount of bond and trust maturity in 2018, Rmb6.2 trillion in the second half alone, with increasing risks of default.

The regulator will allow some loan provisioning levels to be reduced upon meeting certain criteria, which is just as well, because otherwise some of these lenders are stuffed. In the single most extreme example, Liuzhou Bank, the application of this rule could increase NPLs more than seven times over.

The big four banks plus Postal Savings Bank of China have to comply with these rules almost immediately, but the impact is going to be almost meaningless for them It is the smaller banks who will be hit much harder and they have a grace period until 2019, which they will need to use wisely and swiftly.

All this supports the sense that the biggest banks in China are operating in an altogether different environment to all the others.

“Stick to large banks as asset management rules unfold,” said CLSA’s Cheng in April, with buy recommendations on Bank of China, CCB and ICBC, and sells on China Merchants Bank and Minsheng.

The big four, whose shadow banking operations and troubled loan disclosures are inconsequential relative to their balance sheet, will keep getting stronger, with one or two others hanging in with them; everyone else faces considerable regulatory headwinds at the same time as credit tightening and enforced deleveraging. It remains, as Euromoney noted in October, a tale of two Chinas.

Behind all this is a recognition that it is high time Chinese bad loan statistics reflected reality. Distorted by shadow banking and by regulatory quirks such as this, they can present China as a model of prudence even when its state-owned companies and even some of its provinces are bloated and indebted.

CLSA has previously argued that, thanks to shadow financing, China’s true banking sector bad debt level is 15% – even the change in loan recognition will only bring the system-wide level to around 2% officially.

Bedford highlights the case of Tangshan Bank, which has an official coverage ratio of 5,738% and an NPL ratio of 0.05%. But what does that really mean? Tangshan is an example of a bank where its official loan books are very small, just 15.8% of total assets. Banks like these instead tend to make investments into trust beneficiary right (TBR) and directional management plans (DAMPs), which are forms of shadow loans but do not appear in official loan book numbers. “Its NPL ratio,” observes Bedford, “is not necessarily a good reflection of its asset quality situation.”

It is said that Guo Shuqing’s appointment as the head of the China Banking and Insurance Regulatory Commission has been a driver towards international best practice. That should be welcomed. A China with an accurate, internationally acknowledged method of assessing impairment, coverage and exposure is a healthier China, and nothing really needs to be lost in achieving it.