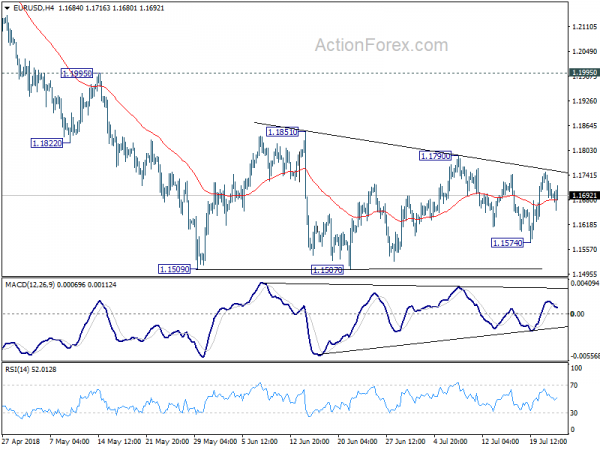 While the Japanese Yen is staying generally firm, Dollar fail to hold on to earlier gains and turns softer. While Euro strengthens mildly against Dollar, it’s upside is limited by lackluster PMI data. On the other hand, thanks to strong global risk appetite Australian and New Zealand Dollar regain much ground today. The economic calendar in US session is rather light today. Dollar pairs would probably continue to engage in corrective trading. The focus will be on whether US treasury yields, especially at the long end, could sustain this week’s strong rally, and thus give the greenback a helping hand.

In other markets, Europe indices are trading generally higher, with DAX up 1.53%, CAC up 0.98% and FTSE up 0.92% at the time of writing. That follow the strong rally in Asian equities. China Shanghai Composite jumped 1.61% to 2905.56 as boosted by the governments stimulus policies. While the announced measures are just fine-tunings and are hardly anything dramatic, that’s seen as a sign of the director where the Chinese government is heading towards. That is do more to support growth. Nikkei also rose 0.51% to close at 22510.48 and pared back much of Monday’s loss. Gold defended 1220 as recent consolidation extends, with help from the softness in Dollar. WTI crude oil continues to gyrate between 67/68 level.

Eurozone PMI manufacturing rose to 55.1 in July, up from 54.9 and beat expectation of 54.6. However, PMI services dropped to 54.4, down form 55.2 and missed expectation of 55.1. PMI composite dropped to 54.3, down from 54.9 and hit a 2-month low. Markit Chief Business Economist Chris Williamson said in the release that Eurozone started H2 on a ” relatively soft footing”. The July reading suggested Q4 GDP growth to slow from 0.5% to 0.4%. And, the “renewed slowdown comes as a disappointment, confirming suspicions that June’s rebound was temporary”.

He also pointed out that “the big question going forward will be the extent to which domestic demand can remain sufficiently resilient to cushion the eurozone economy from the potential adverse impact of an escalating trade war on exports. For now, the health of domestic demand seems encouragingly solid, but any feedthrough of trade worries to other sectors will be a key area of concern to an already cloudier-looking outlook.”

Japan PMI manufacturing dropped to 51.6 in July, hitting a 20-month low. That’s also below expectation of 52.7. Markit economist Joe Hayes noted in the release that the flash data pointed to a “slowing of growth momentum for Japan’s manufacturing sector at the beginning of the third quarter, following a robust performance so far this year.” New business grew at a “much weaker rate”. And export demand “deteriorated for a second month running.”

China unveiled fine-tuning policies measures to boost growth yesterday. Firstly, there will be targeted tax reduction for research and development spending, that could lower around CNY 65B in taxes. Secondly, monetary policy have to ensure ample liquidity in the markets. Financial institutions will be guided to use the RRR cuts to support small and micro businesses. Thirdly, the funding of the National Financing Guarantee fund will be speeded up to achieve the goal of supporting 150,000 small and micro businesses with CNY 140B in loans per annum. Fourthly, “zombie businesses” will be cleared out resolutely to manage systematic risks.

No change in EUR/USD’s outlook as it’s still bounded in the consolidation from 1.1509. Intraday bias stays neutral for more corrective trading and stronger rise cannot be ruled out. But upside should be limited by 1.1851 resistance to bring fall resumption eventually. On the downside , firm break of 1.1507 will resume larger down trend through 50% retracement of 1.0339 to 1.2555 at 1.1447.