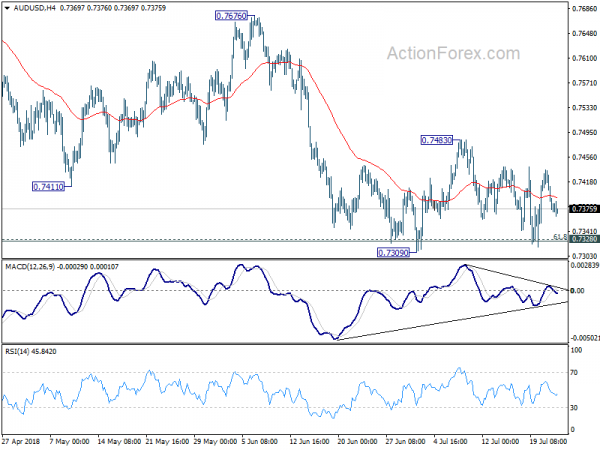 Yen and Dollar are trading as the strongest ones for today and the week, as boosted by treasury yields. In particular, the Yen shrugs off strong risk appetite in Asia, as led by Chines stock markets. 10 year JGB yield opened higher at 0.088 and stays firm at around 0.086 at the time of writing. It has been bounded in range of 0.023 and 0.049 in July up until this Monday. Judging from the current momentum, 10 year JGB yield is having 1% in sight. And that could provide the Yen with extra support.

Dollar also benefits from surging treasury yield, especially at the long end. It started with the strong rally in 30 year yield last Friday. Overnight, five year yield gained 0.060 to 2.828. 10 year yield rose 0.070 to 2.965. 30 year yield rose 0.073 to 3.104. Yield curve is clearly steepening again and that should ease the worries of some Fed officials. They’ll be more comfortable to continue with monetary policy normalization for the rest of the year, with two more rate hikes.

Technically, USD/JPY’s breach of 111.50 minor resistance indicates temporary bottoming in the pair. But for the near term, more downside is still mildly in favor. Other Dollar pairs are basically stuck in familiar range and more consolidations will be likely in near term.

BoE Broadbent unsure of his August Bank Rate vote yet

BoE Deputy Governor Ben Broadbent said yesterday that he hasn’t decide on his vote on the Bank rate in the upcoming meeting on August 2 yet. Markets were pricing in 80% chance of an August hike two weeks ago. But the chance dropped to around 50% after last week’s CPI miss. CPI had slowed notably from 3.0% in January to 2.4% in May, then stayed there in June. And, the impact of import inflation has faded much quicker than BoE has expected. Even if BoE does hike in August, it will be a one and done for the year.

Broadbent’s comment came after a speech on “The history and future of QE“. There he reiterated that the “framework” for unwinding QE was set out for some time in the November 2015 Inflation Report. That is, BoE would begin to start shrinking the balance sheet “only once the official Bank Rate had risen some way”. And that’s because “conventional policy is more flexible, better suited to responding to short-term economic fluctuations”.

At the initial guidance, Broadbent noted that the meaning of “well underway” means Bank Rate at “around 2%”. But in the June Monetary Policy Summary this year, the estimated threshold was lowered to “around 1.5%”. He also noted that “we don’t know exactly when that will be”. But, “the framework is designed to ensure that, should inflationary pressures weaken after that date, the first response would be to cut interest rates.” And, “in principle, those disinflationary influences might include the process of QE unwind itself.”

Japan PMI manufacturing dropped to 51.6 in July, hitting a 20-month low. That’s also below expectation of 52.7. Markit economist Joe Hayes noted in the release that the flash data pointed to a “slowing of growth momentum for Japan’s manufacturing sector at the beginning of the third quarter, following a robust performance so far this year.” New business grew at a “much weaker rate”. And export demand “deteriorated for a second month running.”

China unveiled fine-tuning policies measures to boost growth yesterday. Firstly, there will be targeted tax reduction for research and development spending, that could lower around CNY 65B in taxes. Secondly, monetary policy have to ensure ample liquidity in the markets. Financial institutions will be guided to use the RRR cuts to support small and micro businesses. Thirdly, the funding of the National Financing Guarantee fund will be speeded up to achieve the goal of supporting 150,000 small and micro businesses with CNY 140B in loans per annum. Fourthly, “zombie businesses” will be cleared out resolutely to manage systematic risks.

PMIs to highlight the day