Country risk: Colombia is on the springboard 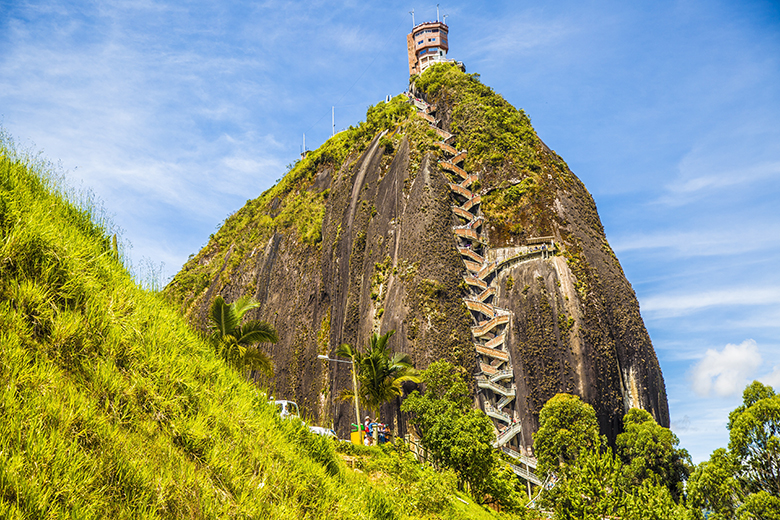 Much like tourists approaching Colombia’s Rock of Guatapé, the new government can see the way to the top, but it’s going to be hard work

He defeated the economist and former Bogotá mayor Gustavo Petro, of the centre-left party Colombia Humana, in a run-off vote in June, pleasing the financial community.

Duque is a former senator and a devout Catholic, who has expressed eagerness to govern from the centre, adopting a pragmatic approach to dealing with left and right issues, but with a more hardened attitude towards the rebel group the Revolutionary Armed Forces of Colombia (Farc).

With cocaine production at record highs and violence continuing, often fuelled by drug gangs, naturally there is festering disillusionment with the peace deal signed between the government and Farc in 2016.

At the time it was hailed as an incredible achievement for his predecessor, Juan Manuel Santos, during his second and final term in office, pushing the rebels along a non-violent political path and forming a political party, the Revolutionary Alternative Common Force, which now has five seats in both houses.

Duque has signalled he is not so willing to accept the status quo, arguing for the rebels to be investigated and punished for past crimes, but the peace deal is unlikely to be rescinded after receiving parliamentary approval.

Euromoney’s country risk survey revealed some unease among contributors during the first and second quarters of this year arising from political risk tied to the elections, with the presidential voting in May and June preceded by parliamentary elections in March.

Colombia’s risk profile has moreover plotted a less convincing path than, say, Uruguay, held back by corruption, organized crime, the effects of migration from Venezuela and an economy weakened by the oil crisis, worsening unemployment.

Yet over time the risk score has improved, and Colombia is considered a medium-risk, mid-ranking option within the third of the five categories of risk in Euromoney’s survey, lying 47th out of 186 countries on a total risk score of 57.7 from a maximum 100 points:

Clearly, there is vulnerability to emerging-markets capital flight linked to US monetary policy tightening and protectionism destabilizing global trade, but no more than other countries similarly affected.

Its capital access score has worsened slightly this year, according to the private opinions of capital-market participants reporting on accessibility to bank finance, and international bond and syndicated loan markets that are incorporated into the risk score.

There is a larger debt burden to finance, too, caused by falling oil and tax revenue, although public spending has been reduced, the budget deficit is narrowing to around 2% of GDP this year and the debt burden is seen peaking at 55% of GDP.

A fresh start under Duque might not be quite as encouraging; there could well be setbacks given that he will need to work collegiately in the house to pass bills.

Yet his desire for consensus sends out positive signs and there is other compelling evidence for a higher credit rating eventually, certainly in comparison with countries ranking lower in the survey:

The important factor is that the economy is now recovering smartly from the oil crisis, causing four of the survey’s five economic risk indicators to improve.

Forecasts published by participating ABN Amro economists predict 2.5% real GDP growth for 2018 and 3% in 2019, after slowing in previous years.

Inflation, which rose sharply in the second half of last year from currency depreciation, has fallen from more than 4%, close to 3%, enabling the central bank to loosen monetary policy by lowering the policy interest rate to 4.25% to support the economy through credit creation.

He notes other positive changes, including income tax cuts and education improvements to bring more economic activity into the formal sector, and infrastructure enhancements to the roads system, including the fourth generation toll road programme.

These are all contributing to higher scores for the survey’s structural risk indicators, which – with other plans likely to be announced when the government gets to work next month – signal Colombia’s prospects are brightening.