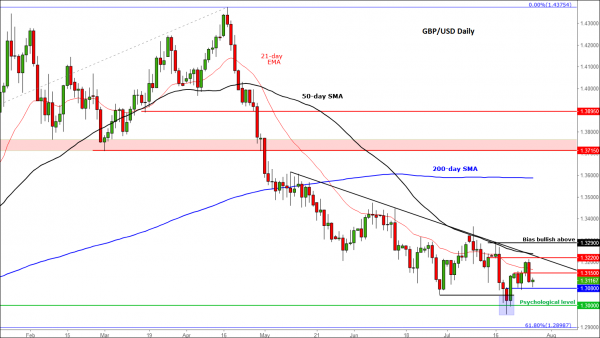 In reaction to today’s US GDP release, the US dollar eased back slightly after it had staged a bounce the day before. As my colleague Matt Weller reported earlier, the first estimate of second quarter growth for the world’s largest economy came in at 4.1% annualised, the highest rate since 2014. Though slightly below expectations of 4.2%, it was still a decent number, particular as personal consumption grew at a solid 4.0% annualised rate, which was well above expectations. But the dollar bulls were not too impressed after all. This was partly because US President Donald Trump had raised expectations that the GDP data could be a blowout figure, which wasn’t the case. So, barring a rally later on today, the greenback looks set to close the week mixed – up against the likes of the euro and Swiss franc and down against the Japanese yen and Canadian dollar. The dollar’s slight recent weakness comes on the back of profit-taking after it had staged a sizeable rally over the past three months or so. Buoyed by solid data, and in turn a hawkish central bank, investors bought the dollar on expectations they will see at least two more rate hikes before the year is out. However, after a three-month rally, some market participants have wondered how much of the bullishness is already priced in. So, they have taken profit and as a result the pace of dollar buying has slowed down. Meanwhile pockets of strength in some other currencies have dampened the appetite for the dollar further. The Canadian dollar, for example, has shown relative strength of late owing to a hawkish central bank, positive domestic data and firmer crude oil prices this week. But ongoing NAFTA uncertainty has capped the upside for the Loonie. Meanwhile, there is a lot on the agenda next week which could lead to significant volatility in the major currency pairs, potentially providing plenty of tradable opportunities. We could see the likes of the pound and yen in particular coming into increased scrutiny, and possibly with positive outcomes. So the dollar could ease back a little further next week.

It has been quite rare to associate the word ‘interesting’ when it comes to the recent Bank of Japan and Bank of England policy decisions, but the outcome of these meetings could turn out to be just that. We will also have lots of important economic data to look forward to next week, including the latest US jobs report. There has been some speculation that the BoJ might scale back its stimulus programme next week, while other reports suggest the central bank will announce changes to the balance of its ¥6 trillion exchange-traded fund buying programme. If the BoJ does indeed alter something then the yen will react. Judging by the currency’s movements this week, speculators clearly think that the move will be contractionary. The Bank of England is widely expected to hike – yes, hike – interest rates by 25 basis points to 0.75%. Although this is the most likely outcome, there’s still some doubts over it. Consequently, the pound should rise on the back of a rate rise as it is not fully priced in, we don’t think. It goes without saying, if the BoE were to hold policy unchanged again then the pound could get pounded. It will also be important to see what the composition of the votes would be. Last time, there were three dissenters out of the nine MPC members when the Bank decided to keep policy unchanged. A unanimous vote to hike would be very bullish for the pound. Also important would be the Bank’s latest economic growth and inflation forecasts that will be published in the Quarterly Inflation Report. Meanwhile, the Fed is also meeting next week but with no press conference scheduled for the US central bank it could be a damp squib event. Still, it will be interesting to see if there are any comments made about it being criticized by Donald Trump recently. In addition to these central banks, we will have some important macro data to look forward to as well. Among other things, these include China’s latest manufacturing PMI, Eurozone CPI, New Zealand employment figures, UK services PMI and US non-farm payrolls report.

Here is a summary of next week’s data highlights:

Given the BoE’s rate decision and the sheer amount of macro data from both sides of the pond, the cable is obviously going to be very busy next week. With the prospects of the dollar easing back and the pound gaining ground, the GBP/USD could stage a recovery next week. In fact, we have already seen some technical indications that the bulls are attempting to halt the cable’s slide. However, we would only turn bullish when and if there is a break in the market structure of lower lows and lower highs next week. The most recent high is at 1.3290. Therefore, if rates go above this level then this would be the confirmation for us to put our bullish cap on.