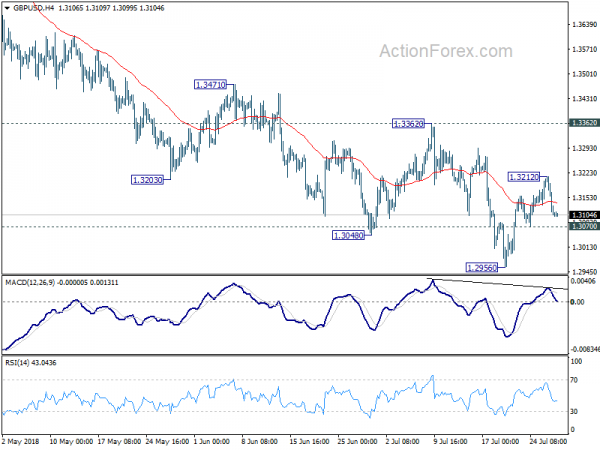 Yen remains generally firm today with help from strength in JGB yields. 10 year JGB yields hit as high as 0.113 and is now hovering at around 0.10. Nonetheless, Yen is outperformed by Canadian Dollar, which is lifted by NAFTA optimism. While the greenback is softer today, downside is relatively limited as it’s supported by the surge in long yields overnight. The greenback will look into US Q2 GDP today. Euro, on the other hand, while recovers, is the weakest one for the week after lackluster ECB press conference. Slowed than expected French GDP growth provides no lift to the common currency too.

Technically, the dip in EUR/USD and GBP/USD yesterday puts near term minor support at 1.1574/1.3070 into focus. Break there will firstly indicate Dollar is regaining near term strength. Secondly, the development could spread dollar buying to other pairs. EUR/CHF’s break of 1.1593 temporary low yesterday indicates resumption of recent fall from 1.1713. 1.1478 support is next target.

Overnight, Mexican Economy Minister Ildefonso Guajardo had “constructive” and “very positive” talks with US Trade Representative Robert Lighthizer on NAFTA renegotiation. He added that both sides agreed to work towards hammering a deal in principal some time in August. And he said “We agree that in order to align the times and to eventually reach an agreement in principle, we should give ourselves the opportunity to move forward and try to bring this to fruition.”

The final format of the agreement remains to be seen as both Canada and Mexico insists on trilateral deal while the US is known for pushing bilateral deals. Another sticky point is the US push for a “sunset clause” which the other two sides firmly disagree to.

US Mnuchin: We’re very focused on the EU trade relationship

US Treasury Secretary Steven Mnuchin said yesterday the US is “very focused on the EU” on strengthening the trade relationship. He said that after Meeting of Trump and Juncker, there is an agreement in principal and the officials planned to move forward to “turn it into real agreement”.

Both sides would immediately focus on steel and aluminum tariffs first “so that there can be no tariffs in either direction”. The issue is expected to be resolved “very quickly”. Mnuchin also said there is an outline already, “in agriculture, in chemicals, in medical devices, in industrial LNG” and so “we’re going to make a lot of progress.

Regarding China, Mnuchin said “if they’re willing to make serious changes just as the EU did yesterday, we’ll negotiate with China any time.” And on NAFTA, he said “hopeful that we’ll have an agreement in principal in the near future.” He also noted that “whether it’s one deal or two deals, so long as we get the right agreement, we’re indifferent.”

US Trade Representative Robert Lighthizer said that the US was close to reaching a broad agreement on NAFTA renegotiations. And he added that “we are in the finishing stages of achieving an agreement in principle that will benefit American workers, farmers, ranchers, and businesses.” And talks were being done at an “unprecedented speed”.

Japanese Finance Minister Taro ago said the G20 meeting in Osaka next year should play the role to ” nip crises in the bud before they develop further.” He also wanted G20 to focus “to promote investment in high-quality infrastructure to ensure economic growth.”

Aso also noted that the G20 finance minister and central banker meeting last week discussed the downside risks to the global economy and reaffirmed the consensus over current issues. However, it should be noted that there was no consensus of the resolutions on US tariffs actions. And the situation could only worsen next year and protectionism rises and spreads.

IMF: Shift from high-speed to high-quality growth in China key for decades to come

IMF said in a report that China’s economy continues to “perform strongly”, with growth projected at 6.6% this year. But it also warned that the country is at a “historic juncture”. The shift from “high-speed” to “high-quality” growth will determine China’s “development path for decades to come”. Risk of “near-term abrupt adjustment” was reduced by recent strong growth momentum and “significant financial de-risking progress”. While there were accelerated rebalancing in some dimensions, “progress slowed” in many other dimensions. Also, while credit growth has slowed, “it remains excessive.

ECB Draghi reiterated the policy path, rates to stay at current level at least through 2019 summer

Yesterday, ECB left interest rates unchanged as widely expected. Main refinancing rate is held at 0.00%, marginal lending facility rate at 0.25%, deposit facility rate at -0.40%. In the introductory statement to the press conference, ECB President Mario Draghi reiterated that the asset purchase target will be lowered to EUR 10B per month after September, subject to data confirmation to economic forecasts. The program will end after December. Interest rates are expected state at present levels through the summer of 2019.

In the Q&A section, Draghi acknowledged that the EU-US trade talks this week was a “good sign” but it’s too early to assess the content of the agreement. Regarding question on Trump’s attack on Eurozone’s currency manipulation, Draghi said it’s known that exchange rate isn’t a policy target of the ECB.

Intraday bias in GBP/USD remains neutral at this point, with focus on 1.3070 minor support. Break will indicate completion of rebound form 1.2956 and turns bias back to the downside for this low. Firm break there will resume larger decline from 1.4376 for 1.2874 fibonacci level next. On the upside, above 1.3212 will bring another rebound. But after all, price actions from 1.2956 are seen as a correction. Hence, upside should be limited by 1.3362 resistance to bring larger decline resumption eventually.