Forex Markets Steady, But Volatility Guaranteed in an Unusually Busy Week ahead 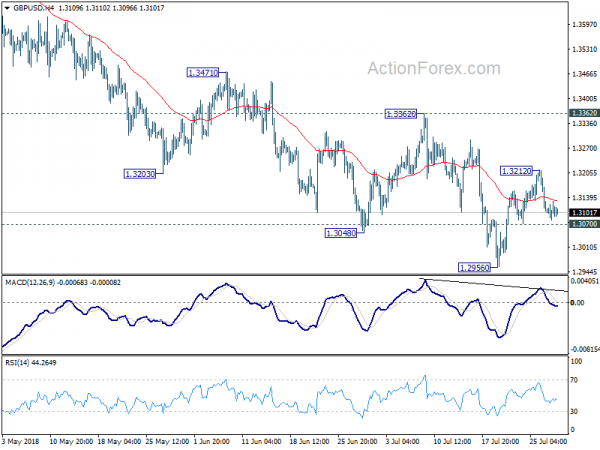 Dollar opens the week broadly firmly, followed by Sterling as the second strongest. On the other hand, Australian Dollar is trading with and broad-based soft tone, followed by Canadian Dollar. Nonetheless, all major pairs and crosses are bound in Friday’s range only, suggesting that they’re in consolidative mode. In other markets, Asian stocks are generally soft with Nikkei trading down -0.68% at the time of writing. Hong Kong HSI is down -0.67% and China Shanghai SSE is down -0.16%. Singapore Strait Times is also down -0.59%. WTI crude oil is hovering in range around 69 as it struggles to regain 70. Gold is a touch softer as recent consolidation continues and is back pressing 1220. 10 year JGB yield hits as high as 0.113 and is pressing day high.

There are an unusually large number of important events ahead, including BoJ, Fed and most importantly BoE. On economic data side there will be ISMs, PCEs, NFP, Eurozone CPI, UK PMIs etc. Volatility in the markets is guaranteed. Technically, we’re staying bullish in Dollar as recent set back is seen as corrective. Immediate levels to watch for us are 1.1574 in EUR/USD, 1.3070 in GBP/USD, 0.997 in USD/CHF, 111.53 in USD/JPY, 0.7309 in AUD/USD. Break of these level will be signal that the greenback is finally regaining some strength.

US Treasury Mnuchin: Four or five years of 3% growth ahead

US Treasury Secretary Steven Mnuchin said in an interview with Fox News Sunday that the growth momentum is a not just a “one- or two-year phenomenon”. And, he added “we definitely are in period of four or five years of sustained 3 percent growth at least”. The comments came after US Q2 GDP released on Friday showed 4.1% growth, highest since Q4 2014.

Mnuchin also said Trump’s administration “absolutely support” Fed’s independence. Regarding Trump’s attack on the Fed, Mnuchin said “these are really more just comments saying, as interest rates are going up, it’s something that the president has a concern.” He also said “we think the Fed will be very careful in managing the economy.”

Trump tweeted earlier this month that “we go up and every time you go up they want to raise rates again. I don’t really – I am not happy about it.” Vice President Mike Pence echoed such comments on Sunday that “we don’t want policies out of Capitol Hill or elsewhere that diminish the tremendous energy that we have in this economy today.”

Support for German Chancellor Angela Merkel’s CDU/CSU has fallen to a 12-year low according to a latest poll. The survey was conducted by public opinion research institute Emnid, published in the Bild am Sonntag newspaper. It’s done between July 19 and 25 with 2001 German citizens.

Results showed supported for Christian Democratic Union (CDU) and its Bavarian sister party Christian Social Union (CSU) dropped -1% to 29%, lowest since 2006. That compares with 33 percent in the September election. Support for Social Democratic Party (SPD) dropped -1% to 18%. The support for far-right Alternative for Germany (AfD) was unchanged at 15%. Support for Greens rose 2% to 12%.

The results also indicate that CSU risks losing its absolute majority in Bavaria in a regional election in October.

After G20 Meeting of Agriculture Ministers in Argentina, the growth issued a statement on Saturday to pledge on reform and criticism protectionism. In the statement, it said that “recognizing the important role of the WTO, we agree to continue the reform process of agricultural trade rules within the given mandate.” Also, “we are concerned about the increasing use of protectionist non-tariff measures, inconsistently with WTO rules.” The group also pledged to “refrain from adopting unnecessary obstacles to international trade”

US Agriculture Secretary Sonny Perdue said on the sideline of the meeting that Trump’s USD 12B in aids are “not going to make farmers whole”.  German Agriculture Minister Julia Kloeckner said farmers “don’t need aid, (they) need trade.” Kloeckner also emphasized that “we don’t want unilateral protectionist measures.” She also warned that “we all know what happens if a single person or country doesn’t adhere to WTO rules, trying to get a benefit for themselves through protectionism,” and “this will usually lead to retaliatory tariffs.”

An unusually busy week ahead

It’s an unusually busy week ahead with three central bank meeting plus a bunch of heavy weight economic data from around the world.

Fed is widely expected to keep federal funds rates unchanged at 1.75-2.00%. The central bank is on course for two more rate hikes this year. Fed fund futures’ pricing also firmed up. For December meeting, they’re pricing in more than 72% chance of a second hike to 2.25-2.50%. It’s up from 57.2% a week ago and 43.9% a month ago. There will be other heavy weight events including ISM manufacturing and services, consumer confidence, personal income and spending, as well as non-farm payroll.

Eurozone will release Q2 GDP but the larger focus would be on whether CPI will stay at 2.0% in July, and whether core CPI will pick up. Nonetheless, ECB is clear with it policy path. Last week’s meeting revealed nothing new as it will keep rates unchanged through the summer of 2019. There was no clarification of the meeting of “summer”. A month of two or data is not going to have any impact on ECB’s forward guidance.

BoE is widely expected to raise interest rate by 25bps to 0.75%. It’s unlikely for the central bank to disappoint given such high expectations. The focus will be on the voting as well as the new inflation report. UK will also release a fresh set of PMI data. The momentum in Q3 will be the crucial factor in determining when BoE would hike again.

BoJ meeting is highlight anticipated, yet it could disappoint most. It’s clear that the discussion regarding tweaking the monetary policy is at a preliminary stage. There is little chance for BoJ to make any drastic announcement. Though, most meeting reactions in Yen and JGB yield should be closely watched.

China’s economic data has been relatively resilient so far despite the threat of trade war. IMF also retained is projection of 6.6% growth in China this year, in its latest report. But the PMI data to be released this week will shed some lights on how confidence is affected by the rising trade tension with the US.

Intraday bias in GBP/USD remains neutral at this point. On the downside, break of 1.3070 minor support will indicate completion of rebound form 1.2956 and turns bias back to the downside for this low. Firm break there will resume larger decline from 1.4376 for 1.2874 fibonacci level next. On the upside, above 1.3212 will bring further recovery. But still, price action from 1.2956 are a corrective pattern. Upside should be limited by 1.3362 resistance to bring larger decline resumption eventually.