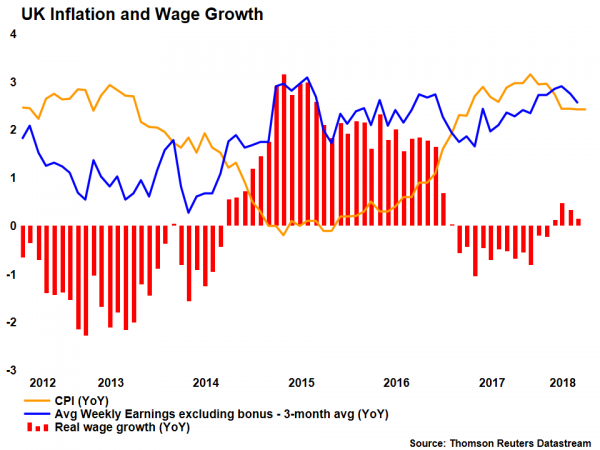 The Bank of England (BoE) is widely anticipated to raise its benchmark interest rate via a 7-2 vote on Thursday, at 1100 GMT. Such a move is practically fully priced in already and thus, price action in sterling will depend largely on the signals the Bank sends regarding the prospect of more rate increases before long. Overall though, even in the unlikely event of hawkish signals, it is difficult to envision a sustained rally in the pound with the Brexit negotiations currently in such an uncertain phase.

The British pound slipped out of the spotlight lately with the Brexit negotiations taking a small break for the summer, but that is likely to change tomorrow, when the BoE announces its policy decision on “Super Thursday”. The term implies that besides the rate decision and meeting minutes, the Bank will also release updated economic forecasts, which Governor Carney will present at a press conference following the gathering.

A 25bps rate increase to 0.75% is now all but priced in, with the implied probability for such action currently resting at 88%, according to the UK OIS. Hence, although the pound could get a minor, knee-jerk lift from the actual rate increase, the currency’s overall direction may be dictated by other factors – such as the vote count and any signals regarding the prospect of another move before long. The vote count is expected to come at 7-2 in favor of a rate increase. Should fewer than 7 officials vote for a hike, that would send the message that future moves are less likely, and vice-versa.


In terms of economic data, underlying inflationary pressures have moderated substantially lately, with the core inflation rate dropping to 1.9% in June, below the Bank’s 2.0% target. Wage growth has also cooled, and combined, these suggest there is little need for an immediate rate increase. That said, the unemployment rate has remained very low, while survey-based measures of economic growth – such as the PMIs – suggest the economy regained some momentum in Q2 following a slowdown earlier, justifying to an extent the elevated expectations for a hike.

While markets appear near-certain that a rate increase will occur this month, implied pricing suggests that the next 25bps hike is fully factored in only for September 2019, which suggests investors anticipate more than a full year’s pause in policy action after this one. Sure, UK economic data have not been great lately, but this is a pricing so pessimistic that it probably goes beyond the realm of economics. It likely incorporates some doubts as to whether a Brexit trade deal will actually be struck.

Note though, that the BoE is operating under the assumption that there will, eventually, be a Brexit deal that ensures a smooth transition. Based on this assumption, there is a risk the Bank signals the markets that they are underestimating the likely path of rate increases, which would probably be the most bullish scenario for sterling. In such a surprising outcome, the currency is likely to surge. Technically, advances in sterling/dollar could encounter immediate resistance near 1.3215, the high of July 26, before attention turns to the 1.3360 zone, defined by the peaks of July 9. Even higher, the 1.3450 area would increasingly come into view.

Conversely, the most bearish scenario for the pound would be that of no rate hike at all, given that one is almost fully factored in already. Such an outcome could see sterling/dollar breaking below 1.3050 to challenge its 10-month lows at 1.2955. Even larger downside extensions could stall near 1.2850, the low of August 31, 2017. However, this is also quite unlikely to occur, as policymakers would typically have tried to communicate that a hike is in doubt prior to the meeting, to avoid unwarranted volatility.

Instead, the most realistic scenario appears that of a so-called “dovish hike”, where the BoE raises rates as expected but does so with a split 5-4/6-3 vote, and/or accompanies any rate increase with cautious commentary from Governor Carney in the subsequent press conference. This could send the pound lower, albeit not massively.

Ultimately, even in case of a surge in the pound on the rate decision, it is difficult to envision a sustained rally in the currency solely on the back of hawkish policy signals at a time when the Brexit negotiations are in such an uncertain phase. While it is true that the pound could explode higher on any signs of an EU-UK Brexit agreement, we are not quite there yet, and with the negotiations now on a summer break, this is unlikely to materialize for a while still. Moreover, with the economy being decent but not strong, there seems to be little motivation for the BoE to fuel market expectations for faster hikes, and risk damaging its credibility later on if it wishes to backtrack. Therefore, any rallies in the pound may remain relatively limited in the foreseeable future, at least until – and if – a Brexit deal is seen as being near its completion.