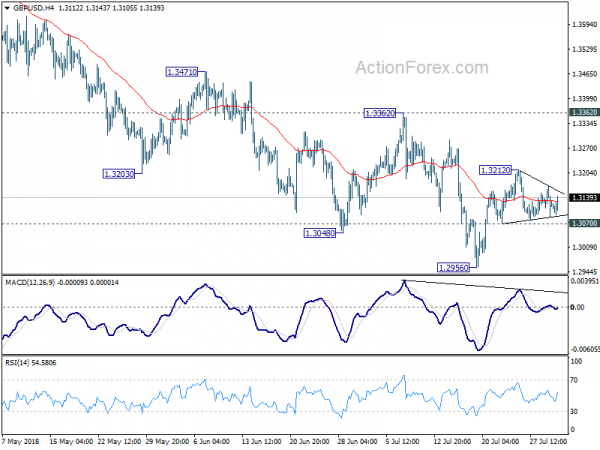 Dollar pares back some of today’s gain in early US session. The better than expected ADP employment data provides no lift to the greenback. Focus will be turning to ISM manufacturing and FOMC rate decision. Nonetheless, as at the time of writing, Dollar is still the second strongest one for today, just next to Sterling. The Pound is apparently supported by not-too-bad UK PMI manufacturing data. Sterling’s fate will depend on whether there will be a “dovish hike” by BoE tomorrow. Euro follows as the third strongest. On the other hand, commodity currencies are generally lower, with New Zealand, Australian Dollar and Canadian Dollar as the weakest three.

On development to note is the strong and immediate reaction in Chinese stocks to renewed threat of US-China trade war. It’s reported that Trump is considering to impose 25% tariffs on USD 200B in Chinese imports, rather than 10%. The announcement could be made as soon as today. The China Shanghai SSE composite closed down -1.8% to 2824.53. The development argues that recent rebound is completed and the index might be ready to head south to retest 2016 low at 2638.30. This will be a key development to watch given that there is still no sign of either side backing down.

US ADP grew 216k, tariffs have yet to materially impact jobs

US ADP report showed private sector jobs grew 216k in July, above expectation of 186k. Prior month’s figure was also revised up from 177k to 181k. Commenting in the release, Ahu Yildirmaz, vice president and co-head of the ADP Research Institute, said “the labor market is on a roll with no signs of a slowdown in sight.” And, “nearly every industry posted strong gains and small business hiring picked up.” Mark Zandi, chief economist of Moody’s Analytics, said, “The job market is booming, impacted by the deficit-financed tax cuts and increases in government spending. Tariffs have yet to materially impact jobs, but the multinational companies shed jobs last month, signaling the threat.”

FOMC rate decision is a major event ahead. But we’re not expecting any surprise from Fed. The central bank is on course for two more rate hikes this year, one in September and another in December. There is no press conference today. Focus will be quickly turned to minutes to be released later on August 22.

UK PMI manufacturing dropped to 54.2, BoE could find some cause for pause

UK PMI manufacturing dropped to 54.0 in July, down from 54.3 and missed expectation of 54.2. Markit noted weaker increases in both output and new orders. Also, intermediate goods production falls for first time in two years. Rob Dobson, Director at IHS Markit, said in the release that UK manufacturing “started the third quarter on a softer footing, with rates of expansion in output and new orders losing steam”, and ” failed to provide any meaningful boost to headline GDP growth through the year-so-far.”

Also he noted that “the financial markets still seem to have an interest rate increase nailed on for August.” But, “if the combination of weaker growth and a softening of pipeline cost pressures at manufacturers is mirrored in the larger service sector, the Bank of England’s decision will be far from unanimous and they may even yet find some cause for pause.”

The UK National Institute of Economic and Social Research release an article “Prospects for the UK Economy” yesterday. It warned that the economy is “facing an unusual level of uncertainty because of Brexit”. Such “uncertainty primarily stems from the yet to be defined relationship between the UK and the EU”, as well as “the economy’s response to the new framework once it emerges.” And it criticized Prime Minister Theresa May’s Brexit white paper for failing to “unite the government or Parliament”, thus “leaving open an entire spectrum of possible outcomes.”

The NIESR conditioned its economic forecast with a 25bps BoE rate hike this month, that is, tomorrow. That’s also under the assumption of a “soft Brexit”. The economic is expected to grow at potential with GDP up 1.4% this year, and 1.7% next year. But “risks to our GDP growth forecast are wider than before and tilted to the downside.”

NIESR also urged BoE to take account of the uncertainty of Brexit when setting policy and “also weigh the consequences of ‘getting it wrong’.” That is, It urged BoE to “stand ready to move in either direction should circumstances change.” BoE should “emphasise the uncertainty (rather than the certainty) of its future policy stance in its communications and its willingness to reverse its decisions.”