Fed Set For ‘Hawkish Hold’? Trade Back In The Spotlight 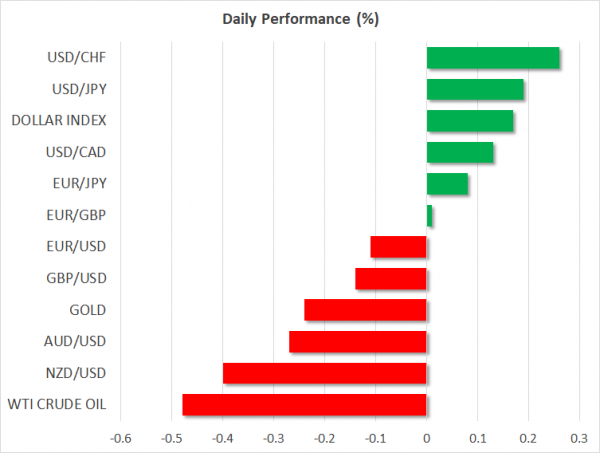 FOREX: The US dollar index is higher by 0.17% on Wednesday, ahead of the Fed policy decision at 1800 GMT, and building on the gains it posted in the previous session. The yen continued to retreat yesterday after the BoJ implicitly signaled it will keep its policy rates ‘low for longer’. The aussie and the kiwi both took a modest hit overnight, after media reports suggested the US may impose ‘heavier’ tariffs on Chinese imports to ramp up the pressure on Beijing.

STOCKS: Wall Street closed higher on Tuesday, aided by reports that the US and China are looking to restart talks aimed at deescalating trade tensions between them. The Nasdaq Composite (+0.55%), S&P 500 (+0.49%), and Dow Jones (+0.43%) all advanced. Meanwhile, futures suggest a relatively flat open for the Dow and S&P today, but the Nasdaq 100 is expected to open much higher, likely lifted by Apple reporting strong earnings after the closing bell. Elsewhere, Asia was mixed on Wednesday. Whereas Japan’s Nikkei 225 and Topix climbed by 0.86% and 0.94% respectively, boosted by a weaker yen, the Hang Seng in Hong Kong dropped by 0.63%, weighed on by separate reports the US may impose heavier tariffs on China. In Europe, most benchmarks were expected to open lower today, futures suggest, with the only exception being the French CAC 40.

COMMODITIES: Oil prices dropped on Tuesday and are lower on Wednesday as well, as a combination of a stronger dollar, fresh signs of US-China trade tensions, and a surprising buildup in the private API crude inventory figures all took their toll. WTI is down by 0.47% to $68.21 per barrel, while Brent fell by 0.35% to $73.81 a barrel. Today, all eyes will turn to the official EIA weekly stockpile data. In precious metals, gold continues its ‘summer lull’, trading in a narrow range between $1,235 and $1,211 an ounce since July 18. A break in either direction could determine the next directional wave.

The Japanese yen continued to tumble following the BoJ meeting, as the theme of monetary policy divergence came back to the fore. With the BoJ confirming it will continue to keep yields on Japanese bonds capped at low levels while other major central banks such as the Fed are raising rates, interest rate differentials may widen even further, rendering the yen less attractive relative to currencies like the dollar. Hence, absent some ‘risk off’ episode that drives safe-haven flows into the yen, changes in relative interest rates could continue to keep the Japanese currency under pressure.

After what seemed like a brief ‘summer pause’, US-China trade tensions came back to the spotlight yesterday. Stock markets initially got a boost by a Bloomberg report that the US and China are trying to restart trade talks in order to deescalate tensions. The optimism didn’t last though, with reports a few hours later suggesting Washington will propose raising to 25% its planned 10% tariffs on $200bn worth of Chinese imports – a move aimed at pressuring Beijing. High-yielding currencies took a hit, with aussie/dollar and kiwi/dollar trading lower by 0.27% and 0.40% respectively today. The kiwi was also dragged down by a surprising uptick in New Zealand’s unemployment rate for Q2, released overnight.

Overall, while the trade headlines appear contradictory at first glance, they are nevertheless in line with the Trump administration’s method of operation thus far: ratchet up pressure first, before negotiating a favorable deal. Stocks and high-yielding currencies will likely remain sensitive to incoming headlines, reacting positively to any signs of negotiations, and negatively to any fresh escalation.

Meanwhile, the dollar index managed to end the day higher, despite a slight miss in the Fed’s preferred inflation measure. The core PCE price index for June rose by 1.9% in yearly terms, missing the forecast of 2.0%, with the previous print also revised down to 1.9%. That said, the rest of the US data – including personal income and spending – were in line with expectations, reaffirming the US economy closed Q2 on a strong footing. Today, all eyes will be on the Fed decision (see below).

Day ahead: Trade back in the forefront; Fed to deliver a ‘hawkish hold’?

The conclusion of the Federal Reserve’s meeting on monetary policy is likely to be gathering most interest out of Wednesday’s trading, alongside fresh developments on global trade, namely the US-China spat.

The eurozone’s final manufacturing PMI for July due at 0900 GMT is expected to be confirmed at 55.1, which would constitute the first advance for the gauge after declining for six straight months. Germany and France’s respective PMI prints will be made public at 0755 GMT and 0750 GMT correspondingly.

At 0930 GMT, manufacturing PMI figures for the UK will be released as well. The measure is projected to ease to 54.2 from 54.4 in June. Unlike the eurozone which sees the release of preliminary estimates as well, the UK is on the receiving end of one and only print, something which might render sterling more sensitive to the UK figure. It should be said, though, that the number is unlikely to change much ahead of tomorrow’s Bank of England meeting; market participants are widely expecting the delivery of a 25bps rate increase.

Out of the US, the ADP’s employment report on the number of positions added to the economy by the private sector is due at 1215 GMT, with analysts projecting the addition of 185k positions in July from 177k in June. This report is sometimes viewed as a preamble to the nonfarm payrolls one (out on Friday) which covers both the public and private sectors, though it should be stressed that the two are not as strongly correlated nowadays.

Other data out of the US will pertain to Markit’s manufacturing PMI for July (1345 GMT), June’s construction spending (1400 GMT), the ISM’s manufacturing prices paid for July as well as the institute’s manufacturing PMI for the same month (both due at 1400 GMT). As regards the latter, it is forecast to weaken a bit from June’s 60.2, though to still comfortably remain in expansion territory at 59.5; any number above 50 denotes sectoral growth. Meanwhile, the figures for July’s total vehicle sales out of the country are scheduled for release at 1930 GMT.

But the relative focus will be on the US central bank’s decision on interest rates which will be hitting the markets at 1800 GMT alongside the accompanying statement. The absence of a pr