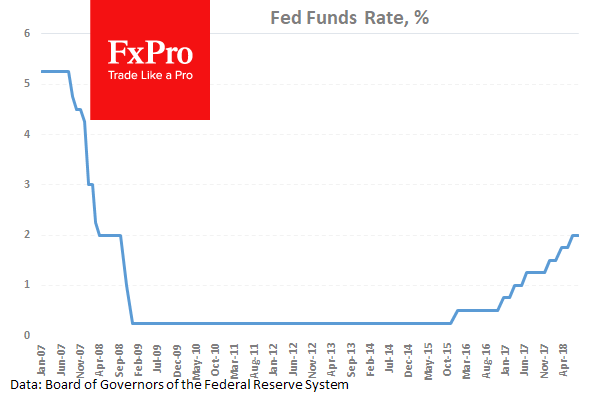 The US Fed kept its interest rates unchanged and indirectly confirmed the pace for further tightening of the monetary policy. The Fed noted the labour market strengthening, as well as the strong growth in household spending and business investment. The commentary did not provoke any big market reaction as it had expected such outcome. However, it is worth noting that the probabilities of the hike in December increased. This process provides the dollar with moderate support, it adds the third day in a row and is traded near 94.50 at the time of writing.

Also, U.S. Dollar was supported by strong employment report from ADP. The company noted an increase in the number of private sector jobs in the U.S. by 219K, which brought back the rate of growth to the strong numbers as it was at the beginning of the year. The dollar index returned to the end of last week, but in general the developed markets keep calm tone of trading.

At the same time, Asian bourses restarted their downturn on the new portion of fears around trade wars, amid the increased pressure from the U.S. president administration that threatened to raise the tariffs for imports from China up to 25% against 10% earlier. Chinese stocks are losing more than 1% in the morning, quickly returning to the area of one-year lows achieved last month. The Chinese yuan also remains under pressure, trading in the 13-months lows.

New evidence that Fed sticks to its plan for 4 hikes this year and the “flexibility” of the Bank of Japan with 10-years notes yield have the biggest impact on the emerging markets. The capital outflows from EM may increase due to the interest rates spread failing to the U.S. rates, as well as the fears that trade conflicts would significantly slow the economic growth in the Asian region.

Elsewhere the Turkish lira fell to new historical lows after the reports that the United States had imposed sanctions against Turkish officials who had participated in the detaining of the American pastor. USDTRY rose to 5.0, losing more than a third of its value since the beginning of the year.