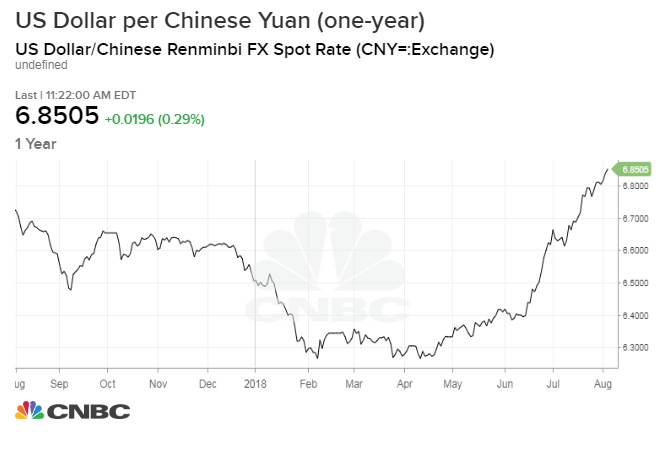 Hayman Capital Management founder Kyle Bass said the U.S. has the upper hand during trade negotiations with China and doesn’t see the depreciation of China’s currency as problematic.

“The Trump administration’s lack of predictability is an asset to the U.S. in two areas, I think,” he said. “In our trade negotiations with China and in our, let’s say, other negotiations with North Korea. I think that the fact that we only export about $100 billion or $130 billion worth of goods to China while we import almost $500 billion from China – we’ve got the leverage to really work through this tariff and trade war.”

Markets have scrutinized U.S.-China relations ever since the White House imposed tariffs on $34 billion of Chinese imports earlier this year, which were met with retaliatory charges by Beijing.

China’s import taxes would range from 5 to 25 percent, the Ministry of Commerce said in a release on its website. There are four lists of goods, one for each of the rates proposed. Many of the goods are agricultural related, with others being various metals and chemicals.

The possibility of an escalating trade war prompted market speculation that the Chinese government will use a weaker currency to fight the effect of tariffs and triggered complaints from Trump on the strength of the U.S. currency and the Federal Reserve’s plans to raise U.S. interest rates.

But Bass also downplayed the currency fears, saying that the U.S. consumer isn’t likely to see any major effect from the growing dispute.

“President Trump is kind of whining about devaluation of the Chinese currency and saying that that’s – worrying that will bring higher prices and it doesn’t,” Bass added. “All a devalued Chinese currency does is broaden the cost across the Chinese population. The dollar cost of goods to U.S. consumers stays the same. China has to either take the hit in price or in quantity; in the U.S., the dollar cost literally stays the same of anything that we put tariffs on in China. I think those pundits that argue to the contrary — there’s no evidence to suggest that’s true.”

China’s currency has slid since mid-June after hovering around at higher levels from February through May. Since June 14, it has lost about 6.5 percent. The dollar strengthened to its highest level in more than one year against the yuan, also called the renminbi, on Friday to around $6.89.

Bass is founder and managing partner of Hayman Capital Management. He is known for profiting and betting against subprime mortgages during the financial crisis in 2008. In February 2016, Bass said he devoted much of his fund to bet against the yuan, predicting it would depreciate by as much as 30 to 40 percent.