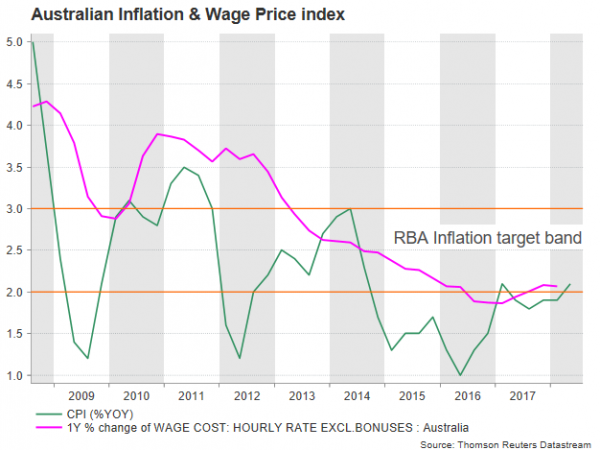 On Tuesday the Reserve Bank of Australia is scheduled to announce its monetary policy decision at 0430 GMT and markets are almost certain that the central bank will maintain interest rates at record lows as it did over the past two years. A rate statement will accompany the decision as usually, with fears over a growing global trade war and debt risks in Australia probably being once again the main catalysts feeding the Bank’s accommodative strategy.

Headline inflation managed to just break into the RBA’s target range of 2-3.0% in the second quarter, coming in 0.2 percentage points higher at 2.1% year-on-year (y/y). While this seems to be good news for RBA policymakers, latest data out of the labour market showed that real wages stagnated as earnings and prices grew at the same pace of 2.1% y/y, a piece of evidence hinting that interest rates should not move higher yet at a time when consumers have no sufficient economic strength to meet their tremendous debt obligations. Therefore, policymakers could refrain from raising rates unless they see wages rising substantially above inflation.

Trade developments could be another source of uncertainty given the nonstop escalation in the US-Sino trade relations. Although Australia is one of the countries exempted from US import tariffs on steel and aluminum, US trade measures on those metals as well as on other potential products in target could indirectly affect the country’s welfare given that China is Australia’s top trade partner both in terms of exports and imports. Should US trade barriers squeeze China’s business activities and hence put breaks on the country’s economic growth, demand for Australian products could go downhill. Something not evident so far as last week’s figures published by the Australian Bureau of Statistics showed that goods exported to China including iron ore and manufactured items reached the second strongest growth in record.

Turning to forex markets, aussie/dollar has been trading sideways around one-year lows since the end of June, with trade concerns, weak Australian wages and growing expectations of further monetary tightening by the Fed later this year making the pair less attractive to buy. Investors, who currently see no change in RBA’s monetary strategy until late 2019, could reduce their exposure on the aussie if the rate statement uses a stronger language to highlight risks arising from the US-Sino trade conflicts that could end up to a full-blown global trade war. In this case, the sell-off could drive aussie/dollar down to the 0.7300 key level where a floor has been created over the past two months. Steeper declines could also find support at the 0.7200 round level which could be of psychological significance.

Alternatively, if policymakers put more weight on local economic developments, cheering the signs of strength in the labour market and rising inflationary pressures, the aussie/dollar could move to the upside on speculation that despite growing trade risks, the Bank could feel more comfortable to raise rates if the data continues to impress. In this case, aussie could return back above 0.7400, with scope to break July’s 10 high of 0.7480. A stronger bullish move could also target the area around 0.7580 where the market stopped several times in May.