Sterling Sold Off on Worries of No-Deal Brexit, Dollar Strong 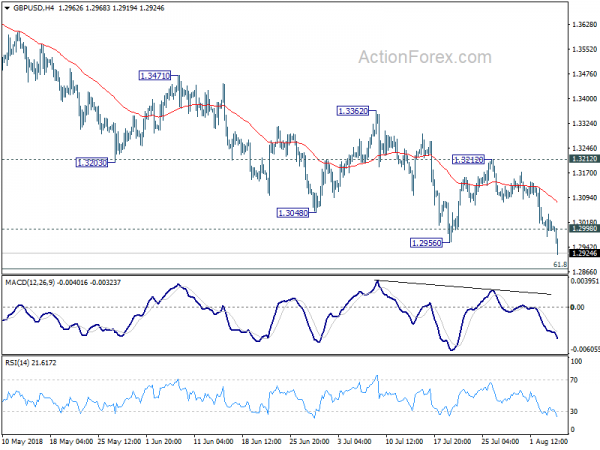 Sterling is trading as the weakest major currency today as the talks on no-deal Brexit heat up. UK Prime Minister Theresa May’s spokesman tried to tone down the risks but the markets simply don’t listen. Swiss Franc follows as the second weakest as major European indices rebound. in early trading. But the Franc could make a come back as European stocks struggle to extend gain and reverse. On the other hand, Dollar continues to benefit from trade war and is the best performer for today so far. In particular, USD/CNH (offshore Yuan) found its footing and is back above 6.86. Australian Dollar follows as the second strongest but that’s mainly because it’s cautiously awaiting tomorrow’s RBA rate decision. Yen is the third strongest one.

Technically, GBP/USD takes the lead and breaks 1.2956 support today. Larger decline from April high at 1.4376 has resumed. EUR/USD is heading to equivalent support at 1.1507 and break should confirm resumption of down trend from 1.2555 (February’s high). USD/CHF’s break of 0.9977 minor resistance now aligns with EUR/USD and GBP/USD. Further rise would be seen back to 1.0067 resistance.

Prime Minister Theresa May’s spokesman tried to tone it down and said “We continue to believe that a deal is the most likely outcome because reaching a good deal is not only in the interests of the UK, it is in the interests of the EU and its 27 members.” Nonetheless, the spokesman also said that Fox is right to said there is risk of a no-deal. Meanwhile, the government is prepared for “all eventualities.

UK Trade Minister Liam Fox said in an interview with the Sunday Times that he saw “not much more than 60-40” chance of a no-deal Brexit. And he put the blame on EU as the “intransigence of the (European) commission is pushing us towards no deal.” He also warned that if EU chooses “theological obsessions of the unelected” over “economic wellbeing of the people”, then it’s a “bureaucrats’ Brexit, not a people’s Brexit”. He went further and said it’s up to EU to choose “ideological purity” or “real economies:”

According to a poll of FTSE 350 businesses by ICSA: The Governance institute, 55% of respondents predict a decline in the UK economy in the next 12 months. While it’s an improvement over 69% in Winter 2017, it’s still overwhelming pessimistic. Peter Swabey, Policy and Research Director at ICSA, said “it is hard to see any other reason for continuing pessimism over the economy other than the ongoing Government infighting over Brexit and the lack of a clear plan if there is no deal at the end of the negotiations”.

Separately, Iain Wright, the ICAEW director of corporate and regional engagement also said “With the increase in the regulatory burden along with the uncertainty with Brexit, global trade disputes and weak economic data, it is not surprising that confidence is so fragile.” He referred to the survey of chartered accountants which showed business confidence fell significantly over the past three months. And, “the lack of clarity for UK plc has continued for far too long and, without significant action by government, the fragility in confidence will be prolonged. Businesses are fast running out of time to get prepared and are rightly anxious about an expected further wave of regulation, dampening confidence and impacting upon growth.”

Eurozone Sentix Investor Confidence rose to 14.7, all-clear in trade dispute with US

Eurozone Sentix Investor Confidence rose solidly to 14.7 in August, up from 12.1 and beat expectation of 12.8. Current situation index rose from 36.8 to 33. Expectations index also improved from -10.0 to -5.8. Sentix noted that the indices “reflect less the danger of a general turnaround”. Instead, they point to a “cooling of phase”. Also, the data “reflect a certain all-clear in the trade dispute with the US after EU Commission President Juncker succeeded in preventing a further intensification of the conflict in negotiations with US President Trump.”

Also released from Eurozone, German factory orders dropped -4.0% mom in June, much worse than expectation of -0.3%.

PBOC announced last Friday to impose 20% reserve requirement ratio (RRR) on onshore (CNY) FX forward transactions. Despite the central bank’s denial, the move is obviously to moderate recent sharp depreciation of the Yuan (Renminbi). But the impact is so far rather limited. USD/CNH (offshore Yuan) edged lower to 6.8195 but is now back above 6.86. It could be heading back to 6.9 handle.

Given our view that the trade conflict would continue for some time, risk is skewed to the downside for Yuan. Therefore, we expect more capital control measures to be announced following the re-introduction of the FX reserve requirement. The FX reserve in August (to be released this week) would be closely watched. We will not be surprised to see a drop in FX reserve as the government might have intervened to defend the Yuan. More in PBOC Imposes FX Reserve Requirement as Renminbi Selloff Gets Alarming

New Zealand Treasury: Any RBNZ tightening remains some time away