Sterling The Worst Performer, Aussie Weaker Ahead Of RBA Decision 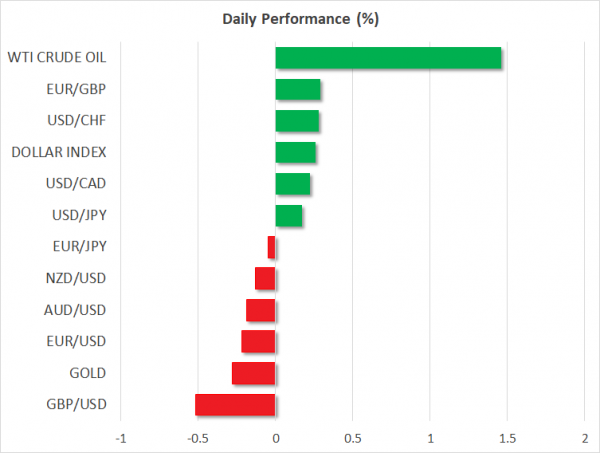 FOREX: The dollar index, which gauges the greenback’s strength against a basket of six major currencies, was trading higher by around 0.25%, with euro/dollar being down by 0.20% and trading around the 1-year low of 1.1530 despite Eurozone’s Sentix investor confidence index for the month of August surprisingly improving for the second month. Dollar/yen moved higher by 0.15% above the 111.00 psychological level. Pound/dollar plummeted to an 11-month low of 1.2932 on Monday (-0.52%) as comments by UK officials about Brexit generated fears that Britain could end up leaving the European Union without a secure trade agreement. In the antipodean sphere, aussie/dollar traded lower by 0.18% ahead of the RBA rate decision early on Tuesday, while kiwi/dollar was down by 0.13%. Dollar/loonie rose by 0.21%, erasing some previous losses. Meanwhile, the Turkish lira dipped to another fresh record low against the greenback, after the US administration said it was reviewing Turkey’s duty-free access to the US market. Dollar/lira surged by 2.10% to 5.17.

STOCKS: Major European benchmarks traded higher for the most part, though their gains were limited. The pan-European STOXX 600 and the blue-chip Euro STOXX 50 were up by 0.11% and 0.30% respectively at 1030 GMT. Meanwhile, the UK’s FTSE 100, German DAX and the French CAC 40 were moving up by 0.05%, 0.29% and 0.14% correspondingly. However, the Spanish IBEX 35 moved marginally lower by 0.04%. Futures tracking the S&P and Dow are currently in negative territory, while those following the Nasdaq 100 are higher, pointing to a positive open today.

COMMODITIES: Oil prices rose on Monday as Saudi Arabia crude production posted a decline in July and US drilling appeared to slow. West Texas Intermediate (WTI) advanced by 1.31% above the $69/barrel level , while Brent oil climbed by 1.02% around the $74 handle. In precious metals, gold dropped by 0.28% today to $1209 per ounce, holding just above the 17-month low of $1204. Also, copper plunged by 1.14%.

Day ahead: Trade story to remain under the spotlight; RBA to stand pat on rates

In the absence of major data releases, investors will be eagerly waiting for fresh headlines regarding the ongoing US-Sino trade war to allocate their positions. During the weekend, tensions between the nations escalated even further after Trump defended his tariff strategy again, highlighting the US’s bargaining power in the trade game. In return, China, which unveiled new tariffs on 5,207 US imported products worth $60 billion on Friday (the value of goods is less than half the US has proposed to target), said that “such methods of extreme blackmail will not bear fruit against China”, sending the message that China will not be afraid to take stricter retaliatory actions against its US counterpart in the future. Should the countries continue the war of words, investors could increase their demand for safer assets such as the Japanese yen and US government bonds. Still, the dollar could remain resilient on expectations of further monetary tightening by the Fed this year.

US-Turkish relations do not seem to be getting better either, with the Turkish lira hitting fresh record lows on Monday against the greenback following news that the US administration is closely reviewing Turkey’s duty-free access to the US market. The news raised a flag that Turkish goods exported to the US could soon face costs, a warning coming just after Turkey decided to freeze the assets of two key US officials on Saturday. This also follows last week’s US sanctions imposed on Turkey’s Interior and Justice ministers.

Meanwhile in Australia, the focus will turn to monetary policy and the Reserve Bank of Australia’s rate decision early on Tuesday at 0430 GMT. While the latest economic releases out of the country brought smiles to the faces of policymakers, with GDP growth rising faster than expected and inflation breaking marginally into the RBA’s range price target of 2-3.0%, the Bank is widely expected to keep rates unchanged at a record low of 1.5% for the 23d consecutive time. Policymakers could explain through the rate statement published along with the rate decision that an accommodative policy might still be needed at a time when highly indebted consumers continue to face subdued wages and growing global trade risks remain a threat to the Australian trade outlook. Note that China is Australia’s biggest export partner and any economic deterioration in China could negatively affect Australia’s welfare.

Overnight, Asian traders will also see the release of Japanese household spending for the month of June at 2330 GMT. Analysts believe that consumption has returned to positive territory on a monthly basis, increasing by 1.7% after declining by 0.2% in May. However, in yearly terms, the gauge is expected to drop by 1.6%, less than it did in the previous month when it plunged by 3.9%, the strongest downfall recorded since September 2016. Yet, given that the safe-haven yen tends to be less sensitive to data releases, not much reaction is expected by the Japanese currency.