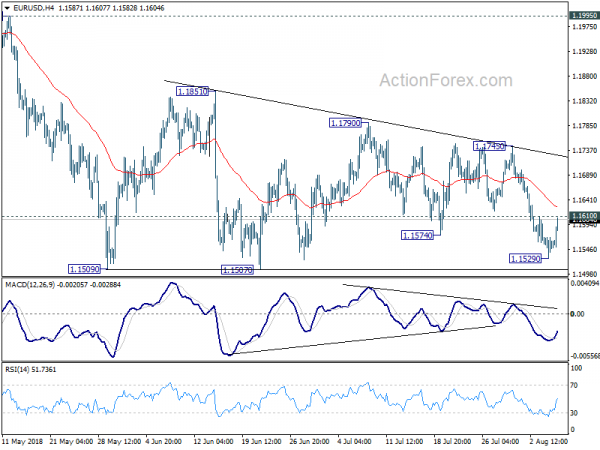 Dollar trades broadly lower today and selloff accelerates in early US session. EUR/USD’s reversal ahead of 1.1507 key support level is a factor pressing the greenback. The Chinese Yuan is also attempting another rebound after yesterday’s brief setback, with USD/CNH back pressing 6.82.

With the help of easing risk aversion, Australian Dollar is trading as the strongest one today, followed by Euro. Sterling is the second weakest one as worries over no-deal Brexit continues to weigh.

Technically, Euro is a major focus in the current session. EUR/USD’s immediate focus in on 1.1610 minor resistance. Break will confirm bottoming and EUR/USD should then start another rising leg in the consolidation pattern from 1.1509, targeting 1.1745 resistance EUR/GBP is now pressing 0.8957 key resistance. Decisive break there will resume medium term rally from April low at 0.8620.

The Chinese State Administration of Foreign Exchange said in its website that at the end of July this year, the country was holding USD 3.1179T in foreign exchange reserves, up USD 5.8B, or 0.19% from end of June.