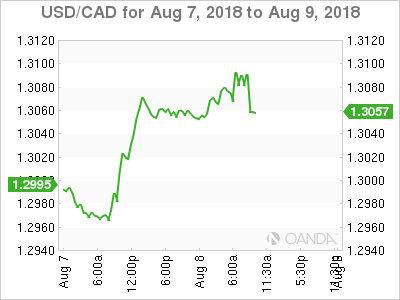 It’s being reported by FT that the Saudi’s are selling off Canadian assets in response to Ottawa’s criticism of the arrest of a female activist last week.

Apparently, the Saudi central bank and state pension funds have been instructed to dispose of their Canadian equities, bonds and cash holdings.

There is no Canadian dollar amount being proposed, but its believed that Saudi funds have in excess of +$100B invested in overseas markets. Canada’s proportion should be a small percentage.

Currently, markets have been looking at Canada’s recent economic strength and wondering if Bank of Canada (BoC) is on target to hike rates at next months policy meeting.

Last weeks Canada’s GDP and Trade balance reports beat markets expectations and give CAD/USD a lift to C$1.2967 on Aug 3. Given Governor Poloz’s commitment to moving gradually and his concern over the economy’s sensitivity to rate rises, a September move is becoming more remote, especially without a signed Nafta deal.

Friday’s Canadian employment numbers should have an impact, especially if we get another strong headline print – +18Ke vs. +31.5K for June. Many are also expecting the unemployment rate to improve a tad to +5.9% vs. +6%.